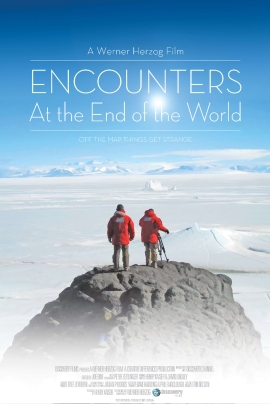 There’s weirdos everywhere you go. Especially in the Antarctic.

Infamously well-known film-maker Werner Herzog decides that he’s had with normal, everyday society and travels all the way to the Antarctic community of McMurdo Station, the current headquarters of the National Science Foundation and only home to roughly around 1,100 people during the austral summer, which is October to February). While Herzog initially expects for himself to be enamored with the beautiful sights and all of the lovely, exquisite creatures that this land has to offer, eventually, as Herzog typically does, he gets a tad bit distracted from the all of the beautiful sights and starts paying more and more attention to the citizens of this land and just how they get by, being so far away from the rest of the world. This leads Herzog to interviewing many colorful and crazy characters, like marine biologists, physicists, plumbers, and truck drivers – all of whom have a story to tell and all tell it to Herzog, even if he never quite knows just what he’s getting at.

But then again, with this being a Werner Herzog documentary, are you at all surprised?

Encounters at the End of the World is a brave and beautiful documentary that works on two formats. One way, it’s a nature documentary that could definitely be broadcast on the Discovery Channel, highlighting all of the surreal and powerful beauty of this land and the creatures that inhabit it. But on the other way, it also works as one of Herzog’s adventures into the mind and soul of people we don’t normally see in movies, let alone, ever hear about. It’s typical for Herzog to do this in his documentaries, but here, it feels a whole lot more unncessary and almost annoying.

Because, to be honest, there’s a lot of beauty lying underneath the surface of the flick, and not just through its visuals, either. Herzog travels to this land, obviously, to figure out more about the Antarctic, the way its being preserved and, honestly, how much longer it all has before its one big swimming pool. While there’s definitely an underlying global warming and environmental message talked about here, Herzog doesn’t hit us over the head too much with it – he knows that this beautiful piece of nature should be conserved and held in the highest most priority of everyday citizens who really care about this world that we believe in, but he also knows that sometimes, it’s best to leave those ideas up in the air and not always hammer away at them.

Watching this flick and seeing all of the insanely brave that Herzog and his crew is able to capture, honestly puts you in the mind-set of wanting to save the world for all that it is. This may not have been Herzog’s intention in the first place, but it’s still a friendly reminder that out there, in the deepest regions of the world, there’s some real beauty. Sometimes, we just need to see it to believe in it fully.

Then again, Herzog doesn’t really focus on these finer points too much, as his mind wanders, from person to person, as what tends to always happen with his flicks.

Which is sometimes fine, however here, it gets in the way of what could have been a much more focused, much more understated documentary about the great, big world. He gets some interesting interviews out of these odd townsfolk, who have a lot more on their mind than you’d expect them to, but really, it’s Herzog’s sometimes innane line-of-questioning that always gets me. Why on Earth is he so interested in penguins having sex? Or better yet, whether there are any gay penguins in the first place?

Sure, it takes someone as zany as Herzog to ask these questions, but do they really need to be asked? Can’t we just sort of leave them on the floor, pick them up later, and, possibly, just Google them? Yeah, we probably, actually, most definitely can, but for some reason, Herzog feels the inspiration to ask these odd questions and they don’t do much, except stop the flick in its tracks.

So yeah, in a way, Encounters at the End of the World is, essentially, two movies, ripped-together into one. It’s not necessarily a cohesive piece, as much as it’s just an interesting one that seems to have greater aspirations than just looking and pointing at its pretty sights, but sometimes, the deeper and meaningful questions don’t always work, especially when they come from Herzog. He’s made some honestly great documentaries out there in the past and nine times out of ten, a question will hit and deliver the kind of powerful moment he probably intends for it to, but often times, he loses himself. He doesn’t always know when’s best to just keep quiet and let his subjects talk, as goofy as they may be.

But sometimes, that’s what makes people like these so interesting: They aren’t who you’d expect them to be and that’s alright.

Same goes for the world that’s way, way out there in the world.

Consensus: Beautiful and powerful to gaze at, Encounters at the End of the World shows off Herzog’s strength in capturing compelling images in real life, however, also shows us that he can’t always handle an interview perfectly and can often times get in the way of everything else that’s going on.

Photos Courtesy of: Indiewire, And So It Begins