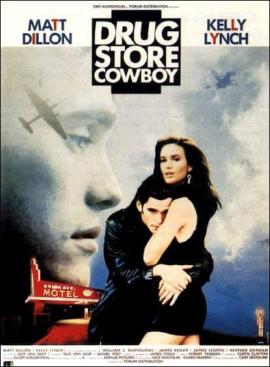 CVS, you better look out the next time I come through that front-door.

Bob (Matt Dillon), his wife Dianne (Kelly Lynch), Rich (James Le Gros) and Nadine (Heather Graham) are all a bunch of junkies who survive by robbing pharmacies in Portland, Oregon, in 1971. The natural leader of the gang, Bob, decides that it’s time to leave town after many, many scraps with the law and because of that, it brings about more and more problems with him, as well as with the rest of the group.

Writer/director Gus Van Sant has never really been a favorite of mine. Sometimes the guy does it for me (Good Will Hunting), sometimes he doesn’t (Paranoid Park), and other times, the performances are just so good that I don’t give a crap about his direction (My Own Private Idaho). This is one of those films that I’m sort of in the middle with – it’s not all that crazy or experimental, nor is it all that accessible, either. It’s somewhere between the two beasts we’ve come to know and expect from Van Sant and it’s why Drugstore Cowboy, as zany as it may get, is, at the very least, an interesting watch.

Not perfect, but hey, that’s fine, right? Life isn’t, so why should a movie be?

What’s perhaps so interesting about what Van Sant seems to be doing here is that he cobbles up together a mixture of all these different sub-genres and moods. There’s a heist movie, a crime movie, a romance, a anti-drug message, and also, a very dark drama that seems to have some dark comedic moments in there as well. Sounds like it could have been a total and absolute mess, which it sort of is, but it works; the movie is about a bunch of drug addicts who don’t ever seem to have their lives together, so why should a movie about their trials and tribulations be any different?

Van Sant does a smart job by getting in these character’s heads and mind-sets, while also never judging them for the decisions and actions that they choose to make throughout the whole movie, as questionable as they may be at points. But really, what Van Sant does show about these characters is just how sad and miserable their existences actually are, despite all of the fun and wild times that they may be having when they’re high off their rockers. Van Sant definitely enjoys sitting around and watching as these characters try to live their lives in normal ways, but he also can’t get past the fact that they’re realities are pretty screwed-up.

But at the same time, Van Sant doesn’t get too down in the dumps, as he actually shows that there’s maybe a little more to these characters and their lives, as well as their drug habits.

In a way, yes, Drugstore Cowboy is definitely an anti-drug flick in that it shows no matter how deep down in drug addiction you may be able to get, you can still get out of it, but don’t think that for one second, it won’t come back and bite you in your ass eventually. All of these characters either need their fix, or they just need to get away from the fuzz, but either way, they’re going through some very, fast-changing lives that get shaken up at just about every second and this film shows you that the lifestyle may be able to change. It’s not an easy change, though, and that’s where the harsh truth of drug-addiction and the message of Drugstore Cowboy comes into play.

It’s not happy, but it’s as real as you can possibly get.

These harsh truths also go all the way back to the characters because, for the most part, they’re all just about as unlikable and unsympathetic as you can get. But the actors in the roles are so good that it’s hard to get too upset about. Matt Dillon gives a wonderful performance as the main junkie, Bob, and it’s one of those performances where Dillon relishes in being a total a-hole, but also likes to show a bit of a human side to him. If there was anybody in this flick that I actually liked or even came close to giving my heart to, it was Dillon’s character just because the guy starts to show some humanity by the end and never really loses that edge to him that made him so cool in the first place.

His wife is played by Kelly Lynch, who is pretty good in this role, showing off her feminine beauty, as well as her own knack for making us think that we could fall in love with her as well. Maybe that doesn’t make sense but I guess it sounds pretty cool, which is what most of this film goes for as well. James Remar is also here totally chewing the scenery as the bored cop who seems like he has it all out for Bob and his junkie friends, but you soon start to realize that the guy cares more about him than you may suspect and it’s actually a nice touch. So often these kinds of movies like to get down on cops and law-enforcement for being a bunch of party-poopers who are such sticklers that they can’t help but lighten up a little and let people have their fun, but mostly, the reality is that these cops, aside from doing their job, just really want to make the world a better place and ensure that no more people succumb to the addiction that is drugs.

Sure, not all cops think that way, but there’s a solid majority that do and it helps put Drugstore Cowboy into perspective a whole lot more.

Consensus: Though Van Sant may stuck between his artistic side and actually telling a story, Drugstore Cowboy works for its unflinching, painful look at the world of drug-addiction, while also giving a heartfelt message that’s less corny than it sounds.