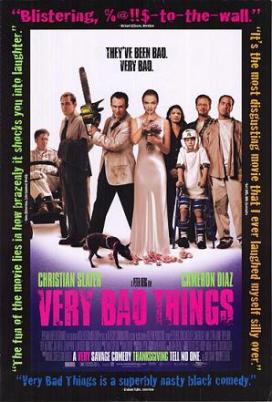 Bachelor parties. What’s the worst that could happen?

Kyle Fisher (Jon Favreau) is finally ready to settle down with his fiancee (Cameron Diaz). But before that all goes down, he’s got one weekend with his four pals, where they’re going to take a trip out to Vegas and celebrate his bachelor party the right way. While Kyle’s perfectly fine with a weekend chock full of booze, drugs and pay-per-view, he gets a little more than he bargained for when his best buddy, Boyd (Christian Slater), decides that it’s time to call up a stripper and let her do her thing. She does, but she also gets a little more than what was asked of her when the guys accidentally kill her. Having to tie-up all sorts of loose-ends, the guys all plan on covering it up and acting as if it never happened. However, when you have to tie-up one loose-end, there’s plenty more that need to be tied-up, especially when you have a bunch of yuppies dealing with all these sorts of issues.

Very Bad Things is the kind of movie that was meant to be despised and disgusted by when it first came out. It’s the kind of pitch black comedy that we hear so much about, yet, because more and more studios want to actually make money off of their movies, so rarely actually see. And with Very Bad Things, we get the kind of pitch black comedy that deals with all sorts of ugly and disgusting issues, like rape, like murder, like death, like crime, like incest, like drug-use, and like so many, many other problematic issues that so many movies are actually afraid to even take a whiff at.

And that’s sort of why this movie works as well as it does.

Peter Berg made his directorial debut with this and it’s actually quite surprising; while he’s become known as the go-to guy for true stories of heroic people, acting heroic, it all came from somewhere very dark and disturbing. That’s why, as sick and twisted as the movie may be, there’s still something interesting about why, of all people and of all the material out there in the universe, did Peter Berg decide to direct this? Was it because he needed to get his start and didn’t quite care? Or, was it because he actually liked the material and was basically against the idea of pleasing anyone with his first movie?

Whatever the reasoning behind his decision, it doesn’t matter because Berg does all that he can with this movie and, for the most part, makes it work. Because its grisly, upsetting and downright vile, Berg has to really make us feel as if we’re lowering ourselves down to this sort of heinous material, which he does, but he also allows us to have a little fun in it, too. Sure, a lot of people won’t like the idea that we’re supposed to be entertained, let alone, compelled by a premise involving a bunch of yuppies killing a stripper and trying to get away with it all, but there’s still some fun in watching that all play out here. After all, Berg makes the smart choice in not ever showing these guys in a positive light and is clearly against each and everyone of their ugly decisions.

But does that mean we have to hate the time spent with them?

Not really and it’s why, Very Bad Things, like a lot of other dark comedies in the same vein as it, feels like it’s enjoying itself enough to where we know that it’s in on the joke and is having fun, yet, at the same time, also isn’t afraid to pay attention to the darker, grittier details of a very dark and gritty tale such as this. There’s always a sense of joy in the air, for sure, but Berg isn’t afraid to show the kind of emotional-toll something like this can take on the people involved – especially when a bunch of the people are just your typical white, middle-class jagbags. Berg doesn’t make Very Bad Things all that serious, but there’s a hint of that to be found, which underlines all of the near-comical situations that arise, which makes it, at the very least, admirable.

Of course, it also helps that the cast is very good and clearly able to work with material as mean-spirited as this. Jon Favreau, despite not even getting top-billing, does a fine job as our lead protagonist, as well as his fiancee, as played by Cameron Diaz, who actually turns out to be the harshest, maybe even meanest character of the whole bunch. And as the friends that join in on the activities, David Stern, Jeremy Piven, and Leland Orser are all pretty great, but it’s really Christian Slater who gets to steal the show as the crazy and demented Boyd. While Mr. Robot has, no doubt, allowed for Slater to show off a more maniacal side to him, it’s really Boyd where he gets the perfect shot as displaying his range of crazy, hell-bent anger, without ever making it seem like he’s joking. Slater’s always best when he makes it seem like he’s absolutely losing his cool and here, as Boyd, he doesn’t shy away from it one bit.

Sure, Mr. Robot‘s a better watch, but hey, there’s no problem with getting a wild and nutty Christian Slater.

Consensus: Though its material is, at the very least, upsetting, Very Bad Things still has enough of a funny, comedic-edge to make it, on few occasions, hilarious, but also slightly serious, all things considered.