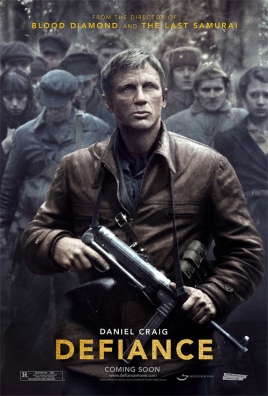 Who needs to bathe when you’re fighting for freedom?

In 1941, Nazi soldiers were all over Eastern Europe, going around and slaughtering whatever Jews they could find out in the open, or even in hiding. The numbers got so ridiculous that they reached the thousands and eventually, people began to get more and more petrified of the possible threat and were left heading for the hills, in hopes that they would find, at the very least, some sort of shelter. Three brothers, Tuvia (Daniel Craig), Zus (Liev Schreiber) and Asael (Jamie Bell), are able to do that and find refuge in the woods where they played as little children. But what turns out to be a small conquest for the three brothers, soon starts to get more and more people involved, with fellow Jews not just looking for refuge, but also to take part in killing Nazis and getting any sort of revenge that they can find. And for the three brothers, this is fine, however, they also start to collide with one another, when each one has a different point-of-view of how the camp should be run, what sort of rules should be put in-place, and whether or not any of this is even worth it.

Yet again, another Holocaust drama. However, Defiance may be a tad different in that it’s not necessarily a melodrama, Oscar-baity weeper – it’s much more of an action-thriller, with obvious dramatic bits thrown in for good measure. It’s something that director Edward Zwick has been known for doing for his whole career and it’s a huge surprise to see him handle material with so much potential and promise, and yet, not do much with it.

This isn’t to say that Defiance is a bad movie – it’s just a movie that could have been better, what with all of the different pedigrees it had going for it, but instead, got way too jumbled and confused about what it wanted to, or do, that it loses itself. While it wouldn’t have worked necessarily as a deep, dark and upsetting drama about the Holocaust and the horrible Nazis, it still somehow doesn’t work as a cold, deep and dark drama, with action-sequences of Jews facing off against Nazis. In a way, it’s two very “okay” movies, that still don’t find their ways of coming together in a smart, meaningful and coherent way.

Some of this definitely has to do with Zwick’s messy direction, but some of it also has to do with the fact that the script he’s working with, from himself and Clayton Frohman, just doesn’t always know what it wants to say.

For one, yes, it’s a Holocaust drama that cries out about the injustices and awfulness of the Holocaust in an effective, if slightly original manner; taking all of the focus away from the actual camps and ghettos themselves, and placing us in the woods, makes the movie feel all the more claustrophobic and tense. It also shows the desperation of those involved in that they were literally willing to risk five years of their lives, all alone in the shivering cold and unforgiving woods, just so that they weren’t found and executed by the Nazis. The movie doesn’t forget that most of these Jews have no clue about what’s really lurking beyond the woods and in that sense, it’s a smart, if somewhat effective thriller, bordering almost on horror.

But then, the movie takes in all of these other strands of plot that just don’t really work.

For instance, Jamie Bell’s character all of a sudden has a romance with Mia Wasikowska’s character that feels forced, as well as Daniel Craig’s romance with Alexa Davalos’. I would say that Liev Schreiber’s romance with a sorely underused Iben Hjejle is also random, but it’s hardly ever touched upon, until the very end and we see Schrieber smack her bottom, as if they’ve been canoodling for the past decade or so. Sure, putting romance in your movie assures that it will become more of a universal tale for anyone watching, but it also takes away from the believeability of the story and breaks up whatever tension there may have been.

And it’s a problem, too, because Zwick works well with actors and the ones he has here, really do put in some solid work – they’re just stuck with some lame material. Craig is your typical hero of the story, who always seems like he has his morals and heart in the right places, regardless of terrible the times around him may be; Bell tries whatever he can with a conventional role; Schrieber brings out some semblance of sympathy with a character who’s sole purpose is to be rough, gruff and violent; the ladies never quite get a chance to do more than just be dirty window-dressing; and Mark Feuerstien, despite seeming out-of-place as one of the Jews who takes refuge in the woods, fits in perfectly and is probably the most interesting character out of the bunch, despite not getting a whole lot to do.

Which is a shame, because the whole movie is basically like that. Everyone tries, but sadly, nothing in return.

Consensus: Even with the solid cast and director on-board, Defiance is stuck between two movies and never quite gets out of that funk, giving us a messy, imperfect look at the Holocaust, with an interesting viewpoint.