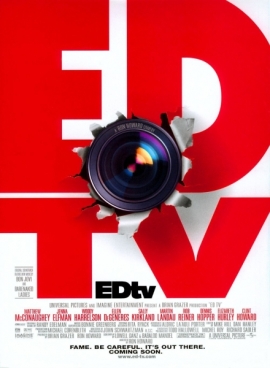 In the world of reality television, every network is constantly fighting one another over getting the highest ratings imaginable. It doesn’t matter if the programs they air are even entertaining, let alone, real – as long as people are tuning in and keeping the ratings healthy, then all is fine. That’s why, one network in danger of closing its doors for good decides that it’s time to focus a whole reality-show, on some random schmo, 24 hours a day, seven days a week. With that, they find  Ed Pekurny (Matthew McConaughey), a laid-back video-store clerk, who doesn’t really care about the show in the first place, but still thinks it’s a pretty neat idea, so he allows himself to be followed around by a camera-crew, capturing every moment of his life (except for, as he puts it, “bathroom stuff”). While the TV series makes Ed an overnight celebrity, it also begins to wreak havoc on his personal life, complicating his relationship with his new girlfriend, Shari (Jenna Elfman), and causing tension with his brother, Ray (Woody Harrelson). But it also gets him a possible new gilrfriend (Elizabeth Hurley), who may or may not have been hired by the studio for rating’s sake.

As is the case with almost every year, two movies who seem to have, virtually, the same plot, or ideas, get released in the same year. In the case of 1999, EDtv came out roughly nine months after the far more entertaining, intelligent Truman Show came out, and just so happened to be a movie about some person having their life filmed for the whole entire world to see. While the former is different from the later, in that it’s protagonist knows all about being filmed and is perfectly okay with it, it still doesn’t matter, because they are both quite different in many ways.

For one, Truman Show is a way better, more thoughtful movie, whereas EDtv is just, well, silly.

It’s not necessarily a bad thing, as the movie definitely prides itself in not taking its plot all too seriously, but it also keeps itself away from doing anything else. Even as a commentary on the modern-day state of television (which, even by today’s standards, not much has changed), EDtv seems to scratch the surface, but never really dig in deep enough to be such a scathing, mean-spirited satire, a la Network. The moments where it really does sink in to Hollywood, big-budget studios, and television as a whole, is through Ellene DeGeneras’ fun character, but she also seems like a type; she’s supposed to be the film’s villain, but is too comical to be believed.

And this isn’t saying that EDtv is a “bad” movie by any means – at times, it can be very enjoyable in a light-hearted, dad-has-off-of-work-day, but it also just never really does much of anything, either. Even in his lowest of lows, Ron Howard has always seemed like he was trying to do something interesting with his flicks, but here, he does seem spell-bound; he’s sort of going through the motions, allowing for there to be comedy and some fun, but never really doing much else to have the movie jump-off the screen.

In other words, EDtv is just plain. Not boring, but plain. Sometimes, that may be worse than actually being “bad”.

Which is weird because the ensemble cast does try. While Matthew McConaughey is a bit dull as a naturally good and likable everyday dude, he’s really just doing what the script calls on him to do: Be nice, be cool, be charming, and most importantly, just be yourself. Nowadays, McConaughey wouldn’t be found dead with this kind of material, but back in 1999, it was a whole different ball-game for him and having a chance to look at something like this, makes me happy to realize that he’s changed his ways, in some respects.

Jenna Elfman’s career definitely hasn’t turned out so well since the days of 1999, which is a huge shame, because she really is funny and clearly capable of handling dramatic-stuff, when push comes to shove. The only issue for her is that the movie roles just weren’t nearly as good as what she was doing on TV, audiences didn’t quite respond, and because of that, she’s left to star in shows with talking towels. Same goes for Elizabeth Hurley who, with the Royals, has bounced back quite well, but also seems to have the same issue in that she was charming, fun to watch, and most of all, beautiful-as-hell, but just never quite connected with audiences past Austin Powers.

And then, of course, there’s Woody Harrelson, who is great here as Ed’s brother, which is interesing to watch, mostly because of True Detective. There’s a real friendship to be seen here and while the movie doesn’t always give it the right time and light, the few moments of real camaraderie between Matt and Woody feel genuine and entertaining, as if we’re watching real-life buddies get the chance to pal around with one another. If anything, there’s a feeling that EDtv wishes it was like that, but sadly, it just doesn’t happen.

Consensus: Even with a timely theme, EDtv may have been less before its time, and more of just a plainly mediocre movie that never sets out to really tear the world of television a new one, but doesn’t do anything else of much worth, either.