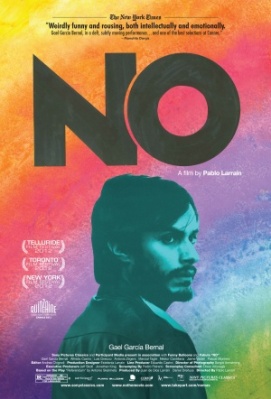 It’s 1988 in Chile, and for the past fifteen years or so, dictator Augusto Pinochet has been doing all sorts of things that you would expect some person with way too much power and control would be doing. And for those who don’t like his ways, well, somehow, they disappear and are never heard from again. But the rest of the world’s leaders aren’t happy about this and know that in order for there to be peace and solidarity between all nations, they pressure Pinochet to put the next election to a vote. Against his will, essentially, Pinochet agrees and puts the fate of the office in the hands of the people, once and for all. Those who want him to stay vote “YES,” those who want him to go vote “NO.” In the month leading up to the election, each side is given 15 minutes of airtime each night to promote their cause on television. Running the “NO” campaign is Rene Saavedra (Gael García Bernal), a young advertising executive, who knows how to win the election the right way. However, with very few resources and a lot of tension coming from the opposing side, Saavedra and his fellow campaign managers run into all sorts of problems that may take them away from winning the campaign.

Without sounding too obvious, I think it’s safe to say that a movie like No is pretty damn relevant to what the United States is going through at this very same exact moment. But that’s not to say that the movie is all that specific to just the 2016 Presidential elections, but more or less, every election, in any country ever. This idea about elections in and of themselves have become something of laughing-stocks over the years; everything is planned out perfectly, no candidate really means what they say, and when you get right down to it, all it is is a dick-measuring competition between two people who have more money than they know what to do with.

But No, in a smart way, changes that all up and reminds us why elections, or at least, the very idea of them, are so damn important to begin with.

Director Pablo Larrain does a lot of smart things here, but perhaps the smartest of them all is that he doesn’t lose sight of what matters most in between all of the crazy, sometimes over-the-top commercials, ads and whatnot, and that’s the human element of what was going through Chile at this point in time. No does tell us, at the very beginning, what is going on in Chile, but it doesn’t necessarily rely on a whole lot more than just that to inform us; simply, it uses the way in which these campaign managers all fight for their side to win, as passionately as they do, to drive home the idea even more.

It may not seem or sound like much, but it matters a whole lot. Larrain seems to be making a point about free speech, the idea of it, and why it matters so much in a society, regardless of if said society is run by a democracy or dictatorship, but never hitting us over the head with it. Because his story is about a political campaign, rising up against the more powerful forces that be, Larrain never gets preachy. He’s just telling a story, the way it deserves to be told.

And because of this, No can be quite a thrilling ride.

I’m not sure if Larrain meant for it to be perceived as that, but hey, it still works. There’s something incredibly interesting about watching and listening as a bunch of very smart, driven people, gather together in a room and figure out how to spin a certain story to make themselves look better, or create the most overly theatrical presentation and sweep the nation with their message and artistry. In a way, it’s a lot like watching the final season of the West Wing, but this time, barely anyone speaks English, is hardly pretentious about their work, and it’s a lot more condensed this time around.

At the same time, however, when No is all said and done, it still feels like a universal tale. Sure, this one in particular just so happens to be about Chile and how its citizens were constantly being held back by a brutal and rough dictatorship, but a good portion of the story can be centered towards other societies and populations as well. It’s not just about spinning a campaign the best way one can do, as much as it’s actually about achieving what you want to achieve and what you think is best for all those concerned. No deals with a lot of hot-button political issues, but it never forgets about the human aspect and knows that in order to make a society great, you have to have great people in it, who want to constantly make it better, and ensure that no more injustices are committed.

Isn’t that what everybody wants though?

Consensus: Smart, interesting and most of all, compelling, No tells a fact-based tale without hitting too hard on the heavy, important issues it’s trying to tell, as much as it just reiterates the fact that political campaigns, when done right, can change lives for the better.