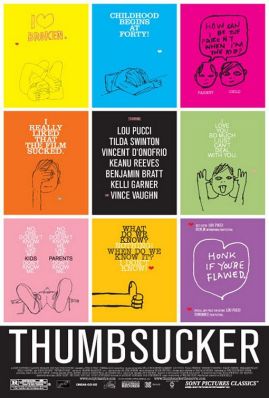 Sucking thumbs are bad, but what about binkies?

Justin (Lou Taylor Pucci) is going through the usual growing pains that many teens his age have gone through before him and will continue to do so after him. The only small difference is that whereas most teens get by on focusing on themselves and trying harder to get better, Justin does so by sucking his thumb. It’s an odd habit he has, that eventually, his parents get him on some medicine, in hopes that he’ll not just kick the thumb sucking, but also become more focused in school. Thankfully for them, what they wanted does happen; eventually, Justin stops sucking his thumb, starts up a relationship with a girl (Kelli Garner), gets better at school, and starts winning all sorts of championships with his debate team. But eventually, all of the medicine begins to pick-up with Justin and it isn’t before long that he starts to spiral out of control, hurt those that he loves, and realize that he needs to grow up a lot sooner, but on his own and without any medicine to help him out.

Does Thumbsucker sound like some sort of metaphor for coming-of-age, growing up and realizing that you’re not a little baby anymore? Pretty much, yeah. Writer/director Mike Mills crafts what is, essentially, the 500th quirky, indie coming-of-age flick from the mid-aughts and while this one’s a little different in terms of its style, unfortunately, the story is pretty much still the same.

But sometimes, some of the same is fine. With Thumbsucker, there’s a feeling of familiarity here, but not just with the material itself – Mills does something neat in that he does paint Justin’s issues with growing up and accepting the world around him, as almost a universal thing that all kids at that age go through. Some can handle it quite well and get by with flying colors, whereas others, like Justin, have a rough time with it, suck their thumbs, and need a daily dose of whatever medicine they’re prescribed to get by and through another day. In a way, I make Thumbsucker sound like a melodramatic piece of Lifetime-trash, but it’s a little smarter than that.

For any of those who have seen Beginners or the recent 20th Century Women, they’ll know that Mills has a knack for telling a story in his own way, visually. Sometimes, this can get in the way of the material, but here, it does help it out, especially since a lot of what the movie seems to be talking about and covering, is a little dry. It’s a conventional tale that without Mills’ constant bits and pieces of art thrown in there for good measure, would have just been another run-of-the-mill coming-of-ager, but of course, it’s got that going for it.

Where Mills seems to lose himself a tad bit is in the story department, and not really knowing how to compact everything and everyone so perfectly well. For instance, Justin’s story is the clear focal point of the whole movie, but then, Mills also veers his head towards Justin’s parents, played by Tilda Swinton and Vincent D’nofrio, and then to Keanu Reeves’ hippie-dentist character, and eventually a little to Garner’s Rebecca character. Vince Vaughn’s teacher does get a moment here and there, but not his own subplot.

For a movie that barely even hits 90 minutes, it’s surprising how jam-packed this can be with story and that ends up becoming its own worst enemy. While Justin’s story is more than enough to maintain the whole flick, all of these other stories, like with the parents and their battle with aging, fidelity and staying happy, while are admirable, still don’t matter much. It’s as if we got the story of Justin, only to get to the parents themselves, only for the movie to realize that we have to hear about Justin a lot, too. It’s a constant back-and-forth that just didn’t quite work for me and made it seem like Mills himself was figuring out exactly where to go with it all, too.

Then again, the ensemble he’s put together is something else, so that helps, too.

Though we don’t get to see too much of him nowadays, Lou Taylor Pucci was quite the young talent and proves it with Justin. Here, Pucci has to act really angsty and smart, which could have definitely been annoying, but because Pucci plays this Justin character as a bit of a wild and loose cannon, it actually works to his benefit. It’s actually fun to watch him interact with those around him, as opposed to sad or boring. Kelli Garner plays the eventual apple of his eye and they have a nice bit of chemistry together, which would make sense considering they were going out around the same time, too, but that’s neither here nor there.

On the supporting side, Vince Vaughn does a nice job dialing down his persona, yet, still staying funny and heartfelt. If anything, all of Vaughn’s various attempts at playing it straight don’t quite come off as good as it does here and should be the calling-card he uses for future reference. Keanu Reeves, while still totally playing in his element as a bro-ish kind of dude, is fun to watch. And as the parents, D’onofrio and Swinton are good, too, even if their story could have probably had its own movie. Benjamin Bratt is around for a scene or two, makes us laugh and most of all, makes us wish he was around more.

Don’t think I’ve ever said that before, but hey, it’s the truth.

Consensus: While a tad too quirky and overstuffed for its own good, Thumbsucker is still a familiar, but also heartwarming coming-of-ager, assisted by a very good ensemble.