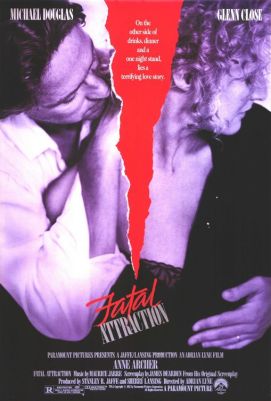 Stay married and happy, men. You never know what’s out there.

Dan Gallagher (Michael Douglas) is a successful business man who has a nice job, lovely wife (Anne Archer), cute kid, and quaint little house in the suburbs. However, that all starts to change once he gets involved with Alex (Glenn Close), another successful business woman who falls head over heels for the guy. And for awhile, he thinks the same. Until he doesn’t and that’s when it all gets a little crazy.

Fatal Attraction calls for the kind of crazy and wacky treatment that director Adrian Lyne so deservedly gives it. It’s clear he’s having a lot of fun, knows that this material can sometimes be so ridiculous, but also does approach it with a certain bit of seriousness, as well, not forgetting that at the heart of this story, real issues and problems are being addressed. For one, it’s not a horror movie – or at least, not in the expected sense.

While Lyne loves playing around with those certain conventions, as if we were watching a horror movie, instead, what we’re watching a real life horror flick, with real life people, making real, incredibly terrible choices. It’s the kind of movie that studios prefer to stay away from, but Lyne does a solid job of reminding us that, at some points, this material can be pretty crazy, but when you get right down to it, isn’t much of a laughing-matter, either. Sure, it helps that he films each and every of the sex scenes with a foggy bit of eyes, but it also helps that he doesn’t forget what’s really going on underneath all of the hot, sweaty, steamy and naked sex.

Or, at least I assumed they’d be naked, right?

But by the same token, it’s sort of hard to really care for Michael Douglas at all here. Just to clarify some things so that we’re all on the same page: The guy is human, the guy is married, and he wants to have a little bit of playtime when his wife is away. Makes sense. But then, when his wife comes back and he’s back in the swing of things, we’re supposed to act like that never happened and even worse, we’re supposed to actually care about him and all of the stuff that he goes through when he just decides to throw this girl away like garbage? It’s hard to care what really happens to this guy, because as much as he may want to forgive and forget, it’s hard for us to do the same.

But maybe that’s the point? I don’t know.

Douglas is good here because he doesn’t ham the role up in the slightest, but it also makes him feel a tad bit more dull than he probably should. Anne Archer plays his wife and she’s got a few nice moments, to show not why she would love someone like him, but why he’d be making such a bad decision in the first place. It’s not a very showy role, but it’s a nice one that reminds us what she can do.

But really, it’s Glenn Close who, as you may have heard by now, absolutely steals the show as Alex Forrest, or basically, every married-man’s worst nightmare. Close is so amazing here as Forrest not only because she can play normal and switch it off into full-on crazy mode so well, but because there’s just something about her that you sympathize with from the very start, regardless of how sadistic or creepy she gets. A good portion of this credit goes to Lyne for not painting her as a total villain, but as a sad, lonely and rather kooky lady woman who had a brief spat with love and affection, couldn’t get enough of it, and then, all of a sudden, had to put up with the fact that it was going to be gone from her life, just like that.

Now, who’s the one we sympathize with more, I ask? Regardless, Close is great in this role, never letting us forget that she lingers in every scene – even those that she’s not in – and also has us questioning what her next move or motive’s going to be. After all, the movie never makes it totally clear just what she’s up to, or why she is the way she is, making her dangerous, scary and yes, so very, very compelling. In a way, she makes Fatal Attraction a better movie by just owning the screen every chance she gets, but yeah.

Consensus: Fatal Attraction runs into the usual problems that come with a wild plot like this, but due to an amazing performance from Close and a smart, relatively sensitive direction from Lyne, it works better than it should.

Photos Courtesy of: Old Films and Me