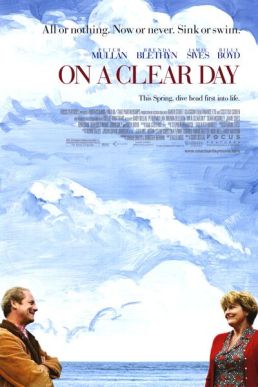 Swim upstream. Or down. Depending on your mood.

After losing his job at a Glasgow shipyard that he’s been working at for quite some time, 50-year-old Frank (Peter Mullan) doesn’t really have much going on in his life. While his wife (Brenda Blethyn) is practicing to become a bus-driver and become the soul bread-maker of the family, Frank is looking anywhere he can for a job, that doesn’t just pay, but also get him out of this funk that he’s been in ever since a tragedy hit him and his family many, many years ago. That’s why, even though a casual remark is made by a buddy of his, Frank gets an idea: to swim the English Channel. While it’s rather outlandish and silly, Frank is determined enough to make the dream a reality and with the help of his closest friends and of course, his loving and supportive family, Frank sets forth on a training regimen that will help him achieve his goal. But that goal is a lot harder to achieve when you already have so much baggage on land, in the first place.

On a Clear Day is such a cute, little adorable movie that it’s hard to really point out any faults about it. Of course, there are quite a few, but at the end of the picture, do any of them really matter? Because while the movie isn’t as deep as it wants to be, nor is it ever really as smart, either, On a Clear Day, when all is said and done, is charming, nice, and rather enjoyable. It’s the kind of movie that’s safe, inoffensive, and essentially, perfect for the whole family, in the same ways that Disney movies are, but instead of talking cartoons, it’s actual, real life human beings.

And instead of singing, everyone’s just yelling in heavy Scottish accents.

But there’s not much of a problem with a heavy accent – in fact, half of the charm of On a Clear Day is from where it takes place and the overall setting. It’s a calm, easy and rather lovely little place where everyone knows each other and is able to lend a helping hand. However, on the other side, it’s also a dark, sometimes muggy town that sees people losing jobs, day in and day out, and more immigration to the big cities, than ever.

So is it really all that happy and lovely? Not really, but that’s one of the many aspects On a Clear Day hints at with itself. It never gets as deep, or as dark, or as depressing as it wants to, which is sometimes okay, but other times, it does feel like it’s keeping itself away from being better and much more thought-provoking. Does that make it a bad movie? Not really, but it makes it one that had plenty of promise to go to some deep, heavy places, but instead, chose the safe way out.

Sometimes, there’s no problem with that. At least most would be pleased.

But then again, it’s hard to be mad at a movie like On a Clear Day when the cast assembled are so wonderful and fun to watch, that at the end of it all, it’s almost like, “Aw, who cares?”. Peter Mullan has been one of the more dependable acts in film today and honestly, it’s no shock; he can play down-and-dirty when he wants, but he can also brighten things up and play charming. Here, he gets to do a little bit of both, although, without ever showing one side too much and it’s actually quite nice. He makes us feel and understand the sadness that exists within Frank’s life, while also showing some glimmers of hope throughout. It’s a slight performance on his radar, for sure, but it’s also a sign that the man knows what he’s doing.

Brenda Blethyn is quite charming, as usual, in the role as his wife. Unfortunately, we don’t get to see a whole lot more of her, other than trying to talk to Frank and, on occasion, getting into arguments with him about his life and their history together. A much smarter movie probably would have focused on how both of their lives are affected, but eh, so be it. Blethyn still gets a couple of opportunities to show why she’s great in these smart, yet very strong women roles and it goes without saying that I wish there was more of her now.

Maybe some day. On a clear day, perhaps?

Consensus: While slight, small and relatively safe, On a Clear Day is also quite a lovely movie that doesn’t go as deep as it should, but does have a charming cast to make up for its issues.