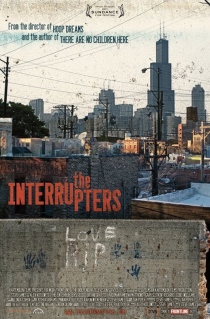 See? Not everybody has to kill each other.

In most cities throughout the country, there’s a great deal of violence that’s hard to turn away from. It’s tearing apart families, destroying societies, and most of all, killing many, many people who don’t deserve any bit of violence done towards them (not that anyone deserves to die, or be hurt in the first place, but you get my drift). This is when CeaseFire came together in hopes of doing one thing and one thing only: Interrupting violence. Made up entirely of ex-gang members who’ve done their time and seen the error of their ways, CeaseFire’s mission is to put an end to the violence epidemic among the youth of one of the harshest, meanest cities in the whole country, Chicago, by mediating conflicts before they escalate into murders. And while some people want to learn how to better themselves, as well as their own community, others don’t think that they can. After all, some feel as if they are too far along in life to turn back time and become peaceful, carefree members of society.

How wrong they are.

The Interrupters could have easily been the preachiest, most nauseating documentary ever made. It’s about how violence can be stopped through simple, small and kind actions, as well as action can be made, just not in the violent sense, to ensure that everyone walks away from a situation better and happier about their lives. It has the look and hell, even the feel of this kind of documentary that’s not necessarily hitting any sort of new nail on the head, but instead, just hammering away at one obvious point, again and again, until our minds are numb to it all and we just accept that this is how the world works, when in reality, it doesn’t.

And yes, the Interrupters can be a hard movie to get used to, especially whatever your preconceived notions about inner-cities, violence, and gangs, and all that jazz are. Even I myself went in with a little trepidation, having lived in Philly for quite some time, knowing what works, what doesn’t, and what’s all a hoax for middle-class white people, such as myself, to feel better about themselves.

But even I was shocked by how much the Interrupters, both the documentary, as well as the group themselves, work.

In fact, it’s unlike anything I’ve ever seen before; in a time where violence seems to be happening every second in the world and is broadcast everywhere the next, it’s rather sweet and reassuring to see that there are people out there trying to stop this violence, once and for all, by any means. But what’s even more shocking is to see how it all plays out and, well, works – the movie is much more about the wins and success of the group, rather than the losses and defeats, however, both sides of the equation are shown here. The Interrupters shows us a group who’s mind-set it is to stop violence from occurring by calming people down and talking everything out, which sounds all hokey and stupid, until you actually see it work and somehow, all the cynicism goes away.

It’s as if, yes, the world can be changed through some heartfelt, meaningful conversations.

But the Interrupters is honestly more than just about this group, all the good that they’re doing, and what they can do for communities, but about the strength of the human condition in the first place. The fact that the group is run by ex-cons, who not just go out of their way to save people’s lives, but also put their owns on the line, is honestly surprising, but the fact that they all seem to know what they’re talking about and are 100% dedicated to making this group and its efforts work, is all the more shocking. It’s as if these people were tossed to the side as soon as they got out of jail, but rather than getting down in the dumps, they decided to make a difference and change people’s lives, the way they probably wish theirs would have.

It’s hard to go into specific examples, except to just know this: Everyone here is a flawed, but lovable human being. They try to make the world a better place and because of that, it’s hard to ever have issues with the things that they’ve done, said, or witnessed in the past. They’re past it now and are in desperate need to save people’s lives. If that doesn’t earn them at least some small bit of forgiveness, then I don’t know what does. Just stop the violence, people.

Consensus: Even at the center of the Interrupters, lies a hokey message about how we can all get along, but through the stories we hear and see play-out in front of our own eyes, it can’t help but feel honest, raw, and reassuring that all life is beautiful, no matter what kind.