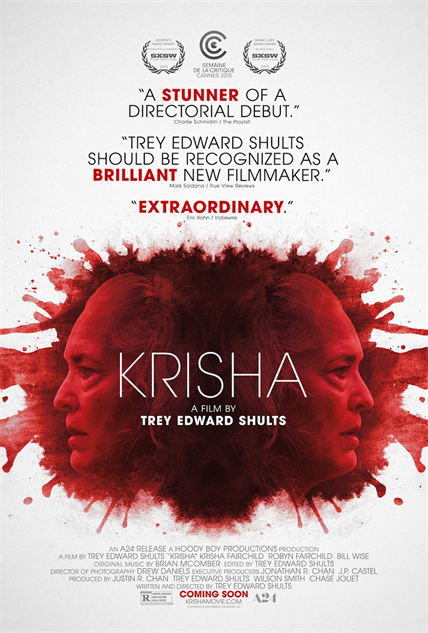 Jesus. Just stay home and have a nice TV dinner.

Thanksgiving is a time not just made for celebration, but good times, relaxation, and also getting to spend time with your loved ones. And in some ways, it’s even better to do that with family who you haven’t seen in quite some time – not to just let them know how you’re doing, but also what they’re up to and trying to figure out how to ensure that a constant dialogue is kept from there on out. However, for Krisha (Krisha Fairchild), Thanksgiving is going to be a bit of a ride, what with practically her whole family, not really liking her. See, Krisha’s got a bit of a drug-problem that has, unfortunately, turned her into a bit of a nut-ball, pushing members of her family further and further away. But most importantly, it’s the friendship with her estranged son (Trey Edward Shults) that she longs for the most and, honestly, she may not get her way. How she reacts to it will either make, or totally break the holiday spirit.

The neat idea about Krisha is that it’s basically like every other movie concerning a holiday dinner, in which long, lost family-members get back together, reunite, drink, eat, yuck about, and eventually, get into sparring bouts over silly stuff that doesn’t really matter, but this time, with much more style. See, writer/director Trey Edward Shults pulls-off this neat idea where Krisha, the movie, is basically a horror movie, without any monsters, ghouls, or well, anything scary all that happening. It’s building up tension in the everyday normality of life, that it almost seems obvious, deliberate and a bit showy, but it’s also quite fun to watch – not just because it can be awfully relatable, but Shults may be something with his style.

Then again, maybe he’s not.

In fact, there’s a good portion that Krisha was just such an easy idea to shoot and make a full-length feature-flick out of, without having to spend a whole lot of money with, that it probably was done for that reason. There’s no real point made about families, the spirit of Thanksgiving, or even alcoholism; basically, we’re just watching a family-reunion and dinner that was essentially doomed from the start. Sounds conventional for sure, but what Shults does with the material is interesting, in the small, subtle, yet effective ways that he constantly frames it all like a never-ending horror-chiller, where everything is about to go all up in flames, a train is about to crash, and the world is going to end, and well, all we can do is sit back and watch.

Anyway, Shults gets a lot of mileage out of his cast here, most of whom are actually just his own family in the first place. Hell, even Shults himself shows up in the movie and gives probably the worst performance of the whole ensemble, which makes you wonder if he just needed someone to fill that role and couldn’t get anyone at the last minute, or is he going to be a softcore version of Tarantino, casting himself in these bit roles in his great movies, making him seem more and more like an egomaniac? I don’t know and well, it doesn’t totally matter, because behind the camera, he does a solid job; he keeps it moving, somewhat exciting, and pretty tense, even when it feels like literally nothing is going to happen.

But of course, a great deal of that praise deserves to go towards Shult’s real-life aunt, Krisha Fairchild, who I haven’t seen before and it’s a damn shame. It’s actually interesting that Shults seems to cast his whole family here, because even with the exception of him, they can mostly all act – Krisha is probably the most perfect and obvious example of that because while she’s playing a pretty loud, big and showy role at times, she still knows how to dial it down a smidge to where we do see a human being underneath all of the craziness. In a way, Fairchild reminds me a lot of Gena Rowlands here, in that she can be so over-the-top and unpredictable, you can’t keep your eyes off of her, but you also know that there’s some bridge of humanity, that it makes her even more watchable.

In this case, then yeah, casting your family is a smart idea. Just don’t turn into the Smith’s over there, Shults.

Consensus: While a bit showy and pretentious, even despite its awfully simple premise, Krisha still works by taking a different approach to familiar material, and also allowing for its lead to run rings.