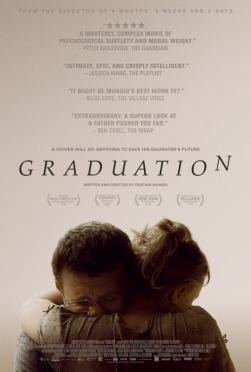 As if school wasn’t rough enough. Thanks, Dad!

With his daughter’s high school graduation coming up, Romeo (Adrian Titieni) couldn’t be more than excited for both himself, as well as her. For him, it’s a sign that all of the years of hard-work and ensuring that his daughter got the education and treatment she deserved, have finally paid off, and for Eliza (Maria Dragus), it’s a sign that it’s time to grow up and move along with life. After all, her father has her locked, loaded and ready to ship out to a fancy school in England where, if she gets passing-grades on her finals, she’ll be spending the next few years of her life and, hopefully, out of a rugged, gritty, and dirty place like where they’re living in in Romania. But of course, it all begins to fall apart when, on the way to school one day, Eliza is attacked by a random person and possibly even raped. Now, with the finals coming up swiftly, Romeo uses every advantage in his power to make sure that his daughter not only takes the final exam, but passes and can move away, as soon as possible. But with everything going on in his life, added on with plenty more now, it seems like Romeo’s dreams may not at all come true.

Graduation is the kind of movie where it seems like nothing is happening, but if you really look deep in and hard enough, chances are, you’ll realize that almost everything is happening. It’s a story about one girl’s graduation and a father’s acceptance of her growing up and moving away, of course, but it’s also about so much more; it’s also about one man, at odds with the world around him, trying to make sense of an ugly place that, in all honesty, he partakes in. After all, we get to know more and more about this daughter, the father, and hell, even the mother, so much to the point where we realize that it’s more than just a slice-of-life tale, but a dark, understated look at these relationships and how they’ve constantly been getting worse and worse as the years have gone by.

You know, like is the case with all families, hate to say it.

But writer/director Cristian Mungiu is a much smarter film-maker than to just let this all be known to us, right off the bat. Nope. Instead, Mungiu takes his time, letting us know small, certain details about these characters, their lives, their histories, and well, where they want to go next. He’s a smart enough film-maker to know that it’s best to let everything breathe all by itself, which is why Graduation, at a little over two hours, and feeling every bit of it, can tend to be a bit straining; there’s so many subplots, with so many different meanings and threads, that after awhile, it makes you wonder what the real story actually is.

But he puts it all back together in a solid little character-study that has more to do with the father in this situation, than the actual daughter. Even though her characterization goes far and beyond being just another spoiled, little brat who doesn’t know or understand the world around her, just yet, it’s really the father who gets the most shadings, in which we see a truly detested and hated human being who, by the same token, also happens to be a very good father. If anything, he just wants what’s best for his daughter and in by doing so, takes some pretty chaotic, downright idiotic steps, but it all comes from a soft, sweet spot in his heart.

Sure, it may be problematic, but hey, it’s what dads do best.

And as the father, Adrian Titeni is quite great, showing us sides to this character that we never thought we’d see. Cause once we first meet him and see him as just another average, ordinary, everyday father who loves his wife, his daughter, and, at times, his job, we don’t really think that there’s much to know. But as the film goes on and the plot thickens, we see that there’s a truly messed-up and sad individual somewhere underneath and it’s hard to keep your eyes off of him. He may not look like a bastard, but he totally is, but he’s the kind who’s troubled and interesting enough that he’s compelling to watch and Titeni, through every chance he gets, allows this character’s depravity to sink further and further into troubling.

Sort of like, you guessed it, real dads. What they do for us is both a blessing, as well as a curse. It’s belated, but hey, Happy Father’s Day, dads.

Consensus: Even if it is a bit long and slow, Graduation still offers up a nice character-study on a few who are interesting, if also well-acted.

Photos Courtesy of: The Hollywood Reporter, BFI, The Playlist