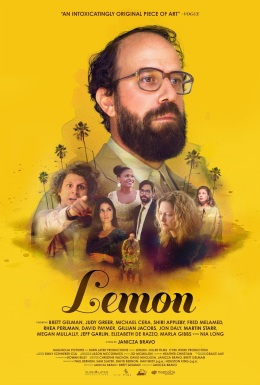 So, wait. What does the fruit have to do with it all?

Isaac (Brett Gellman) is an actor just trying to make it big. However, he finds out that each and every role isn’t quite for him. The only thing in life he has to rely on is his girlfriend Ramona (Judy Greer), who also happens to be blind. But then, she walks out on him, sending his life into a free fall. Now, he does his best to direct a staging of Chekhov’s “The Seagull,” while also trying to stay close with his family and also maybe even attempt a new love in his life.

In the world of comedy, there’s this general idea that there are no rules. The only rule there is, like at all, is that your comedy has to be funny. If not, you’ve failed already. Meaning, you can be offensive, you can be mean, you can be off-putting, hell, you can even be in the most poor taste imaginable – as long as you’re funny, then all is fine and right with the world.

But after watching something like Lemon, I sort of feel like there needs to be a few more rules added on to that very small list.

Lemon is so clearly straining itself to be weird, odd, and random that it’s not just obvious, it’s downright annoying. It’s the kind of movie that, like last year’s the Greasy Strangler, is so wrapped-up in its strange little world, that it’s actually interesting to see where it navigates through and where it goes; except in this case, Lemon isn’t all that interesting. It wants to be and definitely thinks it is, but it isn’t.

If anything, it’s just another case of an odd indie-comedy that’ way too bizarre for its own good and never really makes sense of itself in the meantime. It’s like Tim and Eric-level comedy, but instead of actually being so twisted, it doesn’t matter if any of it makes any sense, it’s just so weird and twisted, that who really cares. I almost want to say the word “dull”, but it’s too strange for that.

There’s at least ten minutes or so of this hour-and-20-minute-movie that has, at the very least, some laughable comedy, but it’s not really due to the script, or what jokes are being set-up. It’s mostly due to the fact that there are the likes of Martin Starr, David Paymer, Fred Melamed, Shiri Appleby, and Rhea Pearlman, all singing a nutty song about Motzaballs. Without any of them, the scene just wouldn’t have worked, but because they’re all such respected talents in their own rights, getting stuck working with silly material like this, it’s actually chuckle-worthy.

Oh, and that’s another thing about Lemon – its cast is quite stacked. Clearly everyone is here either as favors to Gellman, or just because they had a chance to let loose for a bit, but even some of them feel a bit wasted. Judy Greer plays a blind woman who is basically just used as a one-joke punchline the whole time; Nia Long plays a possible love-interest here who, despite seeming she like she’s in on the joke, doesn’t really have much else to bring here; Michael Cera plays a self-serious actor and isn’t funny; Gillian Jacobs has like two or three scenes with Cera and yeah, isn’t given much to do; and yeah, I’m sure there’s more.

Basically, everyone here feels like their wasted. Even Gellman himself who, no matter what he seems to show up in, is awfully fun to watch. Here, because he’s playing such an odd character, doesn’t actually get the chance to really be the usual compelling we see from him and know him especially for, whenever he decides to rear his bearded-face into something. He channels something different that we haven’t seen from him before, but in a way, it’s hard to not wish for him to go back to the old ways.

Consensus: Odd and crazy, yet, with nothing really funny, Lemon tries very hard to make people laugh and squirm, and stretches itself way too thin it trying to do so.