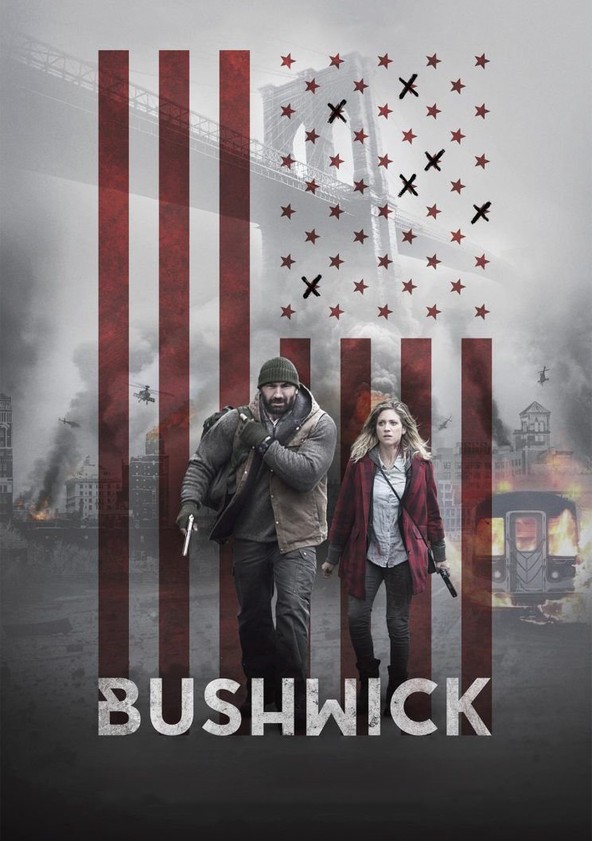 It’s the end of the world as we know it and as long as Bautista’s there, I feel fine.

It’s just another typical day in NYC and Lucy (Brittany Snow) and her boyfriend (Christian Navarro) decide to spend their time together, heading off to see Lucy’s sister and grand-mom. Nothing too crazy or out of the ordinary, but typical. Then they step off the subway, and for some reason, hell has broken loose. Guns, weapons, bullets, and bodies are flying everywhere on the streets of Brooklyn’s Bushwick neighborhood. Why? Well apparently, Texas is attempting to secede from the Union, and militia forces have descended upon New York City to claim it as an East Coast base of operations and negotiation tool. Now it’s up to Lucy to survive the day, which isn’t all that easy when you’re a small, relatively civil white girl from Brooklyn who is constantly falling prey to evil people, on both sides. However, her only sense of safety and perseverance is Stupe (Dave Bautista), a burly war veteran who has seen horrors like this before and knows what he’s getting himself into, but at the same time, isn’t too happy about it.

The whole gimmick behind Bushwick is that it’s not just all taking place in real-time, but it’s supposed to be shot in one, continuous-sequence, a la Birdman or, from what I hear, Woody Harrelson’s Lost in London. Which already proves to be a problem for the movie; we can tell when the cuts and swipes occur, but the movie’s also not very subtle about breaking its own rules, either. Both co-directors Cary Murnion and Jonathan Milott earn some praise for at least attempting something rather difficult and time-consuming, but at the end of it all, it can tend to be a bit distracting.

Still though, it kind of works.

See, Bushwick puts us right in all of the action, which helps the movie move from scene-to-scene, even if a lot of it can seem repetitive. It’s the kind of movie that doesn’t really ask for us to think of things like logic, or even expectations, but sit back, watch, and continue to be all wrapped-up in all that’s happening. A lot of the action takes place off-screen, far away from our eyes, but heavy in our minds and the imaginations can honestly run more wild than what’s actually seen. It’s something so rarely done in modern-day thrillers, that it’s nice to see it here, even if it was probably unintentional.

And sure, the movie’s a little silly. When the action slows down and the intensity sort of dissipates, the characters aren’t all that smart. And this is where the one-shot gimmick runs afoul – we can always tell when these actors are acting, no matter what. They’re made to seem like real people, in a disastrous situation, without anywhere to go, or any shelter to hide in, but really, because we don’t get the hundred or so edits to get that right shot/take, we’re watching what is, essentially, actors running lines as if they’re petrified and all shaken up.

The only one who really gets by with all of this is Dave Bautista because, well, he’s such a menacing force, he doesn’t have to act scared or worried. He actually downplays the role much more than you’d expect, and it’s much more interesting than you’d want from a movie about a five-block trek through a war-zone. Even in the smaller moments where the movie decides to take its time to develop characters, as dumb as they may be, Bautista shines and shows us that there’s more behind the big arms and body.

Believe it or not, the fella can actually act. Wow.

And nothing against Brittany Snow, or any of the few others here, but yeah, they don’t quite work. The movie much more about the mood and the tension in the air, as opposed to being a smart, thought-provoking allegory for the current state of affairs in America. While something such as this is perfectly relevant in the same way that the Handmaiden’s Tale sort of is, Bushwick doesn’t care too much about really developing these ideas any further than just using them as a, you know, backboard for showing some real cool action and using a neat style.

Does it totally work? Eh. Not totally. But hey, it’s better than anything else I’ve seen in the past week, so why not be nice.

Consensus: Despite its odd gimmick and silly writing, Bushwick is still a rather tense and exciting thriller, that has some stakes in the real world, but never goes beyond much of any of that.