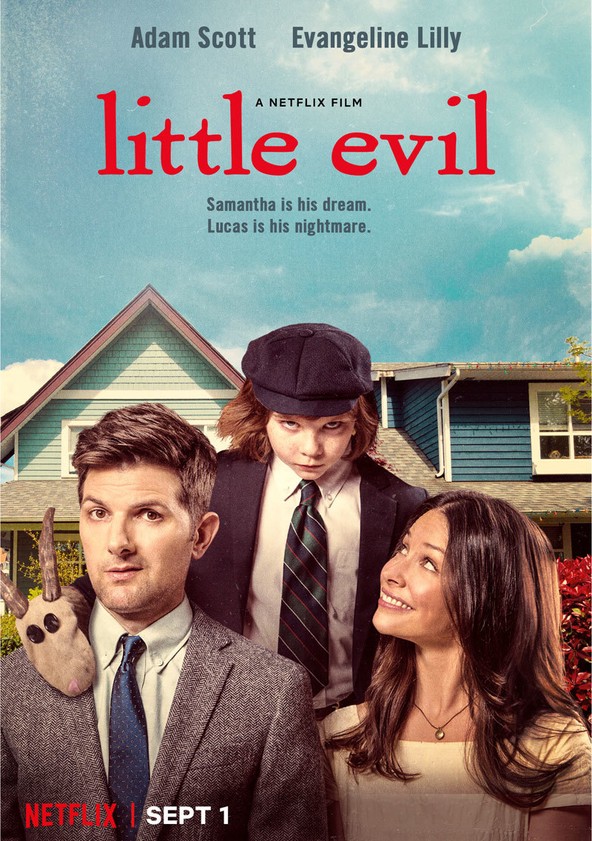 Every dad gets static from their kids. Especially the ones that aren’t even their DNA.

Gary (Adam Scott) is doing the best that he can as step-dad to Lucas (Owen Atlas), but as most step-dads know, it’s not all that easy. For one, he loves Lucas’ mother (Evangeline Lilly), but also knows how hard it is to compete with the father of Lucas, whoever the hell he may be. Also though, Lucas may be, what we call, “evil”. In fact, literally so. It gets quite scary for Gary, who does whatever he can to connect to the kid and become something of a father-figure, but for some reason, it just doesn’t seem to work – there’s something about Lucas that is weird and dangerous. It’s something that Gary, along with a fellow league of bewildered step-dads investigate just to find out what’s really going on Lucas’ head and whether or not he can be saved/helped. But when someone’s possibly the descendant of the Antichrist, it’s very hard to save them.

A few years ago, writer/director Eli Craig made a snappy, funny, and intelligent little horror-comedy called Tucker and Dale v. Evil. It’s hard to say what was so genius about it, other than that it turned the horror-genre on its ears and used a one-joke premise to its fullest extreme. Just when you thought the movie was done making jokes at its own expense and was going to run out of stuff to do, say, or even work with, guess what? It went that extra mile. But it was also funny, too, and not in that kind of smarmy, look-at-me kind of way – it was a genuinely funny and interesting horror-comedy that kind of had something to say, but better yet, had something to do.

Which is why Little Evil still kind of works, but seven years later, also can’t help but feel like a bit of disappointment.

It’s still a funny movie, though. Like Tucker and Dale, it’s very much a one-note premise that constantly reinvents itself in goofy, even wackier ways that honestly didn’t even seem imaginable. Craig seems to be parodying the Omen, and other “demon-child” movies, but also seems to be having a good time exploring the facts of life when it comes to being a step-father.

Which is to say that the movie has a heart and something on its mind, although, by the same token, doesn’t go as far as it possibly wants to, or even should. It’s literally under 90 minutes, and because of that, it can’t help but feel a little too quick, a little too swift, and most of all, a little too rushed. It’s still funny, with the jokes both making fun of the premise, as well as benefiting from, working, but there’s still something there just not fully connecting. Don’t know what it is, but yeah, you can sort of feel it.

But then again, the ensemble is so much fun to watch and be around that, at the end of the day, does it even matter?

Adam Scott, as usual, plays a perfect every-man as Gary, the stepdad who tries so desperately to be loved and respected by his stepson, yet, just can’t seem to catch a break. There’s some heartbreak to be had there with what I just said, but the movie doesn’t bother to go as deep as it probably wants to – Scott does, though, and it’s why, the performance comes off any better than it probably should have. He’s funny and knows when to tell the best joke, but there’s something deeper and darker there that makes the movie a bit more interesting, rather than just being a barrel of silly jokes about demons and children.

As his wife, Evangeline Lilly is charming and as cute-as-a-button, as usual, whereas Owen Atlas, when he’s not being terribly scary, also has some nice little moments as Lucas. The real stand-out, however, is Bridget Everett as Al, another stepdad that’s along with Gary for this wild ride. Yes, it is a joke: Having Everett play, basically, a man, but it’s a joke that works, time and time again. She’s easily the one having the best and most fun, constantly cracking jokes and seeming like the life of whatever party is being held. It’s nice to see Everett get a chance to be funny, as usual, but also have it pay-off in a movie that’s so deserving of her.

You know. Unlike Fun Mom Dinner.

Consensus: While a small step-down from his debut, Craig’s Little Evil is still a funny and relatively enjoyable piece of horror-comedy that doesn’t quite have the stamina to go as deep as it perhaps would like to.