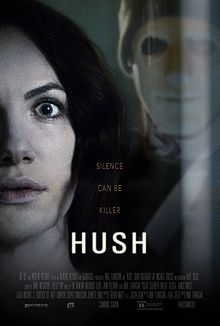 Maddie (Kate Siegel) is a deaf author who’s best-known work is some hard-boiled crime novels that garner her all sorts of fame and fortune. Some of it’s wanted, some of it isn’t. In this one case, when she’s got her friend’s house in the middle of the woods all to herself, that’s especially so when a masked-fan (John Gallagher Jr.) begins to reign down all sorts of terror on her. Maddies’ inability to fully her is one problem in this situation, of course, but she uses her smarts and her wits to, hopefully, get the better of him whenever the opportunity comes around. But yeah, being deaf in a situation like this isn’t ideal and it’s why Maddie, no matter how far she gets, she’s always got the cards stacked-up against her. All she’ll have to do is see if she can wait out the night and survive.

Hush was the little movie that could a year or so ago. It literally came out of nowhere, hit Netflix right away, and oh yeah, was pretty great. It doesn’t feature many big-names at all and the director, Mike Flanagan, before this, didn’t have a whole lot going for him, except for Oculus which was, at the very least, interesting. But what worked best about Hush is that it was so sweet, so simple, and so straight-forward, that it was somehow perfect for Netflix.

It’s the kind of quick, swift and entertaining-viewing that’s worth being seen, regardless of if you can handle home-invasion thrillers or not. For me, while the premise is as conventional as you can get – albeit, with a deaf-woman twist – Flanagan finds smart, small, and interesting ways of turning it on its feet and making it, well, pretty fun and exciting. Just when you think you know where the material is going to wind-up, how sick it’s going to continue to get, or what twists and turns it takes, it somehow goes a different way.

And even when it doesn’t do that, it’s still entertaining enough to the point of where it’s too hard to fully and completely care.

After all, it’s a home-invasion thriller that’s unpredictable, at the very least. It doesn’t really try to break any new ground at all, but what it does do is offer up a new fresh, exciting, and smart voice within the world of horror in Flanagan. Flanagan’s style isn’t necessarily anything ground-breaking, but what he does do that’s smart is constantly keep us experiencing this whole movie through the eyes and, uh, ears of Maddie, never letting us forget that we are just as helpless as her here and it’s going to be really rough to get through it all. Flanagan never quite makes the material as sick or as decrepit as someone like, say, Eli Roth would have, but in a way, he’s much better off for that; there’s a certain respect he feels for this character, as well as the general rules and conventions of telling a horror-thriller story like this and allowing for it to unravel the way it does.

It also helps that in the lead role, Kate Siegel is pretty great. Being Flanagan’s real-life girlfriend, it’s a no-brainer to see her here, but Siegel deserves this role, because so much of what she has to do here is emote and use her face to show off whatever she’s going through and it’s effective. It could have easily been over-the-top or hammy, but it never gets to be that way, as we always believe whatever she’s going through, right from the very beginning. It does also help that Flanagan gives her some interesting shades of character to make her more than just a damsel in distress, caught-up in this unfortunate situation and it proves to go a real long way.

Man. Who would have thunk it? A smart, interesting, and well-rounded female character in the lead role of a horror flick?

Also here is John Gallagher Jr. who, surprisingly, seems to be having a ball as the crazy and deranged stalker here. The only issue with this character is that he’s nothing more than just this; Flanagan’s fine and content with giving Maddie the development she deserves, but never really bothers with this creepy stalker. Maybe that’s purposeful, considering it’s not his story in the first place, but it felt like something was missing in the much larger-piece of this actually rather smart and entertaining horror-thriller.

Consensus: Surprisingly smart and unpredictable, given its simple plot, Hush effectively takes genre-scares and turns them around, while also giving us a star-marking turn from Kate Siegel.