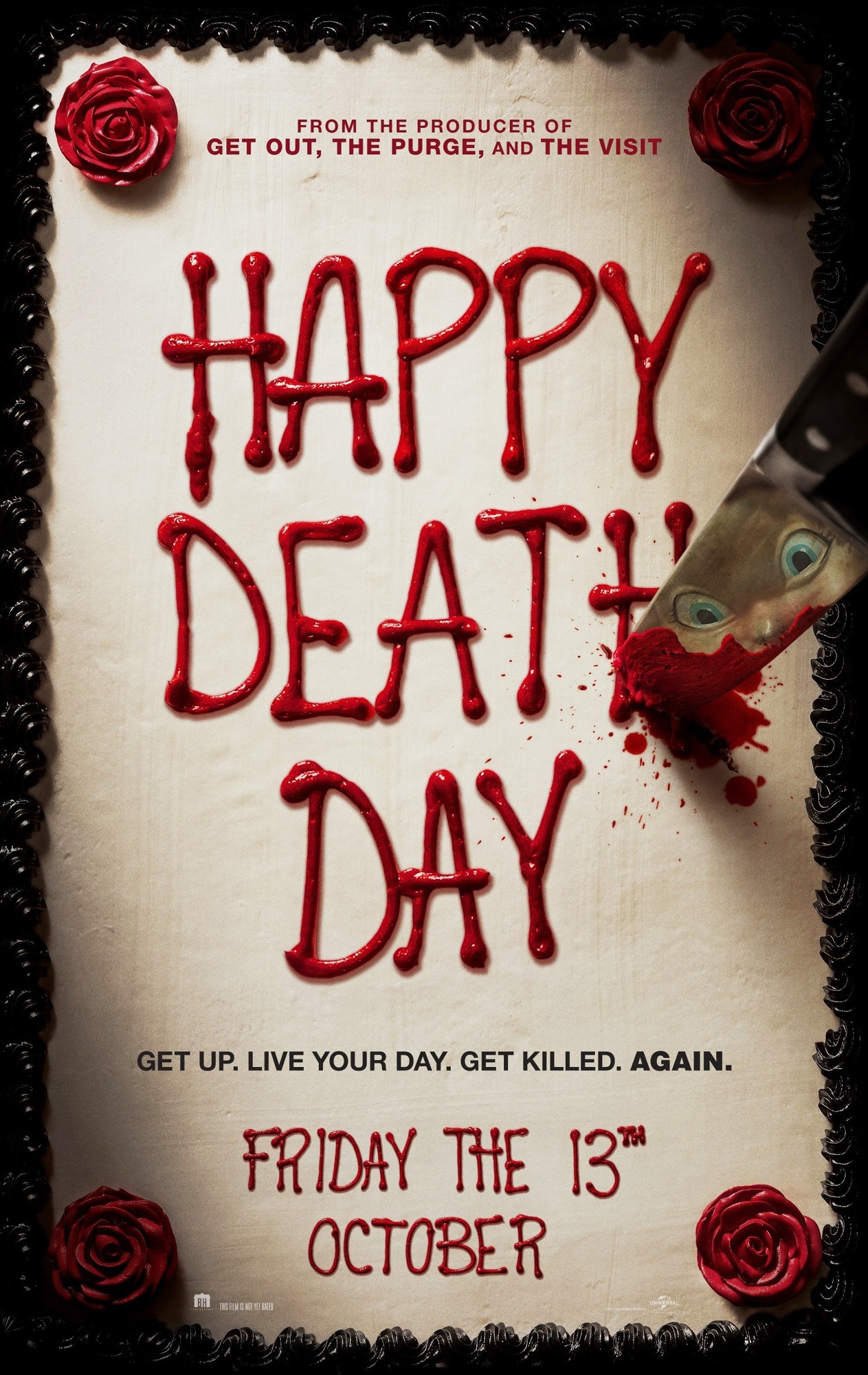 Tree Gelbman (Jessica Rothe) is another college student who, after a rather crazy night of drinking, wakes up in the bed of a guy she doesn’t even know, Carter (Israel Broussard). She takes a Tylenol and gets going to her sorority house, where she has to deal with a great deal of annoying, rather bitchy sisters who get on her, as well as the other sisters, for every little thing. But Tree doesn’t care all that much because she’s got something to celebrate tonight and no, it’s not just a weekend, but in fact, her birthday. Then, it all goes to hell when she’s stabbed-to-death by a masked killer. Bummer, right? Well, turns out that Tree wakes up in Carter’s bed after being stabbed and soon gets the feeling that everything she experienced the day before, isn’t actually the day before, but instead, the same day, over and over again. Why is this happening? How is this happening? Tree doesn’t really know just yet, but what she is going to do is figure out who her killer is and whether or not killing them will actually bring her back to normal, everyday life. And obviously, in the meantime, learn a few lessons about those around her, too.

I don’t really know if you could call your movie “original”, when all you’re doing is stealing an idea that was already original in the first place (in this case, Groundhog Day) and using it for a different setting and genre. Hell, two other movies did the same thing (YA-weepie Before I Fall, and Marlon Wayans-starring Naked), so once again, is it really original? Especially when you actually mention said movie, where the original idea came from?

Probably not, but hey, Happy Death Day is one of the better PG-13 slasher flicks out there that doesn’t feel like it’s actually catering to just a bunch of bored, ADHD-riddled kids who love MTV. It’s got some thought-process to it, some self-aware, funny writing, and oh yeah, a pretty kick-ass female-lead. It’s totally conventional, formulaic, and predictable to a fault, but it’s also a little fun, so long as you’re willing to look past the fact that there aren’t many surprises along the way, and that the plot’s going to be followed, the exact way you think it would be.

But still, the pace and general mood is fun, so why should I care too much?

After all, it’s the kind of slasher-flick made for the MTV-crowd, yet also feels like it’s sort of making fun of them, too. For instance, take Tree, a character who, in all honesty, feels a little too smart for this kind of movie and, lord if he was still alive, would sit perfectly in a Wes Craven movie. She’s smart, sassy, a little mean, a little rude, and oh yeah, actually pretty likable. We’re supposed to look at her and think of the way that she’s constantly partying, sexxing, blowing-off her dad, and not really caring what others generally think of her, as something awful about her, but it actually works in her defense. She’s not a scared, little virgin, waiting for the slasher to come and kill her off in the first few seconds, nor is she the conventional skank who typically gets killed-off pretty quickly, too – she’s got a few tricks up her sleeve and it’s because of her, that Happy Death Day is serviceable.

Surprisingly, she keeps it fun and high-brow, even when it’s definitely not. Some of that praise definitely goes towards the script, but also to Jessica Rothe, who does a lot with this thinly-written role. Rothe, despite being literally 30, fits well into this role, because it never seems like she’s trying too hard to be hip, cool, or even relatable – she’s just another college girl, going through some crap, trying to get by, and having as much fun as she can while doing it. Honestly, this is the kind of character I’d like to just see in a coming-of-ager, forget a silly slasher, but hey, can’t always get everything, right?

But hey, if this means that we see more of Rothe, I’m fine with that.

Consensus: Even with the unoriginal gimmick attached, Happy Death Day still gets by, despite offering very few or no surprises, because it’s fun, self-aware feel, as well as a knockout, drag-out performance from Rothe in the lead.