Jim & Andy: The Great Beyond – With a Very Special, Contractually Obligated Mention of Tony Clifton (2017) 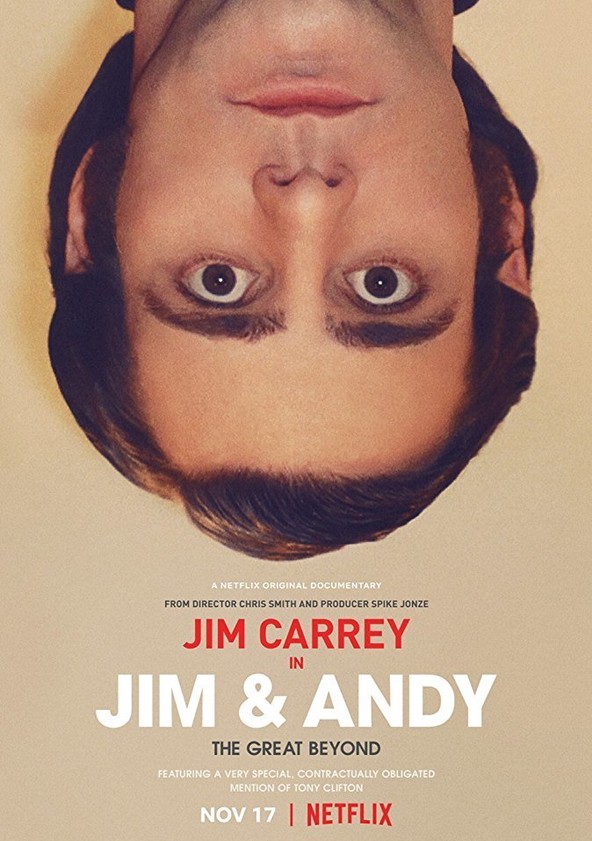 Oh yeah. That movie named after that R.E.M. song.

In one of the biggest roles of his already amazing career, Jim Carrey was set to portray one of the oddest comedians of our day: Andy Kaufman. But because Carrey wanted to do the role justice and honor the legacy of his late hero, he went full-on method throughout the role, literally speaking and acting like Kaufman, regardless of whether or not the cameras were actually rolling. The footage itself has been locked away in a vault for nearly 20 years, but now it’s out and we get to see the true mayhem and craziness that took place, both on and off the set of Man on the Moon.

Jim & Andy will probably give people much more admiration for Jim Carrey, the actor, as opposed to the persona that he constantly plays out there in public. As of late, Carrey seems to have had a screw-loose and with the personal tragedies that he’s hit, it’s no surprise. It’s sad and awful, but it also calls into question why he’s acting the way he is: Was he always this crazy and we just didn’t care? Or, is he genuinely having a nervous-breakdown, but nobody knows whether or not to take it as serious because it’s one of the world’s most known funny-men, Jim Carrey?

Either way, Jim & Andy will remind you that, first and foremost, Jim Carrey is a great actor. He may not always show it and may not always care, but when given the opportunity to, he can work wonders and have us forget about Fire Marshall Bill for a few hours. You could chalk Jim & Andy up to being a puff-piece for Carrey and to show the great workman that he is, or you could chalk it up to being an honest, behind-the-scenes look at Carrey, in character, for a movie that, honestly, hasn’t really stayed around as much as people would like.

But still, that aside, Jim & Andy is a solid piece of work that gives us complete access to the sheer craziness that was the production of Man on the Moon and it works mostly because director Chris Smith was able to track down this footage, get the “okay” from the studio, from Carrey, and just let us soak it all in. It makes sense why the studio wanted to hold on to this footage for as long as they did; Carrey does look like an asshole, but it also makes the rest of the production highly unprofessional and a little amateurish.

But that’s also what makes Jim & Andy so much fun to watch.

We get to see a Jim Carrey like never before and because he’s the only interview here, hear him like never before, either. Sure, he, as well as the movie itself, get a bit too carried away with all of the philosophizing about life, comedy, entertainment, and the meaning of the universe, but when it’s just focusing on Carrey in-characetr, practically egging on everyone around him, it’s truly astonishing. We sit there wondering how long or far this could go on for, and whether or not Carrey himself ever regrets it.

In all honesty, the answers aren’t all that easy to come by, which makes Jim & Andy something of a mystery. It’s not as particularly as deep of a documentary as it hopes it is, or wants itself to be, but it is a solid documentary that pulls back the curtain, shows us the man beyond the laughter, the funny-faces, and the general goofiness, and reveals a hard-worker who did anything and everything to make the role work to perfection. Even if that meant literally making a joke out of one of the greatest directors ever (Miloš Forman), or making a mortal enemy out of Jerry Lawler, it was all for the tribute.

Even if, yeah, the end-result was something magical, within something that was a tad mediocre.

Consensus: Raw, funny, entertaining, and surprisingly chaotic, Jim & Andy is the kind of interesting documentary that doubles as a look at the life of Jim Carrey, but also doesn’t reach the ambitions it sets for itself.