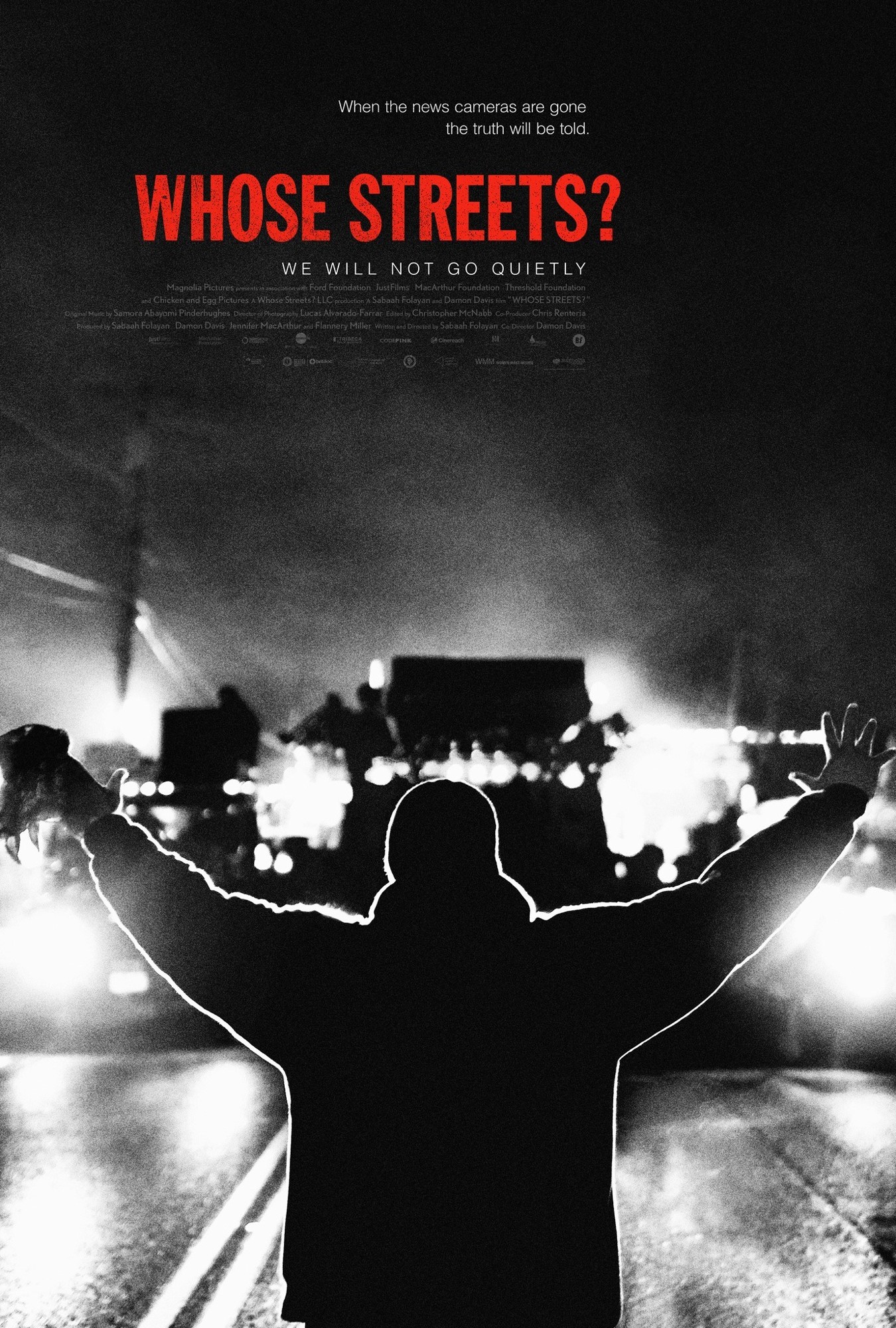 After the killing of an unarmed, 18-year-old African-American by the name of Michael Brown in Ferguson, Missouri, people were just about ready to explode. Years and years of corruption, racism, unlawful and unjustified killings, cover-ups, and systemic violence, were all beginning to catch up now and it was up to a community to stand up, use their voices, use their phones, use their cameras, use their social-media accounts, and most of all, used their fists, to not just get their points across, but spread the word to the whole world: Black Lives Matter. And thus, a powerful entity was created, bringing along all sorts of different activists from around the world, all together for once and a lifetime, to prove that enough is enough. Even if, unfortunately, their voices may not get them anywhere except to another jail-cell.

Whose Streets?, despite it being a perfectly solid, compelling, and sometimes shocking first-hand account of the BLM movement and protests, it also can’t help but feel very of the moment and a little incomplete. Then again, I guess that’s a general problem with a lot of these documentaries; they capture a moment, a point in time, and a popular-issue, that feels like it’s still unraveling as we go on. It’s like when Concussion came out a few years ago, focusing on the issues of head-injuries in the NFL and the possible lawsuits that came, but still felt like it was a little too early on the button.

Maybe some time could have been taken to make it more relevant? Or maybe, it’s just too hard to actually do that? Especially when you’re co-directors Sabaah Folayan and Damon Davis who seem to knew that they were sitting on some golden-footage, had something of a narrative to worked with, and didn’t really care about timelines, or junk like that. They just wanted their movie out for the whole world to see, understand, and take notice to.

Which is what every person who cares about humans-rights in the world should be doing, but sadly, they don’t.

Because what Whose Streets? does is that it helps inform those idiotic, right-wingers who go on and on about how “BLM is offensive to all lives and blue lives”, when in reality, that’s not true. The movie shows why they aren’t protesting the idea of white lives mattering; the message/idea is that those lives do matter, AS WELL AS black lives. It’s an easy solution and answer to what seems to drive so many stubborn people crazy, when in reality, it shouldn’t and Whose Streets?, with some awfully unsettling, but all too relevant images and videos, reminds us why these issues matter.

But most importantly, it reminds us that these all go beyond just fighting an incredibly corrupt police-force and judicial-system. It’s mostly about coming together, locking arms, standing as one, and not letting those at the top, separating us and making us forget that we are one and the same, regardless of age, race, gender, political-beliefs, or general background. We all bleed red, want our country and our planet to be safe from evil-doers, and most of all, we want people to stop being killed in the streets, without any rhyme, or reason, or even a slap on the wrist for said killer.

Especially if those being killed in the streets are young, unarmed black kids. Get it together, cops. As well as America.

Consensus: Even if it can’t help but feel incomplete, Whose Streets? is still an effective piece of work because it doesn’t forget to inform, but remind us what’s worth fighting for, and not backing away from the honest pains and truths of this kind of great activism.