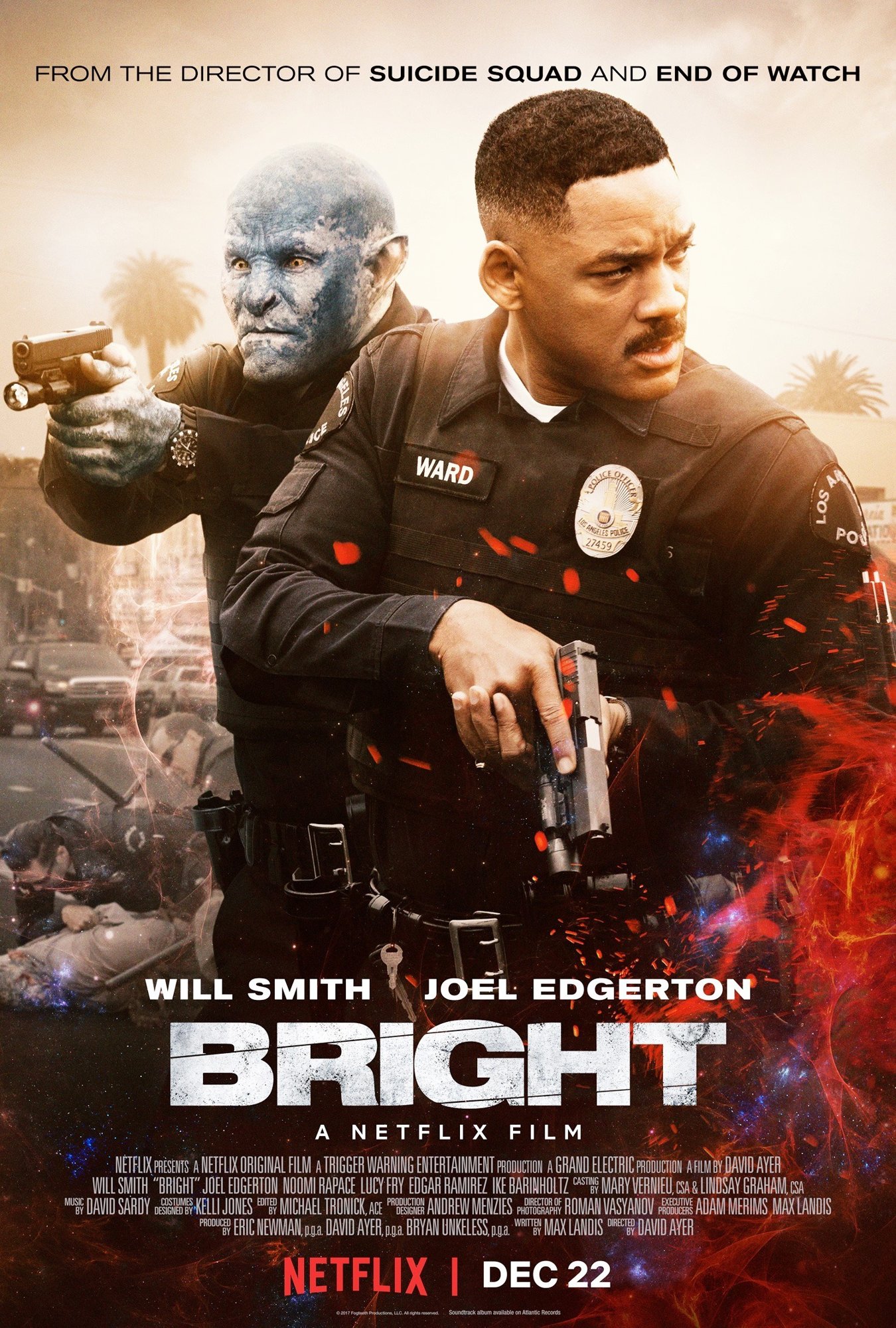 In an alternate present day, humans, orcs, elves and fairies have been coexisting since the beginning of time. And existing amongst all of this craziness are two cops, who do their best to get along and work side-by-side, despite all sorts of prevalent issues in society. There’s Scott (Will Smith), a human who doesn’t trust anything, or anyone that doesn’t look like him and there’s Nick (Joel Edgerton), an orc who is singled-out for what he looks like, despite him wanting to do some real good for this world. During a routine-stop, they find an elf-woman (Lucy Fry), who seems to be on the run and in some great danger. What happens next not only spoil these guys’ days, but their lives as well and has them thinking long and hard about whether they want to stick together as partners, or not.

Bright is a pretty big disappointment, because regardless of how stupid and over-the-top it looks, it could have at least been ridiculously stupid and fun, just as in the way Suicide Squad was. But for some reason, director David Ayer gets stuck with Max Landis’ script that seems to scratch some fun surfaces, but ultimately, doesn’t always know what to do with itself. It’s the kind of script that sets out to be a cross between Bad Boys and Zelda, then change things halfway through to being a movie about how we should all get along, love one another, and oh yeah, get rid of the bad guys in the world.

Not bad sentiments, but considering they’re stuck inside something like this, it just doesn’t work.

If anything, Bright‘s the kind of movie that feels like a rough combination of a solid director, with a pretty lame screenwriter and together, they can’t seem to make much sense of where they want to go. Cause for all the crap some of his movies get, there’s no denying that Ayer knows what he’s doing when it comes to rough, tough and pretty fun action and we get a bunch of that in Bright. Believe it or not, it’s a movie where the shaky-cam doesn’t show up every five seconds or so, and we actually get to see what’s happening on the screen and get an idea of where everyone is, when all the action’s going down. Sounds so simple, I know, but it matters in a movie like this.

But when the action isn’t, the clunky dialogue is and it is, once again, where Bright falters. Some of it can be funny and the world created here is definitely interesting, but there’s too many genres and subplots being tossed around here, that it never comes together. It’s as if Landis kept adding on things to the script as the movie was being shot, and rather than telling him, “no”, Ayer just allowed it all to come in.

Regardless, Bright gets by mostly with the charm of the cast, all of whom feel a tad bit bore and with good reason. Will Smith is doing his usual Will Smith-y thing and is fine most of the time, but yeah, we’ve seen this character a hundred times before; Joel Edgerton is wasted in a role that hides him underneath tons and tons of make-up, not to mention he already looks goofy enough as is, that it’s hard to ever take the character seriously; Noomi Rapace shows up as the bad-ass villain and is just that, and it’s fun; and Edgar Ramirez, in what seems to be the 8th role in-a-row, shows up, reads his lines, looks bored, and disappoints me even more. Why has Hollywood failed this guy so badly? Seriously, guys.

Consensus: Bright is big and stupid, and at times, can be a little bit of fun for that, but the messy and bloated script can also get in the way of what should have just been a silly time at home, Netflix and chillin’.