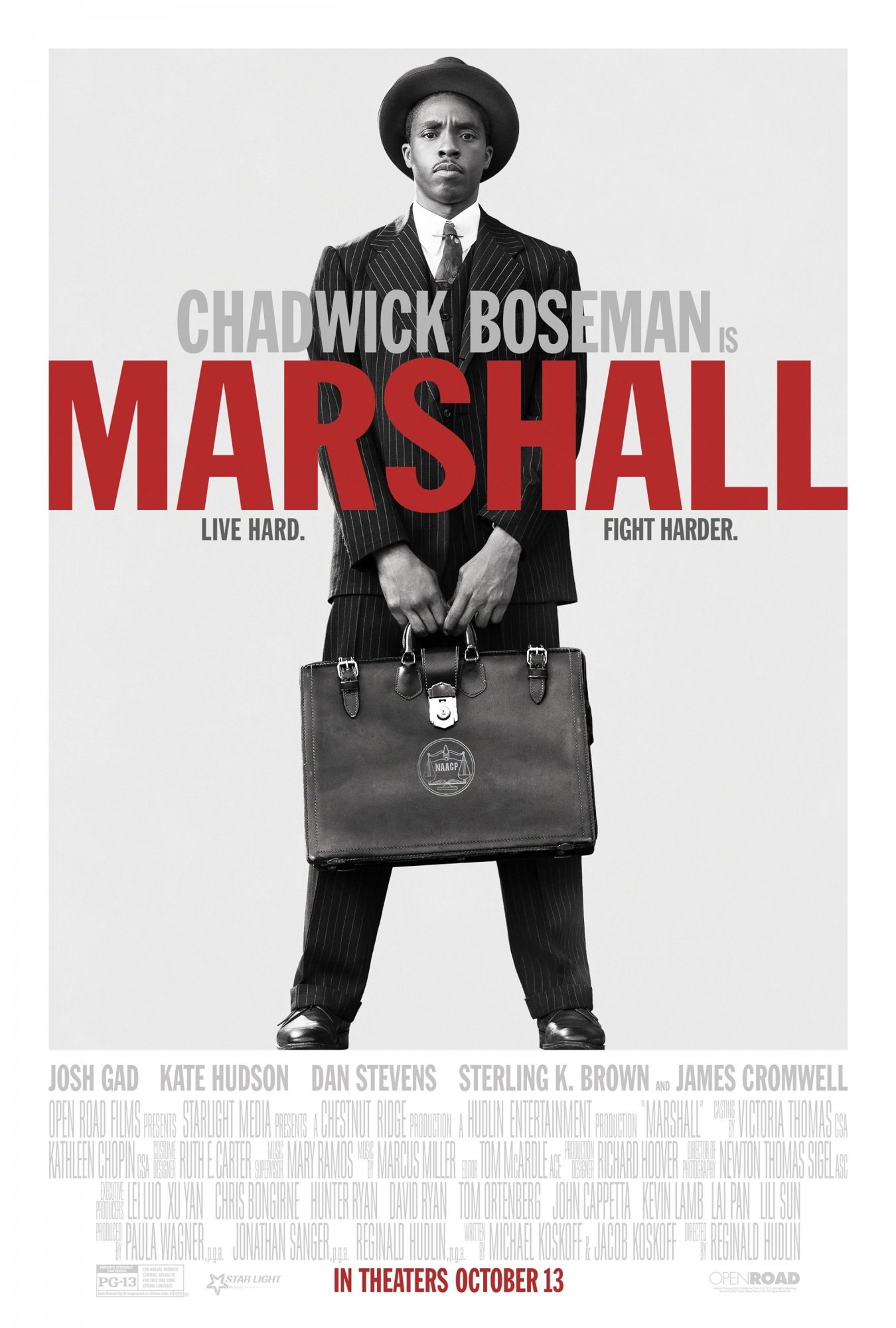 A young Thurgood Marshall (Chadwick Boseman) faced one of his greatest, roughest, and toughest challenges while working as a lawyer for the NAACP. Travelling all the way to the ultra-conservative Connecticut for a case in which wealthy socialite Eleanor Strubing (Kate Hudson) accused her black chauffeur, Joseph Spell (Sterling K. Brown) of sexual assault and attempted murder. Thurgood believes that he has the case done, but finds out that the judge (James Cromwell) doesn’t want Thurgood to speak in his courtroom; so, his co-counsel, Sam Friedman (Josh Gad), a local Jewish lawyer who’s never handled a criminal case before in his short career, takes over as the lead. It’s hard for Thurgood to sit back and watch it all go down, but he knows and understands that in order for change to happen, you sometimes have to wait for it. Oh, and fight for it, too.

What’s really odd about Marshall, and what ultimately keeps this away from being a much better movie is that all of the ads for it would have you think that it’s a Thurgood Marshall biopic, where we got to know just about everything about the man, from the inside, the out, and he would be literally in center-stage. But nope, in fact, he’s much more of a supporting-player to Gad’s Friedman who, in real life, was the lead on this case. In a way, you can’t fault the movie for history itself being so inconvenient (as well as incredibly racist), but you can sort of put the blame on it for making you think you’re going to get one thing, then something else completely, and wondering, “What was the point?”

Sure, it is to tell a good story, that has meaning and thought behind it, but did we really want that? Or did we want something that would truly test our minds, make us think, and give us a clear, well-deserved insightful look into the life of Thurgood Marshall, a civil rights hero for all times?

Personally, I wanted much more of the latter, but hey, that’s just me.

That said, Marshall, not as a Thurgood Marshall-biopic, still works as a courtroom drama that does tackle some heavy and hard issues about racism, discrimination, and general issues with the law and in that sense, it’s fine. Director Reginald Hudlin, who hasn’t made a movie in what seems to be 15 years (Serving Sara was his last, yikes), seems to know what he’s doing behind the camera in order to make a lot of what is familiar and has been done, many, many times before in these kinds of movies, somewhat fun and exciting. It’s odd that perhaps the most sterling moment within the courtroom is the actual jury-selection itself, but that goes to show you that the movie knows a thing or two about what makes a solid courtroom drama, tick and tick. You may know what the outcome of the case is, but you still get all wrapped-up in what’s going on that it works and you forget about the rest of the movie’s shortcomings.

Oh, and it also helps that the ensemble is pretty great here, too, with Gad taking over the lead in a solid way. Sure, he gets a lot of crap for being over-the-top and a total ham when it comes to comedy, but he’s downplaying it a lot here and it’s effective. We like this person and although he starts off a bit dull, we start to see that there’s more to him that makes him something of a SJW, but also an overall good guy. He and Boseman have an odd bit of chemistry that’s a lot more of Tango & Cash, than Abott & Costello, but it still works because Gad’s a little silly, and Boseman is chock full of suave charm.

Speaking of Boseman, as good as he is here, he deserves a little more.

Yes, it’s a movie about Thurgood Marshall and while he’s not entirely a supporting-player, Gad has a lot of the heavy-lifting to do and it’s a tad dispiriting to watch. We know that he can take over a movie and do the heavy-lifting, so why not give him the chance? Either way, he’s still good, as is Sterling K. Brown, Dan Stevens, James Cromwell, and an against-type Kate Hudson, but sometimes, it’s nice to get these great actors, give them great roles to work with, and let them work their magic.

Consensus: Marshall isn’t necessarily the Thurgood Marshall biopic you’d expect, but it does get by on being an old-fashioned, solid courtroom drama, with a couple of good performances to keep things entertaining.