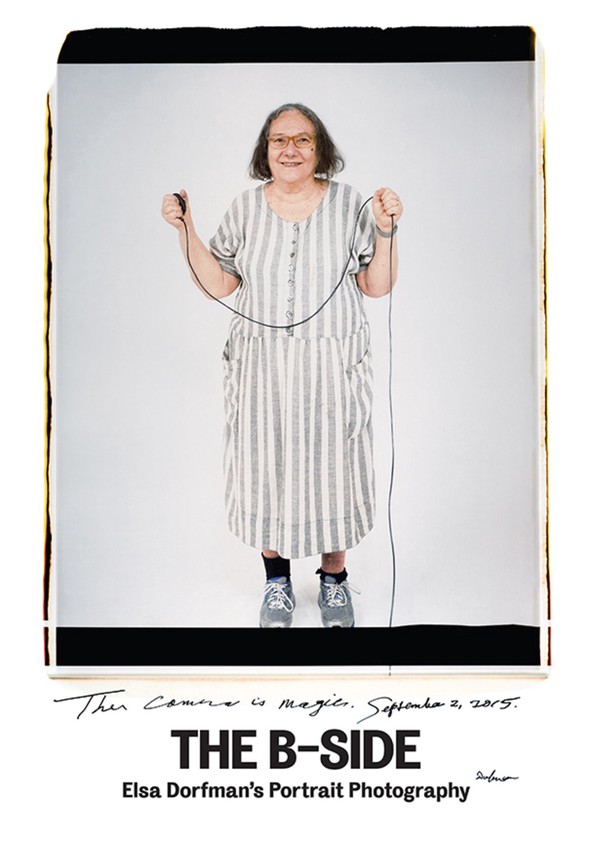 What’s film? Thought that was what “digital” meant?

Elsa Dorfman is one of the most well-known and celebrated portrait photographers of our time. She’s used a rather large piece of film that not many people know about, or even use, and has gained so much traction that she was able to take the pictures of Bob Dylan and Allen Ginsberg, to name a few. But now as she’s getting older, Elsa is realizing that the times are indeed a changin’, and with that, she’s also realized that they aren’t making her kind of film any longer. Now, she’s stuck possibly thinking of moving on to the digital-age, or better yet, just stopping altogether with the picture-taking. After all, she’s over 70 years of age and she probably owes it to herself, as well as her family, to possibly sit down and take a break.

Errol Morris is fascinated in what Elsa Dorfman does and not necessarily about who she is as a person, and that’s okay. As a person, Dorfman’s charming, happy-go-lucky, and generally pleasant, and that’s all fine for a documentary about her and her life. But what fascinates Morris about her, as well as us, is what she represents – this old-time, that seems so long ago, where ancient artifacts like film were held up to a higher-standard. You don’t have to be a photography-lover to appreciate what Dorfman represents and stands up for, but it’s hard not to feel the pain and sadness in her eyes when it becomes all too clear to her that film is going the way of the dodo, people are using it less, and yes, digital is the new way.

In Elsa’s mind, it isn’t and it’s fascinating to see her realize this and accept this, yet, still stick to her guns. The B-Side is about this battle of film vs. digital, new vs. old, retro vs. modern, but it’s also just about the longevity that lasts in a picture. One of the more interesting and compelling little bits of the B-Side is when Elsa is going through all of the subjects she’s had throughout the years pose for her, as well as the ones that the couples didn’t want. It’s an interesting concept to remember that this is why people take pictures and pose for huge pieces of film like this, even if everyone’s using their phones and taking selfies with their tongues out, and hash-tagging all over the place.

Yes, I know I sound old, but with this movie, it’s hard not to.

The B-Side gets you on its side immediately and in all honesty, despite its very short run-time still feeling like a little too long, it’s still a joyful and pleasant movie. We learn more about Elsa, her life, the cameras she uses, and why photography means so damn much to her. The movie is clearly on the side of using film to provide a snapshot into the past and remind us of something forever there and permanent (which is ironic, considering that the movie was clearly done using digital video-cameras), but it also knows that times change, trends change, and people use different things, for all sorts of activities in life.

Film will always be there, but who will use it and how many, well, that’s an entirely different question.

Consensus: Even at an-hour-and-16-minutes, the B-Side may meander, but still argues the idea of old and new, while also giving a pleasant snapshot into the life of Elsa Dorfman, her life, accomplishments, and most importantly, her portraits.