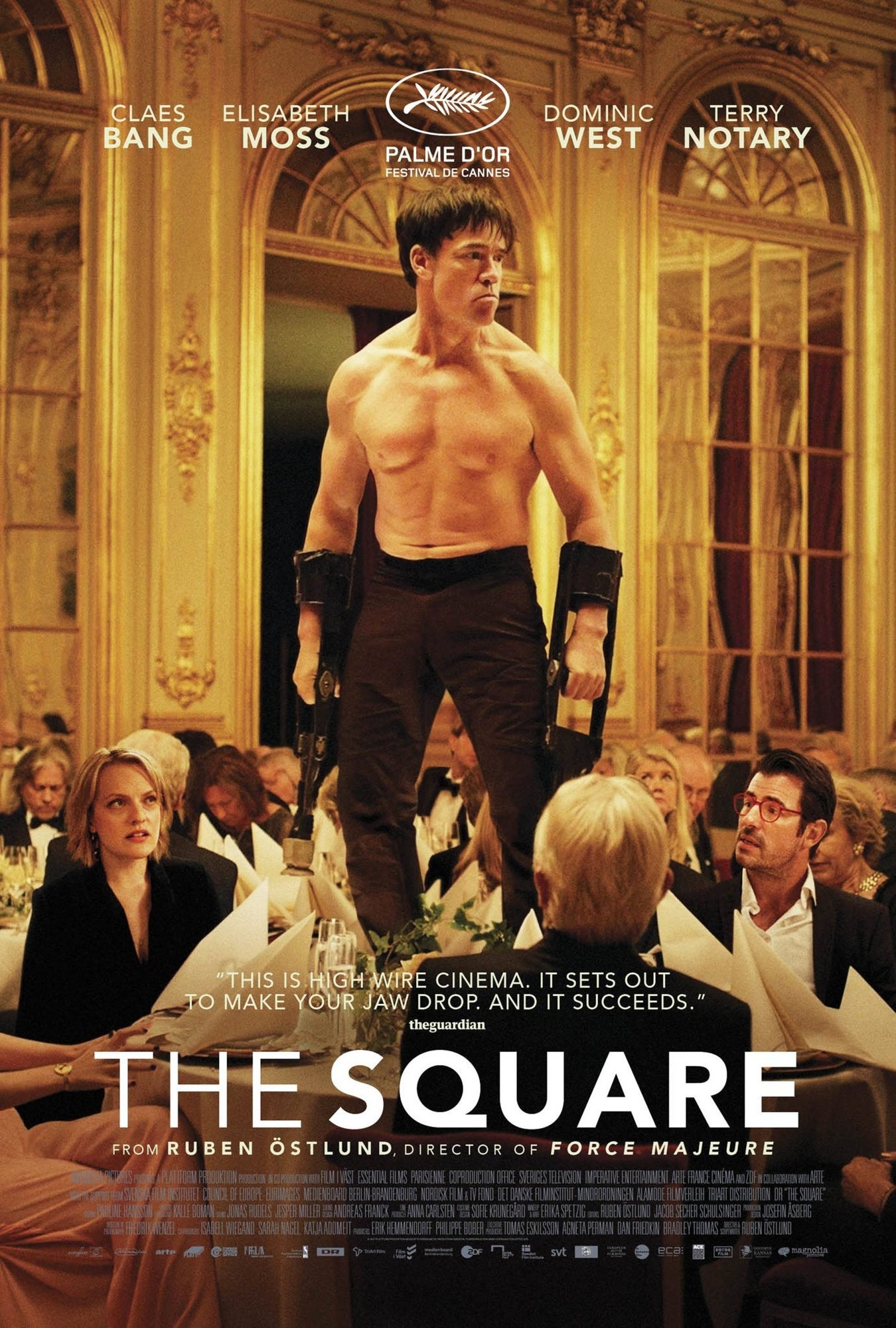 Christian (Claes Bang) is the curator of an art museum in Stockholm and is already feeling the pressure of having to live up to his bosses’ standards. Obviously, money is tight within the art world and one way for them get any sort of revenue is by building up buzz, which comes at a price. A new PR team is hired and all of a sudden, Christian finds his life changing for both the better, as well as for the worse. He meets a reporter, Anne (Elisabeth Moss), who he takes a liking to, even though he’s not quite sure what her motives are; he loses his phone and does whatever the hell he can to find it; and oh yeah, there’s an artist (Terry Notary) that is causing all sorts of trouble and may prove to be a huge issue somewhere down the road. Either way, it’s not looking all that great for Christian, but at least he’s still a nice, relatively progressive guy who cares hardly and deeply about helping out those less-fortunate, right?

The Square is the latest from writer/director Ruben Östlund and you can tell that he’s got a certain style that takes awhile to get used to. He’s a comedic-writer in the sense that his comedy is subtle, more thought-provoking, and takes awhile to kick in, with punchlines only ever making total sense, five or six scenes down the line from which they originally appeared. It’s why his movies can be a bit of a challenge, but once you get used to them and what he’s doing, it all works in spades because it’s hilarious, but it also has a point.

And with comedy, isn’t that what we want? A point?

And with the Square, while a lot of people will look into this as an art-satire and leave it at that, one of the key aspects of life that Östlund seems to be discussing is doing the right thing and whether or not that is such a thing. It’s a constant theme in all of his movies, where people’s actions are held up to a higher-standard for scrutiny, regardless of their intentions, and it makes you wonder about the world around you. The Square uses the art-world as a background for its issues about homelessness, racism, and of course, sexism, but it also works – this supposedly loving, accepting and progressive world full of intellectuals who are supposed to care, don’t actually seem to and just want to help themselves.

What’s even worse is that we get constant shots of homeless people begging and sleeping on the streets, wanting anything resembling an penny, whereas these art-museums, and the people who frequent them, are throwing near-millions on what some would constitute as “garbage”. Of course, others wouldn’t and it’s the slippery-slope that the Square seems to take notice of and mention quite a few times, and for that, it’s an interesting watch. There’s plenty of laughs for sure, but there’s something more behind the laughs that make them all the more effective.

Then again, at two-and-a-half-hours, the Square can tend to get a bit carried-away. However, a part of me chalks this up to Östlund probably having so much fun with this material and given a lot of free reign to do whatever he wanted to, that he couldn’t help himself. If that was the case, the Square offers us a lot of memorable and compelling moments, strung together in something that could have either been cut-down by 15 or 20 minutes, or paced a tad bit quicker.

Either way, it’s a long movie and probably didn’t need to be, regardless of how funny and sometimes awfully realistic it can get.

But hey, at least more time spent with Claes Bang the better, right? Oh, and Elisabeth Moss, too, so yeah, it’s not all that bad. Just a little bit too much. Sort of like art itself.

Consensus: Less of a satire on the art-world and much more of a satire on everyday human interactions, the Square is a funny, thought-provoking piece that can be long, but also benefits from having more ideas on its mind than most comedies out there.