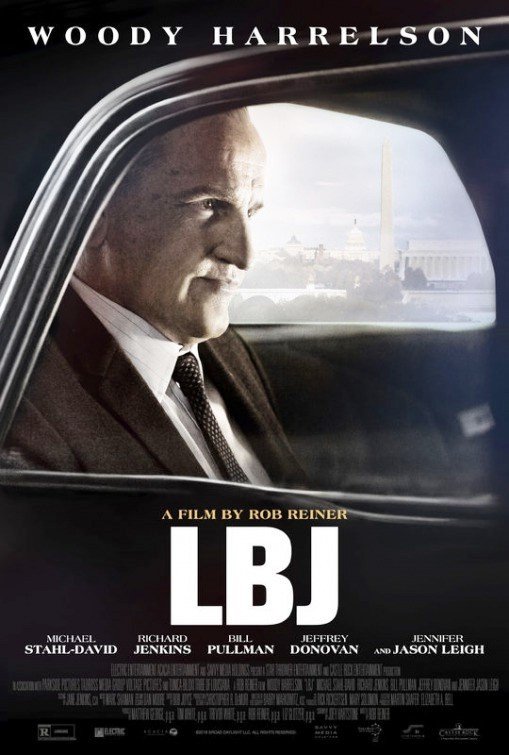 Lyndon B. Johnson (Woody Harrelson) had a pretty rough ride to the presidency. For one, he lost the Democratic-bill to John F. Kennedy (Jeffrey Donovan), and was only put on as Vice President so that, come 1968, Bobby Kennedy (Michael Stahl-David) could run on his own and not have to worry about LBJ’s certain popularity. And if that wasn’t enough, every chance and opportunity LBJ got to do actually do something and make a difference, Bobby fought him on it. Why, though? Well, before LBJ can figure out the answer, JFK is assassinated, leaving it his chance to shine and become President of the United States of America. However, it’s clearly under a great cloud and without much of any idea of where to go next, LBJ decides that it’s time to fight for Civil Rights; something he never quite fought for until fairly recently at this point. It’s what would not only cause him to gain a lot of respect, love and admiration, but also, a lot of anger and hatred, from those who thought they truly knew him for the hardcore racist he pontificated as being.

LBJ tries to cover a whole lot of ground in literally just an-hour-and-a-half and it should be commended for trying to get it all in during this time. What would have probably worked better as a long-winding, heavily episodic miniseries, LBJ instead focuses on LBJ’s happy times in the office, where even though he was causing all sorts of riff-raffs between Republicans and Democrats, times were still a lot sweeter and relatively simpler. You know, as opposed to when, later in his term, he practically escalated all issues in Vietnam, thus starting one of the most tragic and unnecessary wars of anyone’s time.

But hey, at least the movie sort of makes a mention of that at the tail-end, right?

Regardless, LBJ gets a lot of milage out of Rob Reiner’s quick, almost care-free direction, and how well it goes along with Joey Hartstone’s even quicker script. What works about Hartstone’s script is that we do genuinely get to see and understand LBJ for the person that he may have been, or at least, we want to believe he was; there’s a lot of grimacing and goofy one-liners that he spouts off, but mostly, he was just a somewhat confused and frustrated politician who wanted to be respected nearly as much as his peers. The LBJ we get here is a tad too close to being the Lincoln we got in Lincoln – he’s always got a story to tell, something witty on his mind to say next, and he mostly gets by Scott-free on certain idiotic decisions.

Granted, the LBJ we get here isn’t perfect – as I said before, he’s naive, sad, and a little dorky – but mostly, he’s a cheerful and sunny guy who, despite his crude tendencies, genuinely loved his job and fought long and hard for Civil Rights, when literally nobody else seemed to want to. In that sense, the movie shines a light on what LBJ fought for and accomplished even if, as usual, there’s always a downside to one’s life and career. Thankfully though, the movie realizes certain issues that LBJ had, at least somewhat embraces them, and moves on, hoping that we don’t think too long and/or hard about what his legacy would ultimately become.

It also hopes that we’d just stop all our negativity and enjoy the hell out of Woody Harrelson’s performance, which is, as expected, easy to do.

Once you can get past the awful make-up job, that is. The same can’t be said for Jennifer Jason Leigh’s role as Lady Bird Johnson who, despite doing all she can, succumbs to looking way too much like a cartoon when, in reality, she didn’t really need to. The past few years have been kind to Lady Bird portrayals, in terms of how she looks, with Melissa Leo in All the Way and Beth Grant in Jackie, all not only doing great jobs, but not needing tons and tons of make-up and costumes to help them out. Just standing there, having an accent, and being strong, is more than enough, and it’s odd why this movie decided that Jennifer Jason Leigh, one of our more underrated actresses, needed to be under some huge prosthetic nose?

This is a question that deserves an answer, above all else. I’ll wait.

Consensus: In no way the perfectly succinct biopic on the President’s life, career, and legacy, LBJ instead uses a small bit of time to remind us of the good he did, his charisma, and constant wit, that may or may not be entirely true, but is still entertaining enough to watch and believe in for a short while.