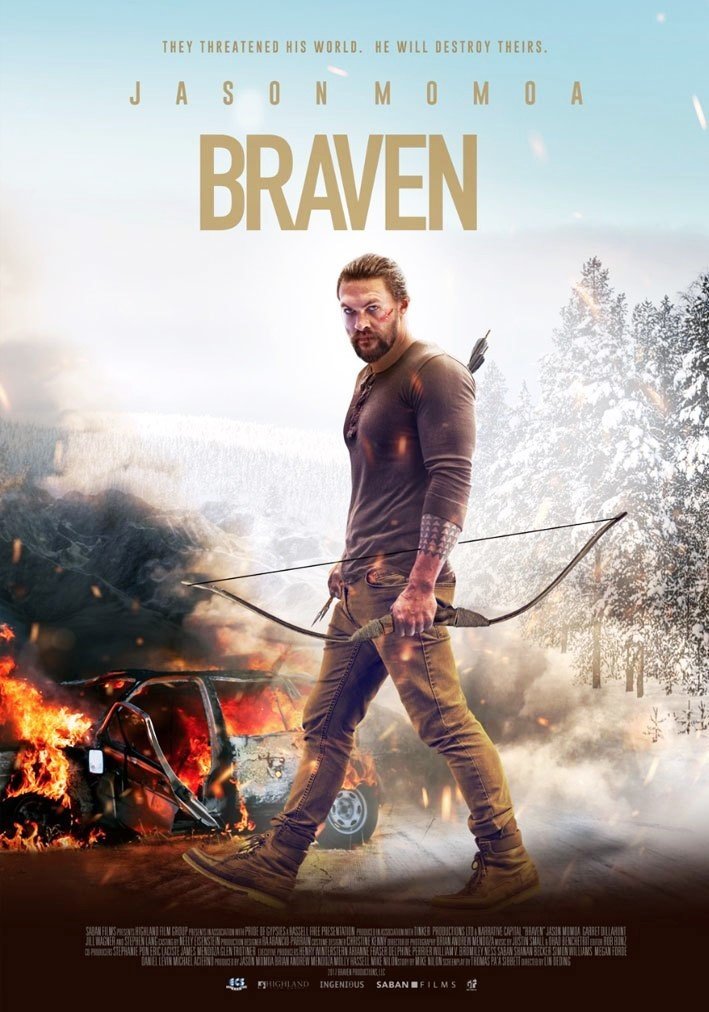 Never mess with a dude named Braven. Especially if he looks like Jason Momoa.

Joe Braven (Jason Momoa) is a typical family man who loves his wife (Jill Wagner), his young daughter (Sasha Rossof), and of course, his pops (Stephen Lang), but life with them isn’t always easy. His dad, who is neurologically disabled from a brain injury, doesn’t always get along with the town they live in and of course, it’s poor Joe who has to pick up the pieces and figure out just what to do with the guy. Is it time to put him in a home? Or, should he spend the last few years of his dad’s life with him, doing the absolute best that he can? Regardless of what he should do, Joe decides that he and his pops should head on up to a cabin that they use all of the time, to relax and get away from the rest of the world. Little do they know, however, that a gang of drug-dealers are looking for this very cabin because one of Joe’s co-workers stashed a crap-ton of heroin in said cabin. Now, it’s up to Joe to protect his father, as well as his daughter, who went on the trip because she wants to spend more time with her daddy.

In case you couldn’t tell, Braven is a pretty silly movie and because of that, it’s easy to not take it too seriously. The Braven family is literally a group of ass-kicking simpletons who know how to use bows, arrows, axes, guns, knives, and any sort of weapon that they can pick up, making this battle a little less than suspenseful. For one, the movie’s not as dark or as dangerous as you would expect it to be, so when the drug-dealers show up, you sort of already know who’s going to win and how.

I don’t know. Braven‘s an odd movie because while it is B-movie silliness, it’s also the kind that feels a little too cheap and forgettable for its own good. Director Lin Oeding has a background in stunts and you can tell; the moments where it’s just two characters brawling and duking it out, mono-e-mono, are actually staged quite well and look like actual thought was put into them. They can be fun and they keep the movie interesting, even when it seems like the budget was so low that the special-effects used are pretty awful and whenever anybody speaks, it’s just nails on a chalkboard.

So once again, yeah, it’s not the worst thing ever, but it’s just another B-movie that’s just dumb enough to be sort of fun and make the best of what it is. Should it have been so much more? In a way, yes. You’ve got a solid cast full of talented folks like Garrett Dillahunt, Jason Momoa, Stephen Lang, and Jill Wagner, yet, they’re saddled with some lame dialogue, and a whole lot of shooting and ass-kicking. Sure, they make the best of it, but shouldn’t there be a little something more like, I don’t know, heart, emotion, or even humor?

I really don’t know and it’s why it’s weird to see Momoa here, as I thought he was going on to bigger and better things. But for some reason, even though he’s starring in Aquaman later this year and seems to get big roles in mainstream blockbusters, is still stuck doing bargain-bin Z-budget flicks that not even someone like Scott Adkins would get stuck doing.

Is it that he needs a new agent? Or is it that there just aren’t many juicy roles out there for six-foot, muscular, scary-looking men like him? Cause the guy’s charming, he’s clearly got a sense of humor, and he knows how to act, it seems, so why? Maybe this issue will be addressed in the year-to-come, or maybe not. Either way, I hope we don’t see another movie like Braven, or at least, not with Jason Momoa starring in it.

Consensus: As typical as you can get with a B-movie, Braven has some fun and exciting moments, but is mostly just another low-grade, somewhat silly action-thriller lacking any sort of humor or personality to really make sense of its solid cast.