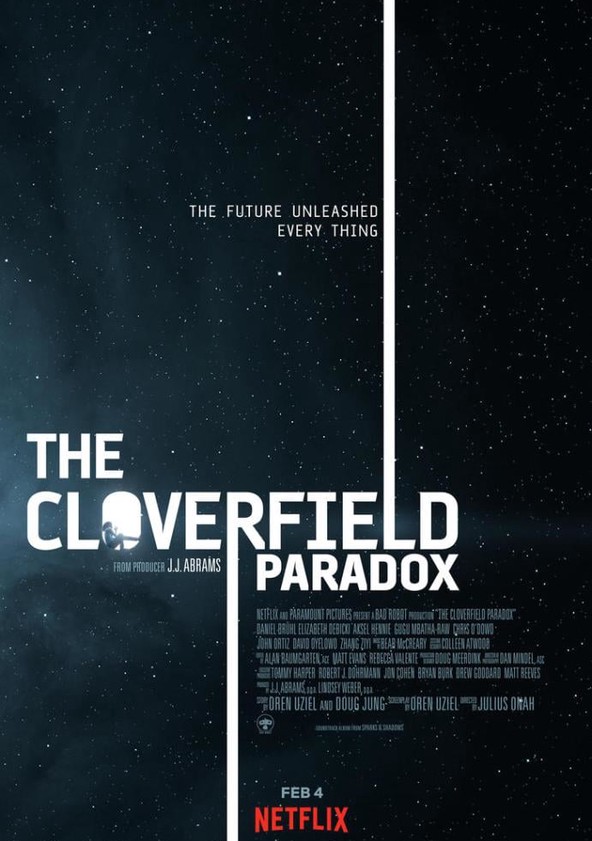 Wasn’t this just about a big monster in the first place?

In the near-future, Earth’s resources are dwindling and it’s up to a group of scientists to set out into space and try to find whatever they can find. However, they run into certain issues when a random force comes aboard and seemingly starts killing each and every passenger, without so much of a reason why, or a simple explanation of what it is. Now, the few that are left, must find a way to travel safely back to Earth, in hopes that they can get out of this problem alive. But then, it also turns out that there’s a whole bunch of different timelines, paradoxes, and dimensions going on here that they don’t even really know or understand just yet.

Oh, and on Earth, it’s not so safe and sound, either, which I guess may be a bit of a spoiler.

In all honesty, I’m not against the marketing and the whole idea surrounding these Cloverfield movies. The secretive filming and marketing of the movies, where it’s so quick you hardly even know that it’s even on the shelf and/or about to come off of it, is honestly pretty neat and very much of its time; our attention-spans are so limited nowadays that remembering the certain date to when a movie is going to come out, really gets left by the waist-side. The quicker and easier, is always the best.

And also, how these movies are being based in/around the original Cloverfield occurrence, is really interesting. Some may say that the past two spin-offs could have easily just been simple, small sci-fi thrillers without the contrivance of being tied-in as a Cloverfield product, but as long as they’re good and amp-up the mystery enough, than I don’t care. As long as they stay interesting and entertaining, that’s all I need.

And the Cloverfield Paradox, formerly named God Particle, is not what I need.

Hell, it’s not even close.

For starters, the movie is awfully conventional and feels like a bargain-bin rip-off of either Alien, or even last year’s better and way more entertaining Life, that just so happened to get a big-budget and starry-ensemble because of it being a product of Cloverfield. The premise has been done-to-death, there’s no real shocks, or surprises, and the contrived tie-ins in and of themselves can’t help but feel like something thrown in during post, where they had to make some sort of sense of the title. But really, if the predictability wasn’t enough, the movie also then has to throw tons and tons of random twists and turns that, in essence, don’t make any sense – there comes several points in the movie where it seems like stuff is being made-up on-purpose, logic is being thrown away, and the galaxy is being used as a backdrop to where all of the craziest and wildest can and will happen.

In a way, that’s exactly how sci-fi is and how it will always work, but Cloverfield Paradox doesn’t earn any of that. It gets lost in its own confusion and eventually just settles on watching as cardboard cut-out characters die off, have revelations, and try to do heroic stuff, and we honestly don’t care about any of it. It’s a shame because the cast and crew assembled is just magnificent and you have to wonder just what got the likes of Gugu Mbatha-Raw, David Oyelowo, Daniel Brühl, John Ortiz, Chris O’Dowd, Aksel Hennie, Zhang Ziyi, and most of all, Elizabeth Debicki, in the same room to deliver this kind of material.

Was it the paycheck being that good? Did they hear J.J. Abrams’ name and automatically assume he was directing? Or did they just not really care and decide to give it a shot? If, in all honesty, it is the later, they aren’t to blame, because I imagine that’s how everyone will be watching the Cloverfield Paradox: On a whim and out-of-curiosity, depending on how the final-product actually turns out. Which is an issue, of course, but when it’s already on Netflix, what’s the issue?

Consensus: With such a talented cast and promising premise, the Cloverfield Paradox disappoints with its awful script, ridiculous twists and turns, and material that’s not up to the standard of the past two movies, even if it tries so very hard to keep the uninteresting mysteries going.