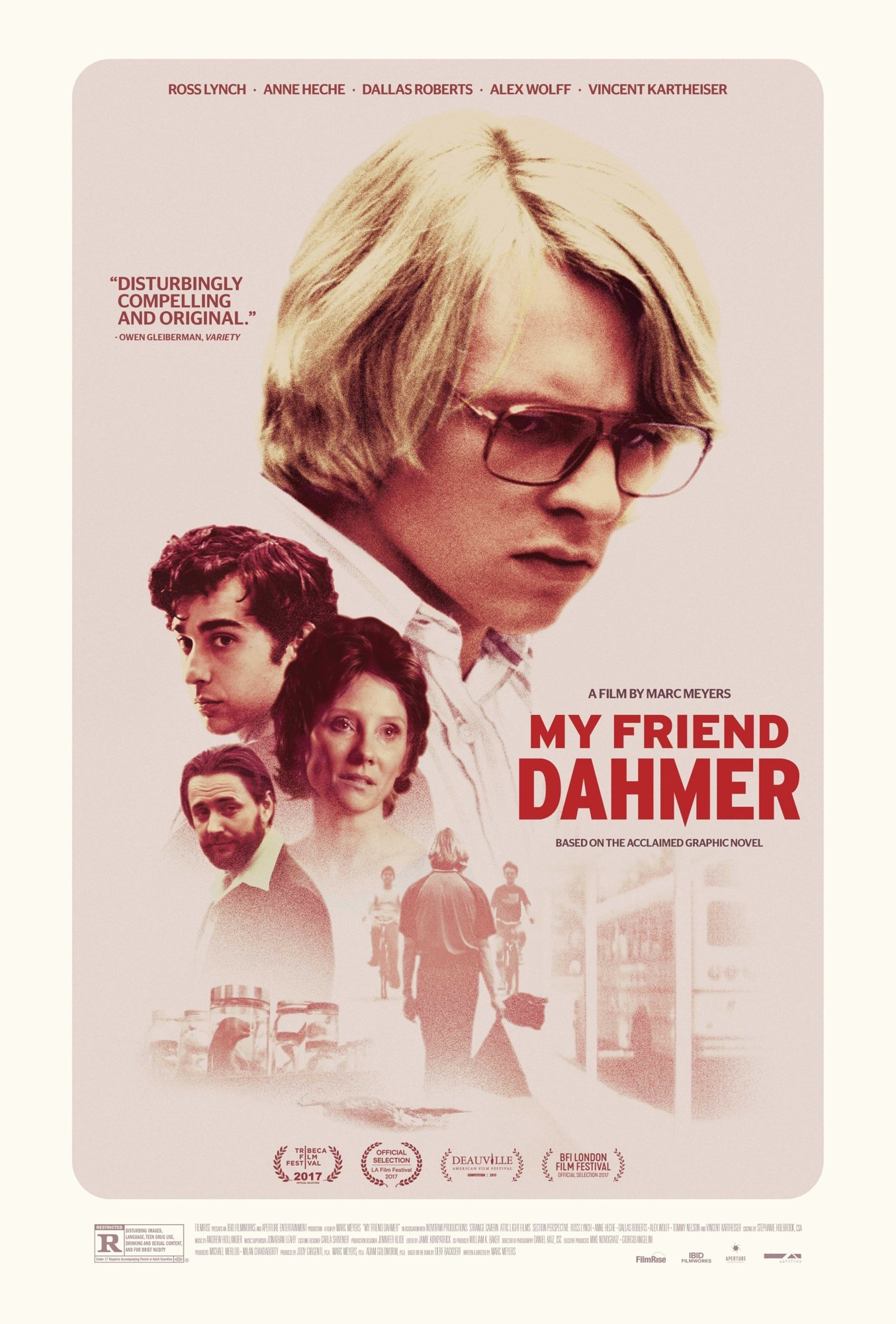 There’s always that one kid in every high school class.

Jeffrey Dahmer (Ross Lynch) was never the most popular kid in school. In fact, he was quite a loner. He never really talked to anyone, normally kept to himself, and gradually got by on just staying quiet and letting everyone else around him act-out and whatnot. Because when he wasn’t in class, Jeffrey was out on the streets, picking up roadkill, planning out violent murders, and putting up with his parents, who seemed always on the brink of divorce from day one. But something changes when Jeffrey decides to act-out in class one day, getting attention from his fellow classmates and most importantly, John Backderf (Alex Wolff), who would take him into his little friend group and continuously have him spaz-out in public as a joke. And while Jeffrey was more than open to the idea of continuing on with this joke, the times change, people start to grow up a bit more, and yeah, jokes die. But for Jeffrey, times really do change over the course of his senior-year and it’s what eventually ends with him becoming the serial-killer we all know him for now.

My Friend Dahmer is just like any other dark and relatively disturbing coming-of-ager, that deals with frustration, paranoia, depression, puberty, sex, drinking, smoking, drugs, and all of the other typical conventions we throw in with this genre, but it also just so happens to revolve around a serial-killer. Of course, My Friend Dahmer is a smart enough movie not to bury the lead and have Dahmer start offing people right away because here, like in reality, we just see him slowly, but surely, become this enraged and upset manifesto of a person that went after young men, raped them, and slaughtered them. We see it all gradually happen, while we also watch as he grows up and believe it or not, it’s really sad to watch.

Like incredibly sad and it’s all because we actually feel something for Dahmer. It would have been easy for writer/director Marc Meyers to just paint Dahmer as a social misfit with little-to-no likable qualities, but the Dahmer we get here, can sometimes be charming and fun-to-be-around, even if ultimately, it was all for upsetting reasons. The Dahmer we see here is a sad, lonely and meditating sociopath who sees and hears everything around him, takes mental-notes and cues, and knows how to act in certain situations, just so that he can somehow fit in and be considered “cool”.

Meyers is smart here in his direction in that he never fully lets us in on Dahmer’s head, what his intentions are, and leaving a lot of mysteries in the air. But that feels necessary here for a movie that’s about what could have sprung all of this anger and intensity into Dahmer’s mind, when in reality, it may have been there all along and all he needed was that extra push to actually go off the deep-end. But regardless of what really was the turning point, My Friend Dahmer remains compelling and intriguing, if only because it reminds us a lot of high school, but it’s also hard to not turn away from Dahmer, look at his life, the people involved with it, and wonder just what the hell happened.

And the movie itself often questions itself as if the people involved with this story (the movie is adapted from a graphic novel done by Backderf himself), really deserve any of the blame. Meyers doesn’t necessarily judge any one character here for being an awful or inhumane person, as much as he just judges a good portion of them for being stupid, rather egotistical high school kids who don’t really know the extents of their actions, until many years down the line and/or something awful happens. Backderf, as played very well by Alex Wolff, seems like he gets a middling-rap in that he’s along for the ride of pointing and laughing at Dahmer when he’s pulling pranks, but when it comes to get a little too serious, he backs off and doesn’t know what to do next.

But perhaps the most interesting aspect surrounding My Friend Dahmer is the lead role itself, Ross Lynch as the Dahmer. For one, it’s one of those against-type roles that could get anyone weary of it just being pure stunt-casting at its worst, but for some reason, it actually kind of works. Lynch’s background may be from sunny and bright Disney channel stuff, but as Dahmer, he basks in the sadness, the darkness, and the general creepiness of Dahmer that he walks around with in just about every scene. But the truly scary moments come from when Lynch has to play up the charm of Dahmer’s actions, where you see him laugh and smile, yet, also know that it’s so incredibly empty. It’s a truly great and challenging role for Lynch, where he’s always looking for extra-dimensions to a character that could have easily been labeled as “dorky creep”, and it’s why I’m looking forward to whatever Ross Lynch is up to next.

As long as it’s not that Disney stuff. I’ll wait for that time to come around, I guess.

Consensus: With a thoughtfully careful direction and script, My Friend Dahmer plays well both as a coming-of-ager, and character-study of a very challenging and troubled individual, expertly played by Ross Lynch.