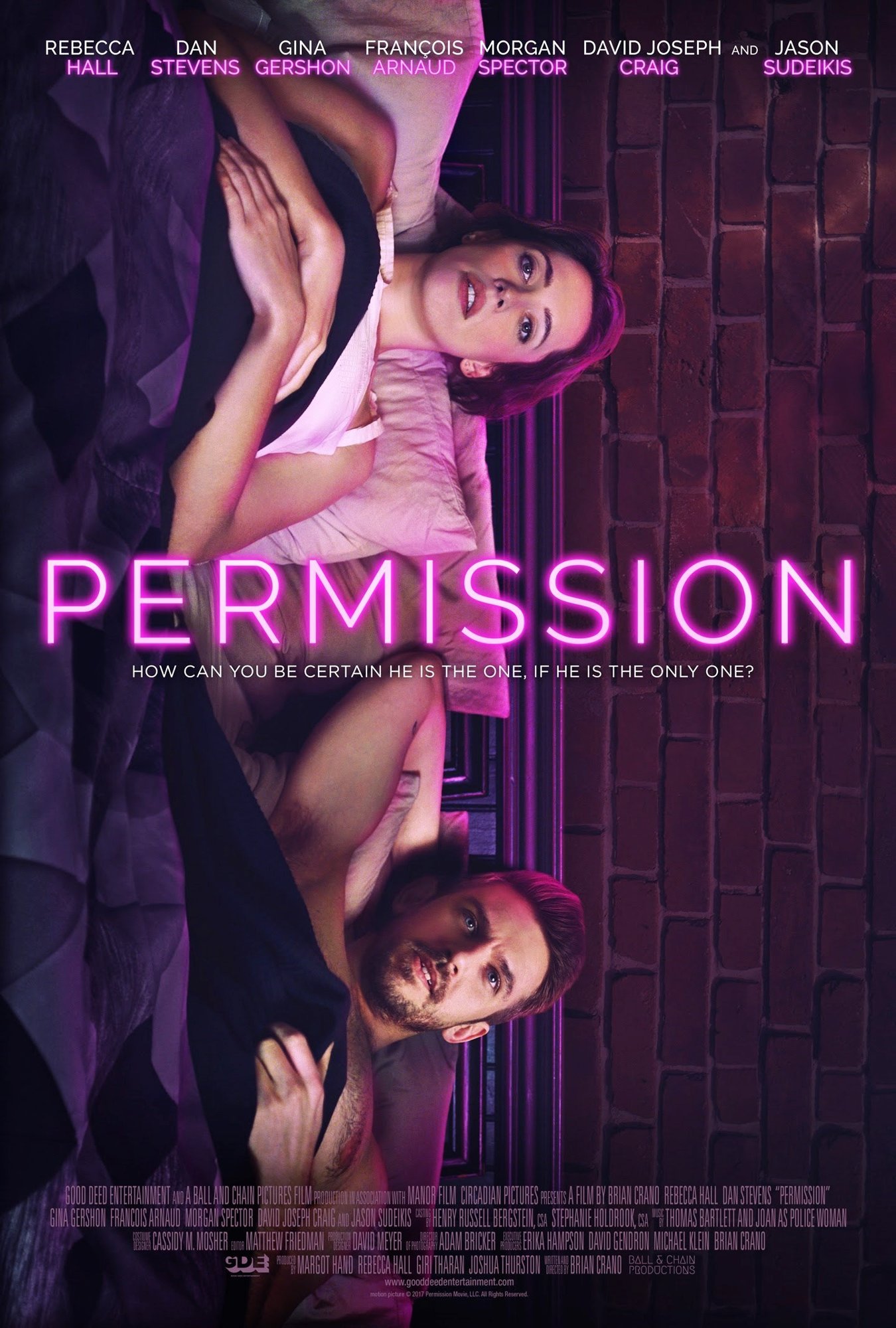 Anna (Rebecca Hall) and Will (Dan Stevens) have been going out for so long that marriage seems inevitable. But after a dinner with two of their best friends in the whole wide world, the two get to thinking: Shouldn’t they try it out with other people and see if they like it, therefore, making their relationship not as indestructible as they originally thought? It’s a weird question they come to, but ultimately, they decide that they are for it and both strike up something of small, yet slightly meaningful relationships to test things out. Anna has a fling with Dane (François Arnaud), a musician who is surprisingly very open to whatever she oh so desires, whereas Will has a small fling with Lydia (Gina Gershon), an older woman who prefers sex to actual dating. The two seem to be fine with one another when they’re together, but separated, are Anna and Will really as fine as they let on?

If anything, Permission is a lot better than that other movie about a destructive relationship between two possibly challenging people, otherwise known as Fifty Shades Freed. But in all honesty, it’s just marginally better because it actually seems to be about real, honest and understanding people, dealing with something relating to actual issues with love and sex, and not cardboard cut-outs of what we think human beings think, talk and act like when in a sexually-rough relationship. That isn’t to say it’s bad, really, but compared, it’s better.

So yeah, if you’re going to see one of the two, choose Permission.

That’s not the most winning recommendation of all, but it shows that you can take a pretty ordinary premise, spin it around a bit, give it some fun, punchy dialogue, add in a few likable presences, and yeah, it can kind of work. Permission is the kind of rom-com that asks the hard questions, without ever going too far or too centered in one direction, as to forget that this is really about two people having sex, finding love, and looking freakin’ beautiful while doing it. In that sense, it’s a harmless affair that has a bunch of cussing, sex, and male full-frontal nudity, but really, it’s a date movie for any and all people that set their sights on it, because it never gets as meaningful or deep as it think it is.

Which is why writer/director Brian Cano, given all that he does set-out to do here, still ends up making a conventional rom-com. It’s a shame, too, because there are some interesting tidbits of insight that we get to chew on – like about how one partner in a relationship can want to get serious way too quickly and the other not – but really, it all comes down to people talking about having sex, having it, and then talking about when they’re going to have it again. There are fights and some discussions about where to go next, but they don’t ever quite go anywhere.

They sort of just pad-out an already simple story that we’ve seen done a million times before.

But then again, with this cast, it’s hard to be annoyed. Cause yeah, when you have the likes of Rebecca Hall, Dan Stevens, Gina Gershon, and Jason Sudeikis around, the times can’t be all that bad, really. And they all do great jobs; you sort of get the sense mostly everybody signed-up because they were all friends and wanted to just make a very small, very intimate movie for the sake of doing so, but it all ends up working out. Everybody has a good time, everyone goes home happy, and yeah, everyone feels better about themselves because they’re at least a little bit more important than whatever mainstream franchise is trying to take over the rom-com genre next.

Consensus: With a talented ensemble and some fun dialogue, Permission goes into some more interesting directions than your standard rom-com, until it ends up becoming just about the same thing.