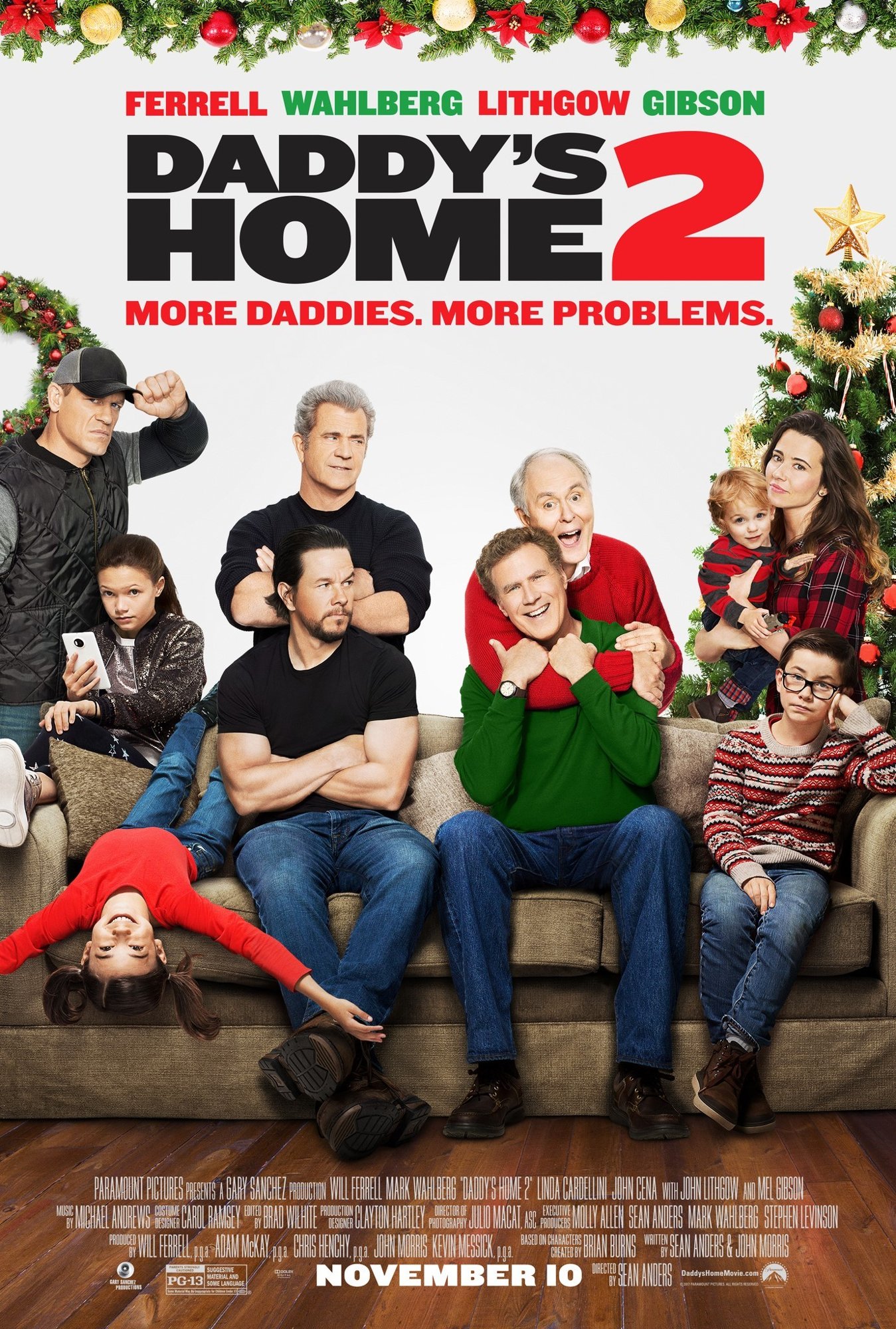 Holidays suck as is. So bring on the dead-beat dads!

Finally, Dusty (Mark Wahlberg) and Brad (Will Ferrell) have found a way to co-parent in perfect peace and harmony together, which means that everything will be a whole heck of a lot more simpler and joyful around the households, right? Well, with the holidays coming up and the usual craziness that occurs around that time, it’s going to be a bit of an issue, especially what with both of their dads coming home for the holidays. For Brad, that’s good news as he and his dad, Don (John Lithgow), are best friends and know everything about one another, whereas for Dusty, his father, Kurt (Mel Gibson), was a bit absent throughout his childhood and has, in a way, scarred him for life. How will the two separate families get along? Better yet, how will anybody get any present-shopping done with all of this drama going on?

To be honest, the original Daddy’s Home was aimless. Sure, it wasn’t nearly as funny as you would have hoped with the likes of Wahlberg and Ferrell together again, but it was still enjoyable enough, with more than a few jokes of theirs hitting their marks. But still, it was a typical mainstream comedy, made for the family, released around the holidays, and desperately trying to appeal to everyone and not really maintaining much of an identity, making it a disappointment, overall.

Which is why I was probably not looking forward to a sequel, but you know what? I’ve got it and I’m not too upset about it.

For one, Daddy’s Home 2 is the perfect example of what happens when you have some awfully talented people in your film, giving it their absolute all. Ferrell and Wahlberg are, as usual, having fun and doing all that they can, but it’s really Lithgow and, as much as I hate to say it, Gibson who really the steal the shows. Lithgow is great as this uptight and awfully nerdy father who slowly, but surely, begins to come out of his shell and make us notice a darker person, whereas with Gibson, he’s so damn charming that even when he’s being a total and complete dick, you can’t help but smile and laugh with him.

Both are clearly types, as well as everybody else in the film is, but what really works is how they actually seem to care for the material and aren’t necessarily slumming. Ferrell is doing his usual bit of playing an over-eager father, but playing-off of Lithgow gives him some great and funny moments, whereas with Wahlberg, who is playing it deadpan again, gets some solid little laughs with Gibson. They’re not really ground-breaking laughs, but they’re more than enough to make up for the fact that the movie doesn’t always have the best thing to say, do, or really get across as a “family message”.

That said, holiday films can typically be nauseating and terrible, which made me appreciate Daddy’s Home 2 just a tad bit more. Call it a guilty pleasure of mine, or call this just a case of me getting softer in my older age, but whatever it is, Daddy’s Home 2 wasn’t the worst thing I’ve ever seen.

It wasn’t great, either, but hey, what else could you ask for?

Consensus: Given the cast and crew, you’d expect a masterpiece, but for the most part, Daddy’s Home 2 is a ridiculously fare and middling holiday-comedy that gets by solely on the charms of its ever-charming ensemble, most of whom actually seem to be trying with very limited material at their disposal.