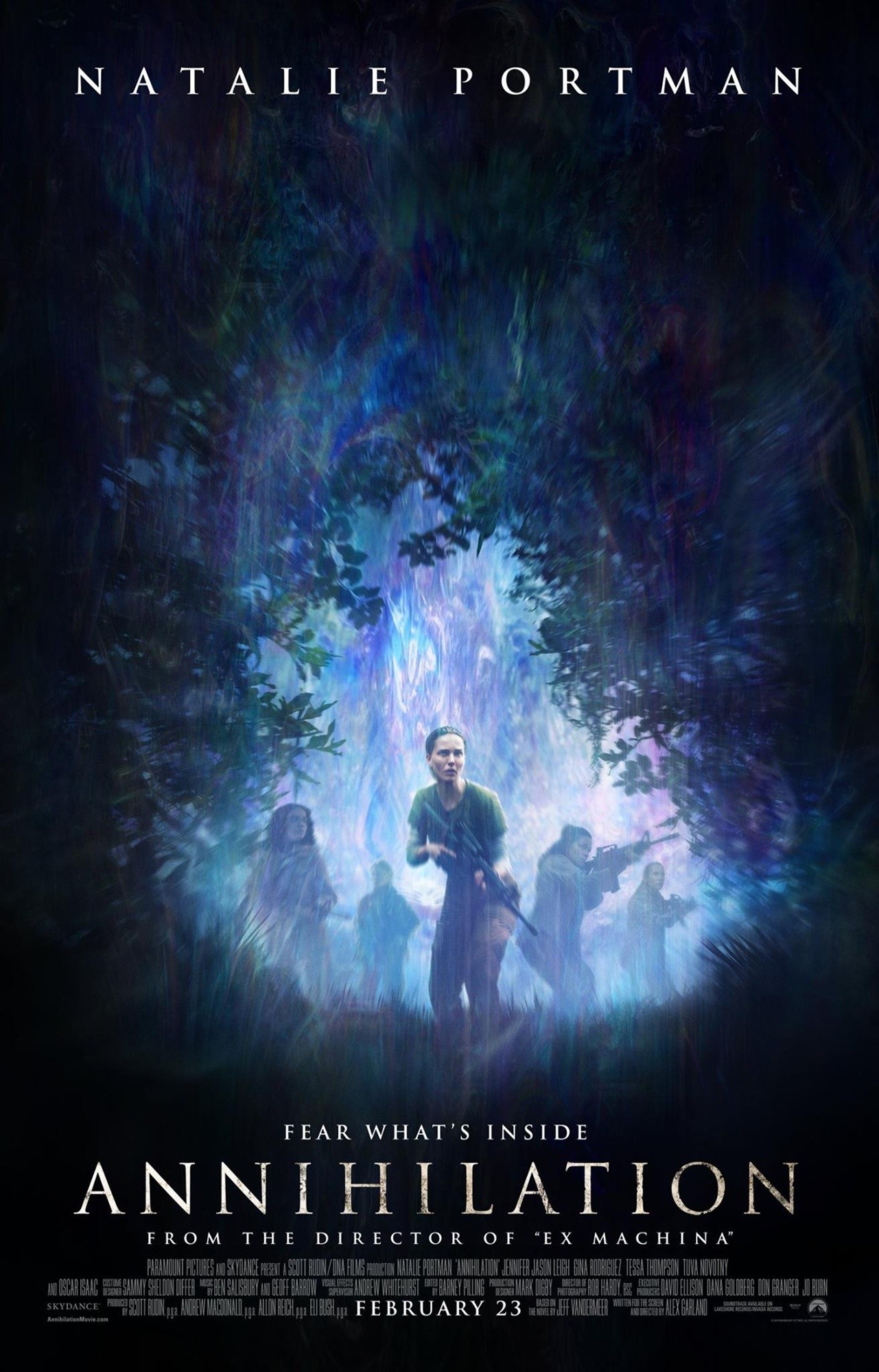 With the way this world’s turning out, I wouldn’t mind an alternate one.

Lena (Natalie Portman), a soldier-turned-biologist, has been dealing with the disappearance of her husband (Oscar Isaac) for over a year now and she thinks that it may be time to finally move on. But just as soon as she does, he returns, acting very strange and not really answering just where he’s been, what he’s been up to, and why he never got back to her in a whole year. Then, he begins to bleed and his organs shut down and the next thing she knows, Lena wakes up in a government facility, being asked questions about her husband and just how much she knows of what he told her. What she should know is that there’s a this scary quarantined zone called “The Shimmer,” and it’s been around for nearly three years and no one’s been able to come back from it. What lies within it? Better yet, what the hell is it? Well, Lena decides that it’s her task to figure it all out and with a fellow group of other ladies, she thinks she may find the answers.

Annihilation is the kind of movie that feels like it’s almost too odd to have been made with this cast, crew, and this kind of money. That’s why it’s probably no shock that Netflix bought up the international rights immediately, feeling as if it’s the kind of sci-fi flick that’s easy-to-sell, but very hard to actually get people to see because, well, it’s weird. Which isn’t a bad thing – in fact, quite the opposite. We need more weird and crazy sci-fi movies like Annihilation, where we actually don’t know what’s going to happen next, because the writer/director behind it has set so much up, without really letting us in on what’s to come.

For instance, a lot of sci-fi revolves around crazy monsters, aliens, or robots trying to take over the world and leaving it at that. In a way, Annihilation flirts with that idea, until it doesn’t and it’s what makes the movie all the more compelling to sit and watch, but also, the more intriguing to think about many days after (which is something that I have been doing, obviously). It’s the kind of sci-fi flick that, I’ll reiterate, rarely gets made with this much backing behind it, but it’s here, it’s pretty great, and yeah, we should all appreciate it.

And most of all, we should appreciate that someone like Alex Garland isn’t afraid to go the distance, either.

Annihilation is a slow-burn for sure, but it’s meant to be; the adventure itself seems so tense from the very beginning that literally anything thrown at us, whether it be scary or not, is already going to be exciting. The only issue is that Annihilation and I guess Garland himself run into the issue of falling into the same traps that most sci-fi flicks do. For example, and without saying too much, there’s always one or two characters in these kinds of movies who have to be nonbelievers, always starting issues, and eventually, lose their sense of composure. That character exists here and it’s pretty easy to point that person out from the get-go, which is why when it actually happens, it’s disappointing – it feels like Garland’s falling on typical conventions that we don’t really need because, well, everything’s already pretty tense.

That said, it’s pretty great to see a movie, sci-fi or not, get these many female characters and actually have them do something for once. But better yet, they actually have interesting backstories behind them to make the trip more involving; Portman’s Lena we get to know tons about, but others like Jennifer Jason Leigh, Tessa Thompson, Gina Rodriguez, and Tuva Novotny all have a little something to say and give us a reason to not just care, but even relate. It helps us grow closer to whatever the hell happens next and even realize that they’re humans, navigating through a pretty crazy landscape.

Oh, and they also happen to be really smart, really bad-ass women, too.

Consensus: Oddly compelling and challenging, Annihilation is not your typical sci-fi blockbuster, and for the better.