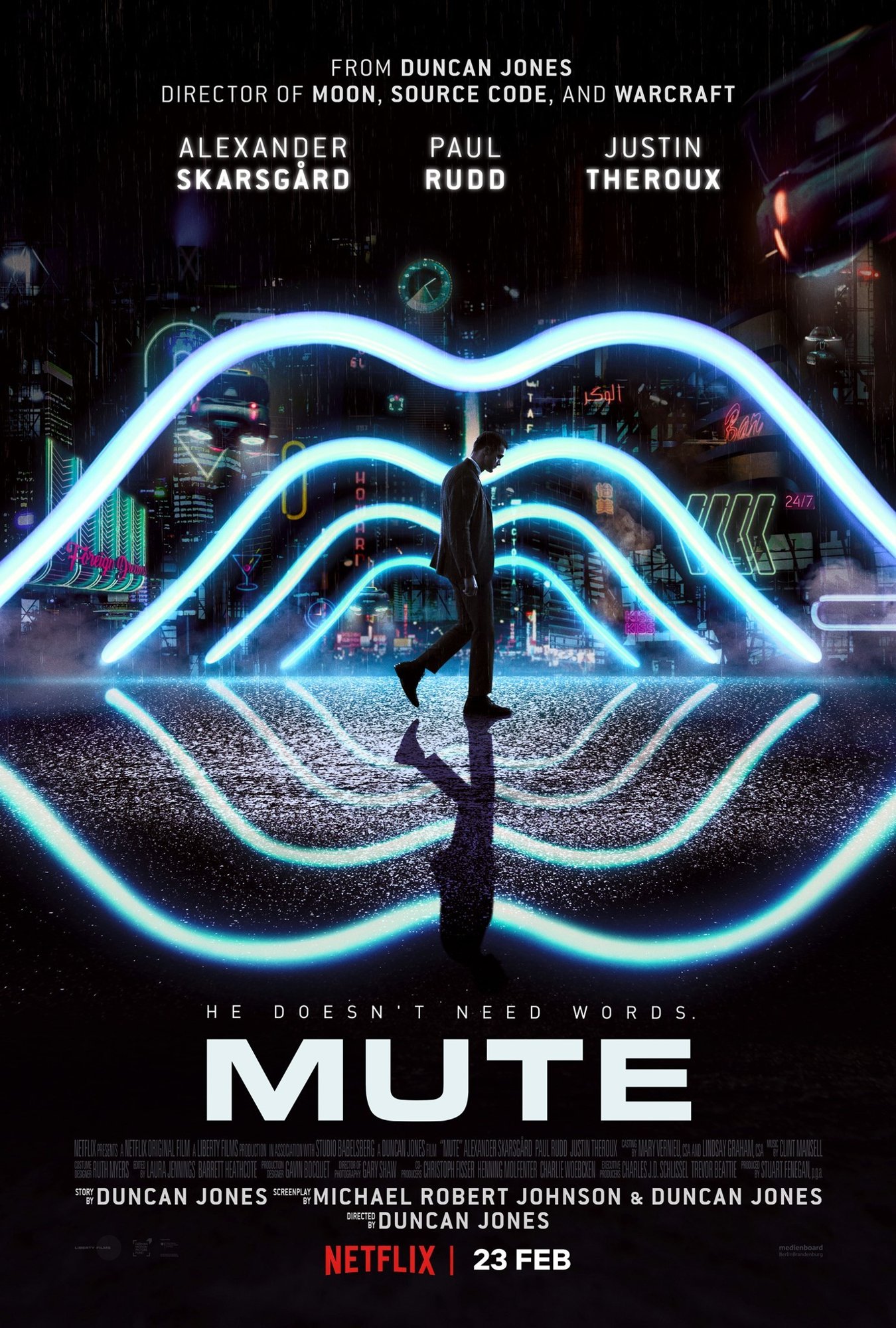 Return of the steampunk.

In the near-future, Berlin is full of all sorts of colorful and wacky characters. One such is a mute bartender by the name of Leo (Alexander Skarsgård) who falls in love with the girl of his dreams (Seyneb Saleh). Only issue is that she winds up missing and Leo, without much of anything else to live for in this world, takes it upon himself to look everywhere he can, far and wide, for her and take down whoever stands in his way. And in this dark and seedy underworld full of criminals and predators, Leo meets a lot of dangerous people. Two, in fact, are Cactus Bill (Paul Rudd) and Duck (Justin Theroux), American surgeons who are working underground for the Russian mob and other shady characters. The two have been good buddies for quite some time and get by doing what they do, however, they may have a thing or two to do with this disappearance and it’s why their paths with Leo may just cross a lot sooner than they expect.

After Warcraft, you’d think that Duncan Jones would have gotten his one, big mainstream flick out of his system and he could go back to his more low-key days like with Moon (not literally, even though that’s apparently the case here). But for some reason, as much as it feels like he’s really throwing all of his creativity and originality at the wall, seeing what sticks, and not worried about making movies for everyone on the face of the planet, Mute just doesn’t totally work. It’s too weird, too disjointed, too off-putting, and in a weird way, too dull.

Except for everything involving Rudd and Theroux. In fact, had Mute just been about these two characters – these awful, rather mean-spirited guys who we, for some reason, grow to know and like a little bit more as time goes around – feel like the perfect two-handers to help us navigate throughout this dark and crazy world. You can also tell they are where Jones puts most of his effort into, with giving each one a personality and a reason for us to even care for them, even if they are terrible human beings. Not to mention, the movie has a sickly humorous tone that doesn’t always work, but with them two, it somehow does.

Oh, and it also helps that Theroux and Rudd are great here.

Together, they genuinely seem to enjoy working with one another and the darker tendencies to these characters, in some way, take on a much more lighter feel. We’re supposed to enjoy their company, but also hate them no matter what, but because the two are so likable and charming, it’s hard to fully dismiss them as awful people. There’s this idea that their souls be cleaned and they could make anew and once again, it shows that there was some thought and ambition with them.

It’s just a shame that it wasn’t in the rest of the movie. That is, of course, excluding the look of this movie, which is lovely, bright, and bubbly, and proves that Jones has an eye for detail. But in a way, we’ve sort of seen it all before, especially with Blade Runner 2049 and Altered Carbon, Netflix’s new series, showing us a world where technology has run amok and everything has lost all excessive control. You can sort of get the sense that maybe Jones is trying to say something here, but really, he steps away and just focuses more and more on Skarsgård and his quest to find his long, lost love.

Oh, and speaking of which, yeah, he totally drags the movie down.

Sure, I get that we absolutely need this character, but for some reason, Jones doesn’t seem all that interested in really developing him. We get that he’s the sweet, softer-type, who also isn’t afraid to kick a little ass, which makes him a perfect fit for Skarsgård, but for some reason, the character just feels boring. Had this been his own movie, without the supporting-turns from Theroux and Rudd, it would have been perfectly fine, but you put their loud abrasiveness with his literal silence, and yeah, it just doesn’t mesh well together. You can get past it a bit and try to focus on the best of within, but really, Mute doesn’t have a whole lot to do, or say.

It’s just Theroux and Rudd, baby. And that’s all there is to it.

Consensus: While beautiful and ambitious, Mute is also a bit of a mess, never settling on a tone, but always allowing for Theroux and Rudd to have the time of their lives.