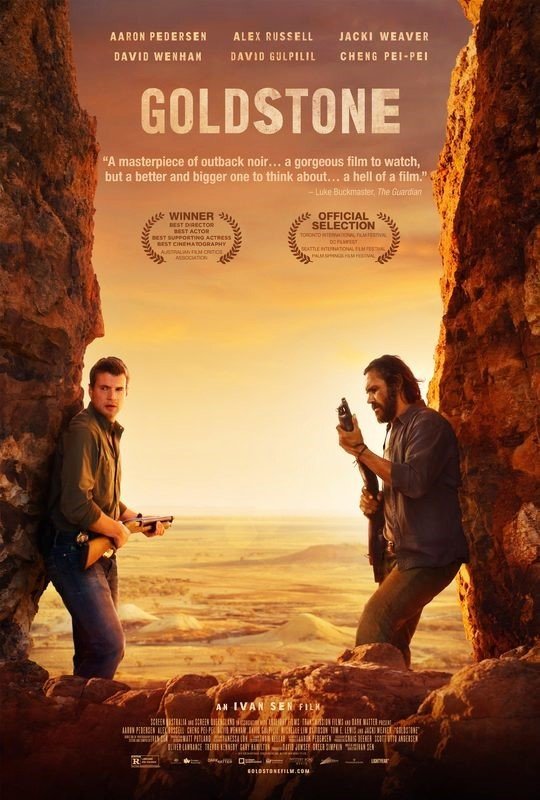 The Outback’s a lovely place to die.

Indigenous detective Jay Swan (Aaron Pederson) arrives in the town of Goldstone to search for a missing person and it’s not the easiest task imaginable. For one, he’s doing this all sort of on his own and without much of a helping-hand from his fellow co-workers, nor does he receive the best reception when he starts snooping around this small and relatively quaint town. But why? Well, for one, Goldstone has some weird secrets and lies that need to be uncovered, but without any help, Jay’s just stuck in one spot, without anywhere to really go. Enter Josh (Alex Russell), a local cop who starts to question his own surroundings and what the land he stands on is all about and where it came from. He also starts to wonder about those around him and who he’s able to trust, or not.

Goldstone feels a lot like an early Peter Weir-thriller, but without all of the weird and crazy parts. It’s the kind of movie that promises a big pay-off for all of the mystery, foreboding, and twists and turns, but in reality, is just a typical thriller about small towns, their racism, their lies, their secrets, and how they’re all a little ugly when you get a closer look at them. Being set in the sweaty hot Outback is at least refreshing (not literally), but still, for all of the promise, the movie ends exactly where you think it would, how, and with the people you’d expect to see.

But it’s not a failure by any means. Just mediocre.

Still, writer/director Ivan Sen is great at creating and setting mood and it’s what keeps Goldstone interesting. It’s hard to watch this movie and not think of Wind River, in that it’s a small-town thriller, about a secluded part of society, that deals with rape, murder and above all else, colonization. But whereas that movie seemed to have something interesting to say about racism, bigotry, and the way the white man treats its natives, Goldstone doesn’t have much of a brain on its mind – sometimes it’s about Jay receiving the cold shoulder because of his race, but mostly, it all comes back to him just being an out-of-town cop and nobody likes him.

So yeah, maybe it’s not racism. Or maybe it is. I’m not sure. But what I am sure of is that as Jay, Aaron Pederson does a solid job of never totally cluing us in on what this man’s thinking, or what he’s going to do next. And that’s a little dangerous for a protagonist in any movie, especially if we don’t entirely know what’s going on right away, what he’s searching for, or why we’re being told this story in the first place. Pederson gets a lot done without saying much at all and it’s why we need to see more characters like him. Same goes for Jacki Weaver as, guess this, a villainous older woman with the kind of cold-hearted stare that could make a grown man cry and run for his life.

Never get enough of her and what she does.

Consensus: Well-acted and a little tense, Goldstone is still a typical procedural, that’s helped out because of its style and setting, but leaves a lot to be desired in the story itself.