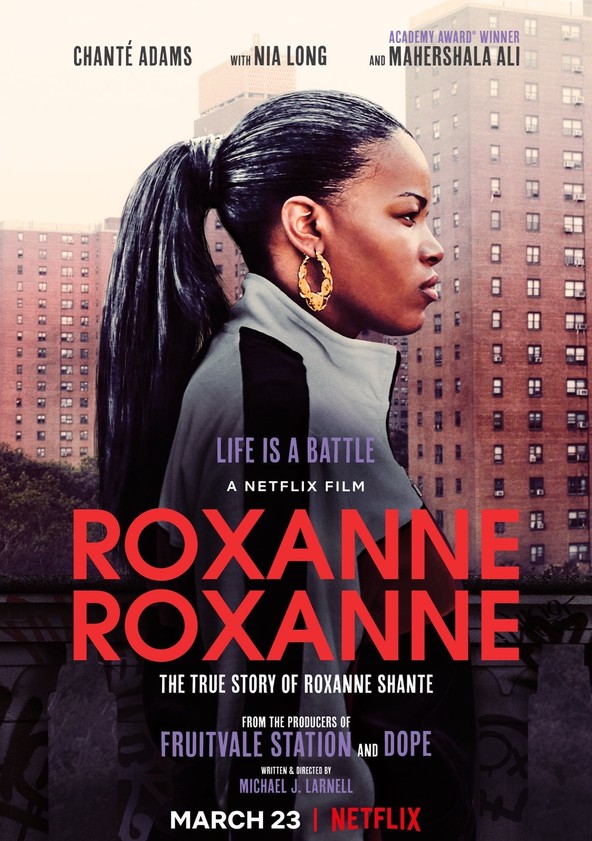 The good old days of diss tracks not being all that hurtful.

Back in the early-’80s, hip-hop wasn’t quite the juggernaut in the music industry that it’s become today. It was most definitely a boys club, in which concerts and battles were handled in back alleyways, or small bingo halls. Obviously, times have changed and well, so have the rappers. But leading the charge for all of the female MC’s in the game was a little lady from Queensbridge, going by the name of Roxanne Shanté (Chanté Adams). At only 14, she was well-known on the streets for her slick rhymes and ways of beating any foe in a rap-battle and automatically, she receives notice from some interested parties. She records a record and it becomes a huge underground success, leading her to concerts and fame, however, with very little money. Which is obviously a problem, considering that she’s got a husband (Mahershala Ali) and baby to support, while also still finding enough to give back to her sisters and mother (Nia Long).

While I’m glad a movie like Roxanne, Roxanne exists, I sort of wish it was better. It’s a movie about the golden age of hip-hop, before that was ever really a thing, that’s also about one of the very first female rappers to break ground. But at the same time, it’s not necessarily a musical biopic, as much as it’s a coming-of-ager, that just so happens to be about a female pioneer in the world of hip-hop. So yeah, it’s got a lot more to it than you would expect and that, above anything else, deserves to be noticed.

But once again, it’s just not all that good.

For some odd reason, writer/director Michael Larnell never really allows for the material to get off the ground. Having a coming-of-ager about a young, ambitious girl growing up in the broken projects of NYC during the 80’s, isn’t necessarily original, but the music-angle behind Roxanne, Roxanne is and it should have helped a movie like this branch out beyond the familiarity, but it doesn’t. Instead, Larnell hits on just about every cliche and convention you’d expect from a coming-of-ager and it almost feels like he may not be trying to do much with the music itself; the very few performances we get of music being performed live, or even the rap-battles themselves are, quite frankly, lame and amateurish.

A movie like 8 Mile is obviously a comparison, because it not only utilized its musical-moments to heighten the drama, but everything else between it worked because it felt raw, gritty, fresh, and above all else, original, even if it wasn’t. Roxanne, Roxanne is the kind of movie that starts to repeat itself, time and time again, to where it feels like it would have worked better as a short, or better yet, even as a documentary from the subject herself. Having a full-length, feature-flick about this subject’s life is, honestly, a little too much and you can tell.

Not that Roxanne herself doesn’t deserve a movie to be made about her, but perhaps it’s just not this one. That said, as Roxanne Shanté, relative newcomer Chanté Adams isn’t just a dead ringer for the real person herself, but also taps into the kind of raw energy that this movie so desperately needed. Her Roxanne is a young and immature girl, but she’s also smart and sassy enough to where you can see her taking care of herself, but also never really knowing what’s going to come next, just as you would expect from a kid her age. She feels like a real kid, stuck in a world that doesn’t know what to do with her except, well, exploit her for all that she’s worth, take her money, and leave her high and dry.

Thankfully, it didn’t quite happen, so at least this one has something of a happy story.

Consensus: Despite it being a different take on the musical biopic, Roxanne, Roxanne is also a rather slow, meandering affair that serves as a coming-of-ager, without any real insight to make it interesting and rise above similar movies.