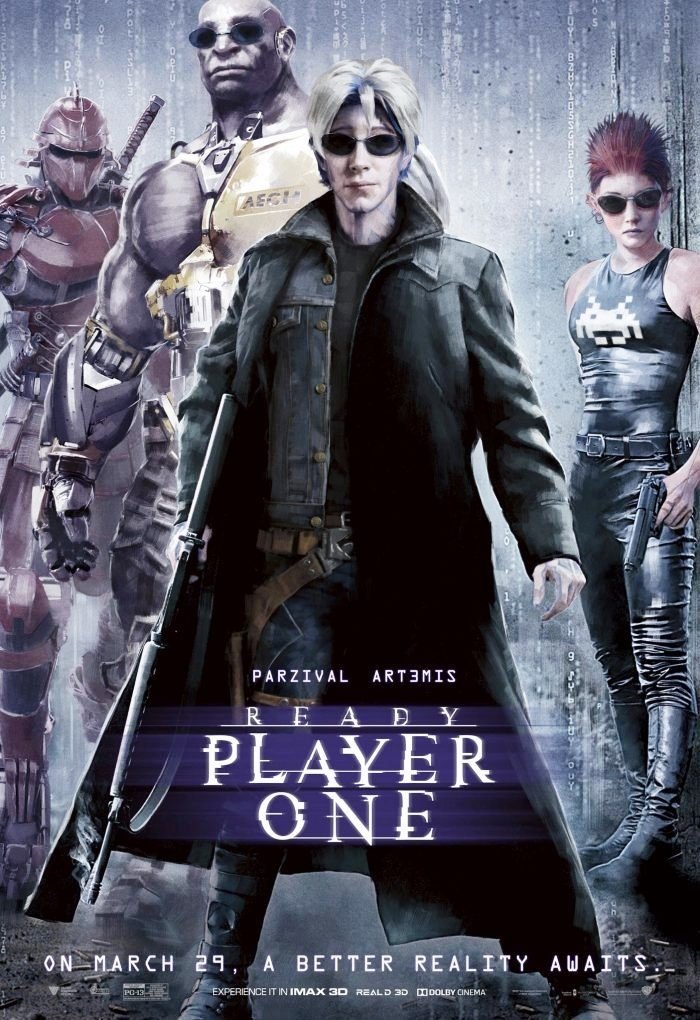 It’s the year 2044 and literally everyone is stuck inside, on their VR-sets, playing and exploring the game they call “Oasis”. It’s a beautifully detailed and exciting VR-world filled with races, games, mazes, and all sorts of other goodies where people can actually get real money, so long as they stay ahead of the competition. There’s also this end-goal made by the creator (Mark Rylance) in that whoever defeats the game, will be given the keys to the game and are able to do with it whatever they want to do with it. One such person who thinks that he has all of the clues and knowledge to conquer such a quest is Wade Watts (Tye Sheridan), a young orphan living with his trashy aunt and her boyfriend. Wade spends most of his time trying to do whatever he can to win, mission after mission, garnering new and loyal fellow gamers to be on his side, and more importantly, conquering the Oasis once and for all. But standing on the opposing side of him is corporate exec Nolan Sorrento (Ben Mendelsohn), who wants nothing more than to take over the game and make it to his liking, complete with ads and software issues galore.

Ready Player One is literally 140-minutes of somebody else playing a video-game that you desperately want to play and looks like it in just about every single second. It’s big, bold, bright, beautiful, and so wonderfully detailed that it not only looks like you’re seeing a video-game brought to the big-screen, but one that’s constantly inventing itself as it goes along and without any faltering to be found. And it somehow all works because even though the movie is literally nearly two-hours of glitzy CGI and special-effects, Steven Spielberg is such a master at his craft that, by now, he can’t make a bad movie.

Seriously. Not even if he tried.

And for awhile, it seemed like he was about to here with Ready Player One. For one, the source-material itself is that kind of fanboy-pandering that loves to sprout references to Joust in one sentence, Back to the Future in the next, and do whatever it can to try and throw Van Halen in there for short measure, yet, never fully comes together as a heartfelt, meaningful love letter to pop-culture as a whole. In a way, it’s overload beyond belief and it’s why so many can look at the book as not the way to appreciate popular cultural, or even video-games as a whole. And with the film adaptation, you sort of get that feeling very early one, where Spielberg seems fine with the references being thrown out and not really meaning much.

But that all changes about halfway through once we realize that there’s not only something of a beautifully ambitious story at the center, but also a heartfelt one that feels like the love-letter to pop-culture the book was never able to be. A part of me likes to chalk that up to the script done by Zak Penn and Ernest Cline, but also to Spielberg who still feels like he’s approaching this material with the child-like wonder and excitement that’s been so prominent in his career, even during the weirder, darker movies of his career. He never seems to settle himself down with this material and it’s a wonderful sight to behold, as well as an enjoyable mood to be around, because no one does a fun set-piece like Spielberg, nor does anyone really know how to keep a sense of genuine love and adoration alive quite like him, either.

Basically, Spielberg is a master at his craft and even at 72 years of age, the man shows no signs of slowing down.

And yes, if Ready Player One is any sure sign of what we can expect from the next many years of Spielberg’s career, then I’m glad to be around for it. It’s the kind of major motion-picture blockbuster that cost a lot of money and shows every nickel and dime on the screen, yet, doesn’t forget about the story, the characters, or basically everything else that works and matters. It’s cheesy and awfully sentimental, sure, but it’s typical Spielberg fashion in that we get lots of high-flying action, humor, heart, romance, solid performances from an incredibly stacked ensemble, and oh yeah, some smart in-jokes that those paying attention to at home, will be happy to be rewarded with. If only every movie was like that.

Or better yet, if only every director was like Spielberg. Maybe not every studio blockbuster would be such a general bummer.

Consensus: As bold and as ambitious as you’d expect from Spielberg, Ready Player One is a glamorously detailed and exciting journey into pop and game-culture as a whole that feels a little smarmy, but nevertheless, still genuine.