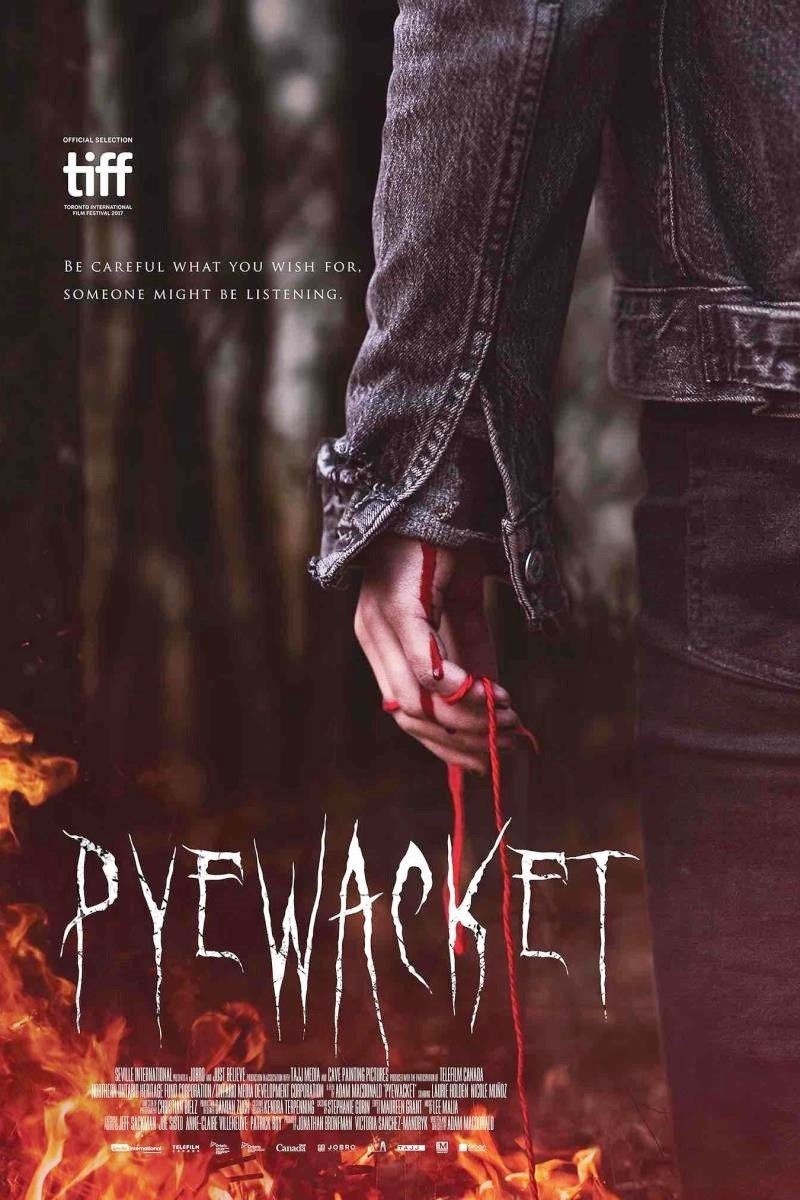 No true connection like that between a mother and a daughter.

Leah (Nicole Muñoz) is a teenager which, as we all know, means that she’s going through a bit of a rough time. She hangs with the weird crowd at school, listens to hardcore metal, worships the devil, constantly wears black, and is filled with so much angst and confusion that sometimes, she has a hard time getting it all out. To top all of that off, her father dies, leaving her and her mother (Laurie Holden) left to fend for themselves. And yeah, they aren’t doing so well. Leah’s finding support through her friends, but her mother is getting more and more depressed as the days go by, which makes her and Leah fight and argue a whole lot more. Then, it turns out that Leah has to move and is forced to leave her old life behind – something little Leah doesn’t want to do. So, as any thoughtful teen would do, she puts a hex on her mother, not expecting much of anything to happen, until well, it does.

Pyewacket is one of those horror movies that’s less about the shocks, the chills, and the scares, as much as it’s more about the psychological tension brimming in the air throughout. These are usually my favorite kind of horror flicks because while I do appreciate ghosts, goblins, ghouls, and all those other kinds of monsters, there’s nothing like being transported back into the real world, where awfully terrible things happen to real people, just like you or me. And for awhile, it seems like that’s exactly the kind of point Pyewacket and writer/director Adam MacDonald are going for; keep the scares based somewhat in reality, focus on the characters, the relationships, and everything else will eventually come together.

If anything, Pyewacket feels like MacDonald had another draft or two to go through. Wherein he keeps his direction small and subdued, the writing itself is a little cheesy and, at times, bordering on parody. Even though it’s barely 90-minutes, a solid half of the movie is spent listening to the mother and daughter bicker and batter with one another, almost to the point of where it feels like MacDonald is just repeating himself and doesn’t know where to go from here. And normally, this wouldn’t be a problem, but because these characters are such types – the young, angst-ridden teen and the sort of crazy, depressed mother – listening to them scream, shout, and let it all out, isn’t just boring, but it’s downright tiresome.

It makes you long for the scenes where it’s just Leah hanging with her friends, looking for some peace and quiet while listening to death metal, but even these scenes are a little cheesy. Granted, these characters around her are at least more interesting than expected because they aren’t written to be Satan-worshiping nut-jobs, but there’s still not much else to them, either. They’re just boring teens, who talk and do stuff like boring teens.

But none of it’s really interesting and it goes on like this for quite some time.

The only real positive element surrounding Pyewacket is the last 15 minutes where, finally, it seems like MacDonald has gotten his act together, throws all of the scares at the wall, see what sticks, and keeps on going with it. It’s where all of the raw emotions and general craziness comes together and there’s some true horror on-display. The only issue is that it comes into play way late and so out-of-nowhere, that it feels like a whole different movie entirely. Rather than getting a screaming and shouting daughter and mother, we get something resembling a demon and yeah, it just doesn’t work. MacDonald at least tries, so maybe there’s some respect to be thrown his way, but it’s also a swing and a miss.

Maybe better luck next time? I’m not entirely sure.

Consensus: Even though it shows early promise as being something different from standard horror-fare, Pyewacket ultimately becomes a formulaic, lazily-written, and rather boring psychological-take on death and family. I think.