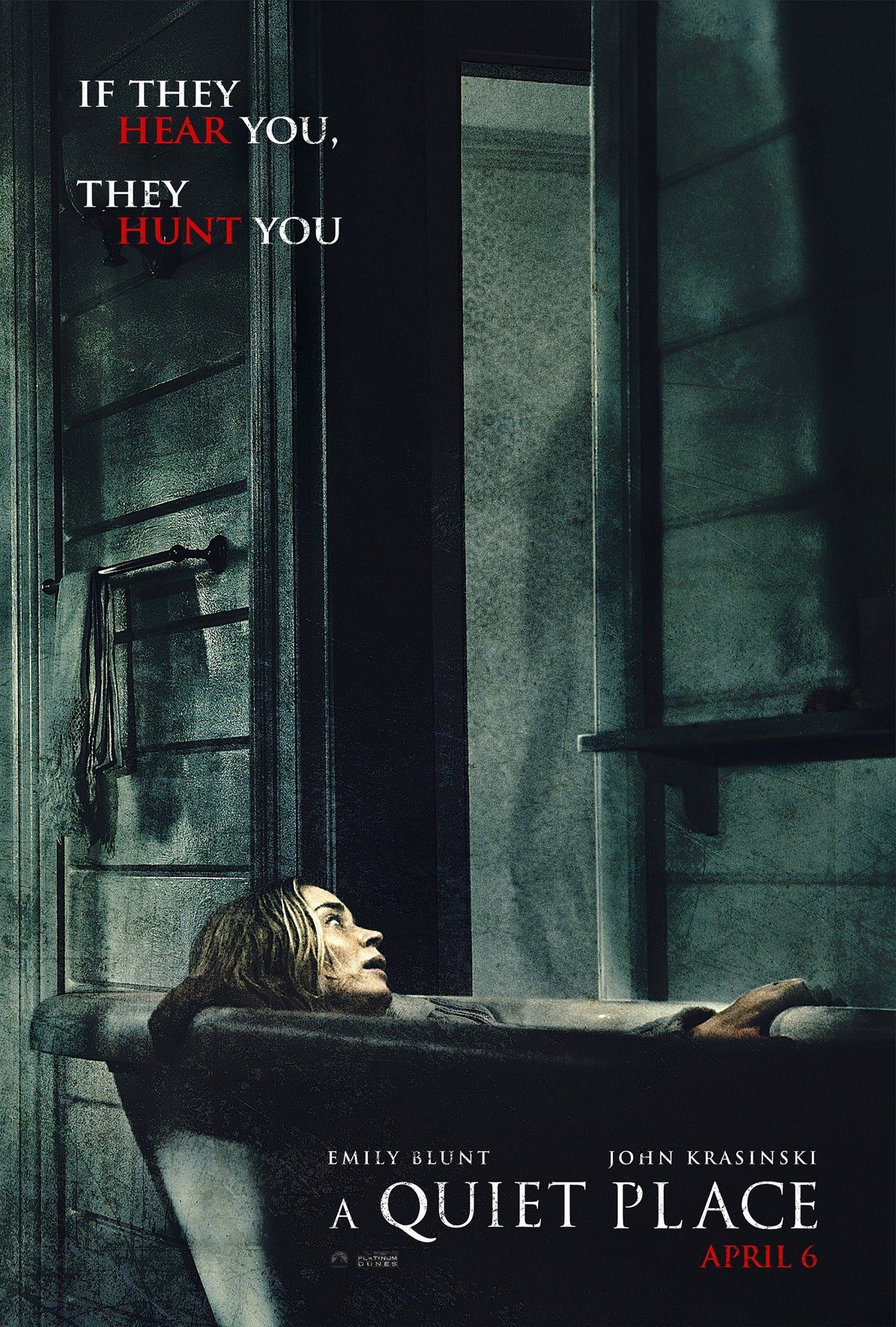 Who knew that the movie theaters could be such a quiet place?

It’s the near-future and something awfully bad has happened. From what it seems, half of mankind has been wiped-out with only a few stragglers left to roam about the world as quiet as they can be. Why? Well, there seems to be something out there amongst the wilderness that doesn’t take too kindly to sound and it’s why a little family-unit has been doing their best to get by and survive. There’s Evelyn (Emily Blunt), the mommy of the group who is also carrying another child into this world; there’s Lee (John Krasinski), the daddy of the group who is just trying to keep his family safe in any way that he can; there’s Regan (Millicent Simmonds), the daughter of the group who is also deaf and having to deal with a tragedy that she may have caused recently; and lastly, there’s Marcus (Noah Jupe), the youngest son who’s being groomed to take over and protect the family, even if he doesn’t feel that he’s totally up for it. But in this world, everyone has to be.

A Quiet Place is the kind of horror movie that’s packed with so much tension, so much dread, so much horror, and so much excitement, that it’s hard to fully put it all into words as to why it’s so great. It’s a horror movie that also works as something of a silent-film, where every sound that we hear is calculated and every bit of the design, look, and feel, needs to be top-notch, because if all we’re watching is a bunch of people going from one setting to another, without hardly saying anything, you need to give us a lot to look at. But also feel. And also be entranced by.

And A Quiet Place has that in spades.

Which is crazy considering that this is coming from John Krasinski, having his third go as director here and needless to say, it’s not just a total 180 from what we’re used to seeing from him, but an insanely impressive step in the right direction. While you’d expect a movie so drab, so dark, and so serious as this to be some sort of “point” that Krasinski himself is making to be taken much more seriously by cinephiles and movie-goers alike, he proves himself to be quite capable of building tension and never seeming to take any shortcuts, either. Krasinski seems like he came into this material, knowing every shot he was going to do and while there’s maybe a one scene I’d take out of this whole thing, he’s got a near-perfect movie.

And better yet, a near-perfect horror flick, which isn’t all that common nowadays. Sure, we had Get Out last year and Don’t Breathe the year before, but hardly do we get horror flicks, or better yet, monster-features, where we’re actually on-edge, not knowing what to expect next, but always predicting the worst, and never feeling as if you’re safe. Even in the smaller, much more intimate moments where Krasinski is just building characters and their relations to one another, we still get the sense that all of the soft and cuddly times won’t last and it won’t be long until someone drops something, or someone and calls up whatever wild monster is out there grabbing humans.

Which I know sounds corny, but it all works. Trust me.

It’s the kind of movie where, for me at least, the tension continued to build and build, almost until the point of where it became too much to handle. Some will look at this flick and think of it as just another small, yet effective horror flick and leave it at that along with their popcorn, but it’s truly an exercise in genre film-making that we don’t get a whole lot of. It knows its audience, it knows what it’s doing, and it’s not making itself up as it goes along – it’s going to be a scary, unpredictable and ultimately rewarding horror-flick that you’ll want to get away from as soon as it’s over and the lights are finally on.

Once again, it’s dangerous and that’s what we need more of. Damn you, John Krasinski.

Consensus: Small, tender and subtle, yet, packed with so much tension, horror, excitement, and chills, that A Quiet Place reminds you the kind of strength scary movies can have when done right and effectively and may also have you think twice about the skills of John Krasinski.