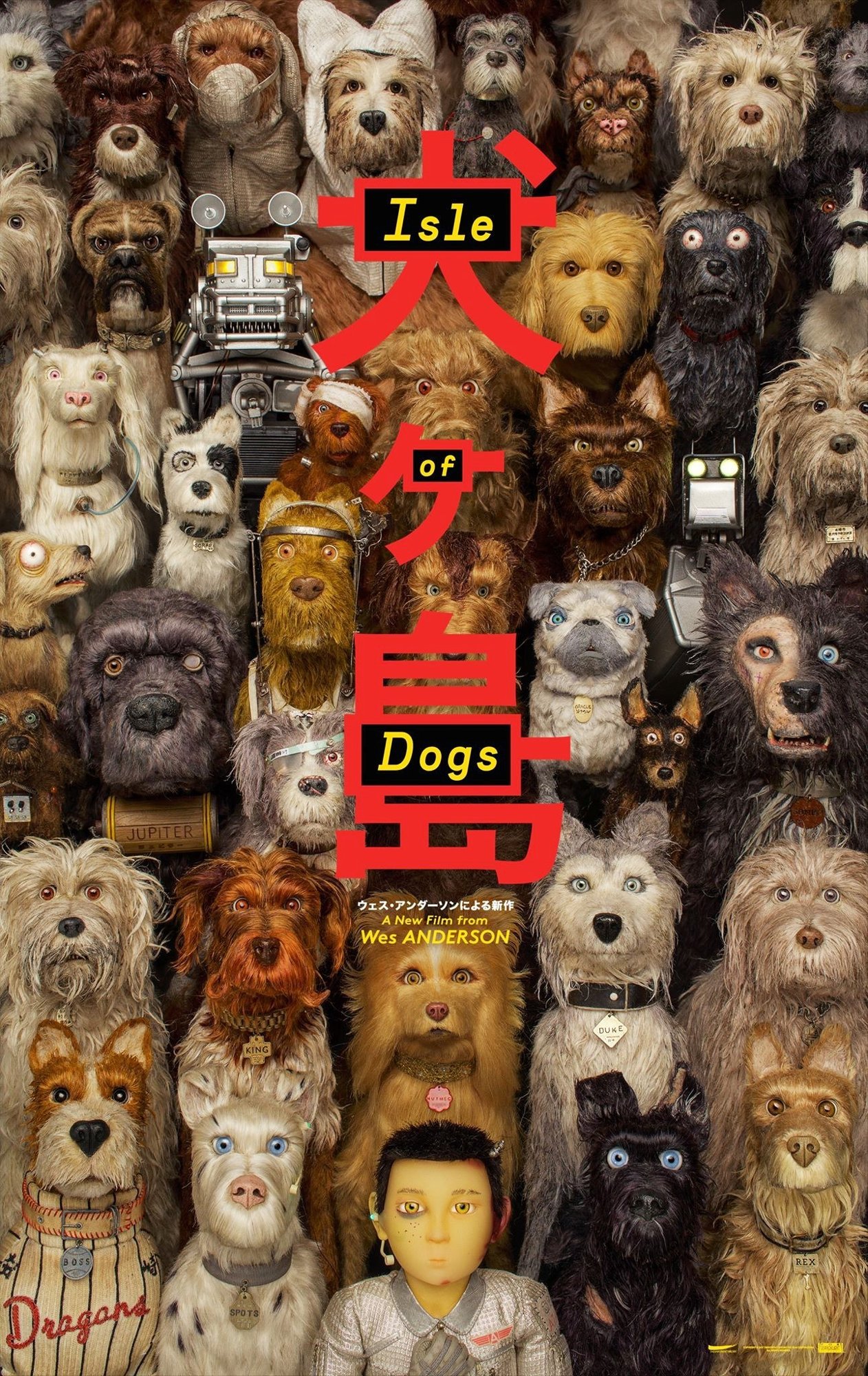 Look what happens when you shop and don’t adopt!

In the near-future Japan, a dog flu virus has spread throughout the population and caused all sorts of problems. So the mayor of Megasaki City decides that it’s best to start sending all of the dogs away to Trash Island, where they will hopefully all live out their final years, away from the human population, without infecting anymore people. And the first one to go is Spots (Liev Scrieber), the mayor’s nephew’s dog. A few years later, that same nephew, Atari Kobayashi (Koyu Rankin), comes looking for Spots, only to stumble upon a pack of other wild dogs who have quite the history. There’s the leader of the group, Chief (Bryan Cranston), the mean and rough stray; there’s Rex (Edward Norton), the more civilized and vocal one of the group; there’s King (Bob Balaban), a former dog actor from commercials, who wants one more shot at fame; there’s Boss (Bill Murray), the mascot of a high school baseball team who still immortalize him; and then, there’s Duke (Jeff Goldblum), the awfully chatty one who can’t seem to stop gossiping. Together, they all plan to find Spots and hopefully return to Megasaki City, where they can show the world that there is a cure for this sickness and not all of the dogs have to be killed off.

There’s been a rather large discussion about the social and possibly racist ramifications of Isle of Dogs and while it’s not one I want to have here, it’s one that still bothers me. Mostly, it has to do with the fact that I enjoyed the movie, laughed a lot, and had a good time just watching all of Wes Anderson’s typical wits and bits come to the screen, but in the form of stop-motion. But even when I was having the most fun, I still couldn’t help but think and wonder: Is this appropriation, or homage?

Is Anderson pointing at Chinese culture and laughing about it, and the people who are apart of it? Or, is he genuinely curious about said culture and citizens? Can a white guy make a scripted-film about any other culture? If so, what are the possible rules and regulations one must hold?

I don’t know all of the answers, but I can say that Isle of Dogs is a good time, all things considered.

Most of the issues with Isle of Dogs, isn’t that it may be cultural appropriation at its most obvious, but that it’s also a little too long and lags around in the middle, when it should have been moving full-speed ahead. As a full-length, 99-minute feature-flick, Isle of Dogs can sometimes feel stretched with numerous subplots, twists, turns, character-threads, and possible meanings, when in reality, had it been a 50-60-minute short, who knows, it would have been nicer, sweeter, and most of all, tighter. As it is though, the movie’s still fine, but you can just tell when Anderson seems to be making up the time as he goes along, which is never any fun, regardless of who the director is.

That said, watching Isle of Dogs is a true joy, mostly in part to the meticulousness of the animation and the clear care, love, and delicacy that was taken with ensuring that every shot was as inventive and as creative as the next. Fantastic Mr. Fox caught a lot of flock for being just another Wes Anderson movie, in animated-form, but whereas that movie seemed to try to hide it, Isle of Dogs doesn’t; it pops like a kid’s movie, but at the center, it’s another one of those funny, sad, and slightly dark tales about people trying to be their best and their worst, and/or at somewhere in the middle. Isle of Dogs has that same kind of dry humor we’re used to seeing from Anderson, but this time, it’s with dogs, voiced by some of the most serious actors on the planet and it works just about every time, with it seeming like even the newcomers to Anderson’s world, know what they’re doing and fit-in just like a glove.

It’s odd, too, because Isle of Dogs, despite being one of Anderson’s more delightful movies, may also be his most political, which isn’t something all that easy to come by. But what’s even more interesting about Isle of Dogs, is that you can look at this as an allegory for refugees, for immigrants, or hell, you can even look at as an allegory for how we treat our animals now. Either which way you decide to look at it, it won’t totally take away from the entertainment found in Isle of Dogs, but what it will do is have you think and wonder: It starts with Japan, who’s next?

Okay, maybe I’m being a bit dramatic. But still. Treat your pets, just as you would treat any other human out there, people.

Consensus: As is typical with Wes Anderson, Isle of Dogs is a delightful, attractive, and sometimes emotional animated flick can sometimes be a bit troubling, if you continue to think about it long after the fact.