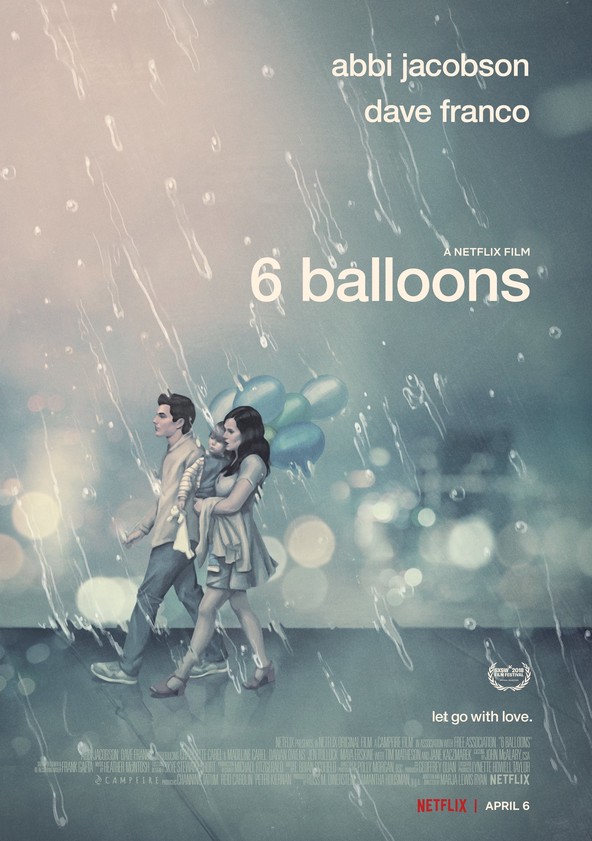 Love the brother you’re stuck with.

On that day of her boyfriend’s birthday, Katie (Abbi Jacobson) decides to throw him a little surprise get together. Filled with friends, family, and plenty of food, the event promises to be quite enjoyable, but for some reason, there’s one small problem: Katie’s brother, Seth (Dave Franco), is nowhere to be found. Why is that? Well, Katie has a feeling that he’s back to his old drug-ways and when she turns up at his door, last month’s mail not opened, his daughter running all over the place, and with him nodding in and out of sleep, she’s proven correctly. Now, it’s up to her to help her brother find some help and ensure that he stays clean forever. But they’re still brother and sister and no matter what, they still can’t help but have fun with one another and love each other’s company, like all relatives do.

Even at just barely 75-minutes, 6 Balloons still feels a little stretched-out beyond its means. It’s got a simple story and one that’s ripe with all sorts of promise and avenues to go down, but for some odd reason, writer/director Maya Erskine doesn’t really do much with this material. Mostly, she just sits the camera down, studies these two characters, and allow the day to go by in such a peaceful manner, it almost feels like there’s no drama.

And there is, right?

Honestly, not sure. The movie is supposed to be a very dark, mean and relatively depressing drama about family, about love, and most importantly of all, about addiction, but it doesn’t really have anything to say about any of those themes. Really, it’s just a movie about a sister who won’t quit on her little brother, no matter how many times he screws up and proves him to be a general f**k-up.

That said, watching Abbi Jacobson and Dave Franco work together, and with this kind of dramatic material, it’s quite a treat. Franco is getting more and more dramatic the older he gets, but I’ve never seen Jacobson like this; the crazy, sometimes over-the-top character she plays on Broad City is nowhere to be found here and it never feels like she’s trying too hard. If anything, she’s a drop-dead serious woman who has to think of what she wants to do with the rest of her life and is ready to grow up a whole lot more. She’s not goofy, she’s not pedantic, and she sure as hell isn’t cracking any jokes, but hey, it all kind of works and it makes me curious to see what she’s got next, aside from all things comedy.

And yes, Franco is fine, too, but really, his character is perhaps the most boring and conventional of the two and feels like more of a type. We get to see some dark glimpses into his character and just the lengths he’ll go to to ensure he gets his high, but really, he’s a bit of a bore. He’s just another good-looking, dude with boy-ish charms, sweating, yelling, and painstakingly miserable until he gets a little dope.

We’ve gotten enough of them in this world, that’s for sure.

Consensus: As slight and as small as you can get, 6 Balloons mostly benefits from a solid performance by Jacobson and doesn’t demand much else from the viewer, which is neither good, nor bad. It’s just a thing.