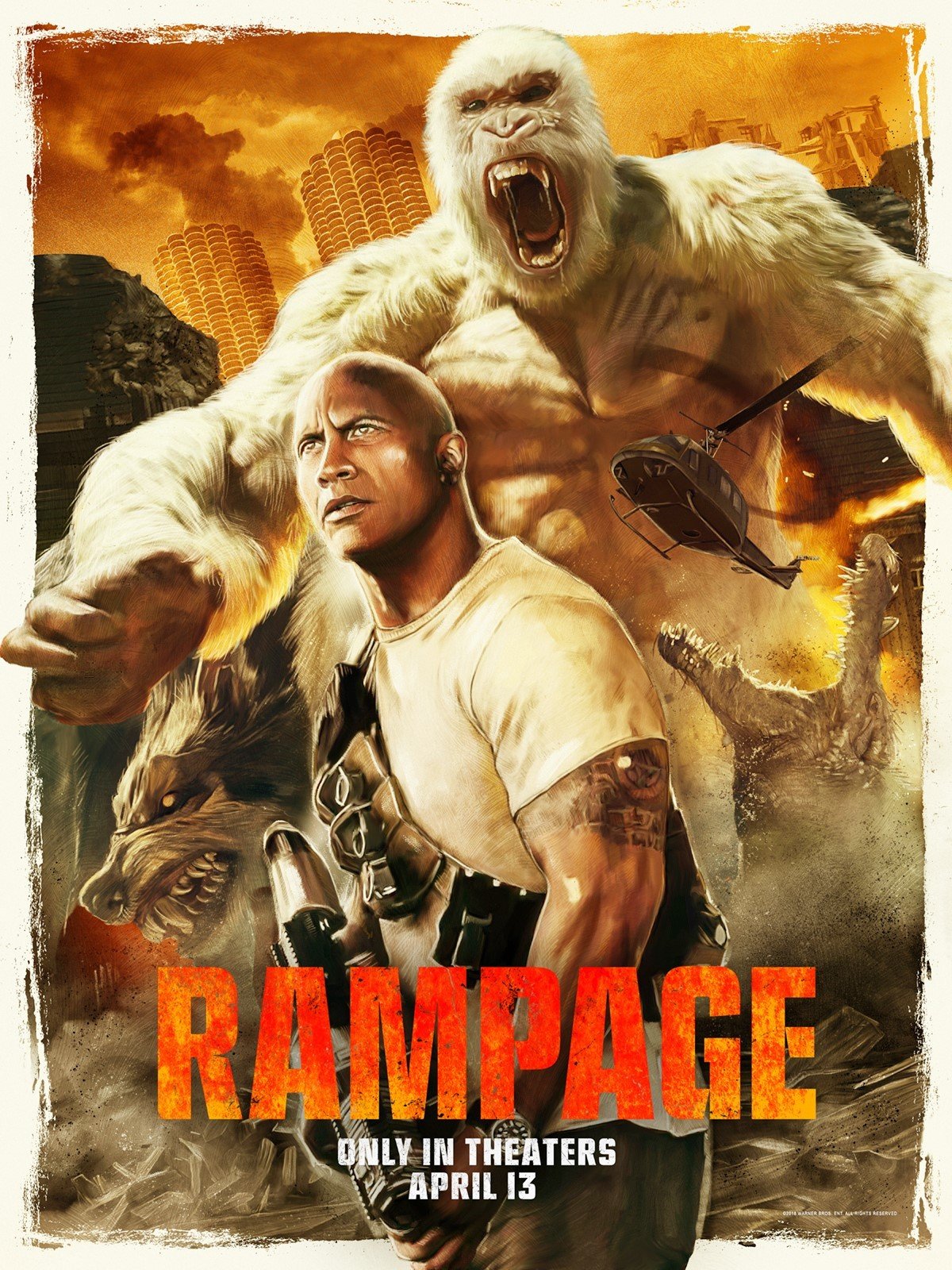 Yeah. Endanger all the animals.

Primatologist Davis Okoye (Dwayne Johnson) loves animals so much that it’s all beginning to take a toll on his personal life. He doesn’t really get out much, socialize, and despite being a total and complete hunk, go out with any ladies; he mostly keeps to himself, nurtures all of the animals in animal-shelter, and continues to try to teach and nurture his best buddy, George, the last albino gorilla on the planet. But everything spirals out of control when George becomes infected with some sort of rage virus, having him grow exponentially, and literally destroy everything in its path. Why is this? Davis doesn’t quite know, but geneticist Kate Caldwell (Naomie Harris), who helped create this virus, has an idea and knows how to hopefully stop George, as well as other animals infected, from growing and becoming increasingly more violent. But with the government, major corporations, and the army involved, it’s going to be a whole heck of a lot harder for two people with a good cause to save the day.

If you look at it, Rampage may be the best video-game adaptation we’ve had yet. Sure, there are some movies that are better than the marker they get stuck with (looking at you, Rise of Chun-Li), but yeah, it’s mostly a low-bar and even at that, Rampage isn’t all that great. At its best, it’s accessible, popcorn entertainment given to you by people who know how to do this kind of stuff. The Rock has settled in quite nicely as being the next Schwarzenegger, where he’s able and willing to be goofy, but also still keep it serious enough to where we believe him in these action-vehicles and with director Brad Peyton (who has worked with him twice so far on Journey to the Center of the Earth 2 and San Andreas), he seems to have hit his soft spot.

But should it be so much more than just generic fun? Well, probably.

But here’s the thing about Rampage: It still takes total advantage of its silly-premise and doesn’t seem as if it’s totally making itself up as it goes along. With four writers, this could have been a total messy mish-mash of action, adventure, sci-fi, video-game stuff, romance, comedy, and silliness, but it surprisingly keeps itself moving and on-point, with the set-pieces delivering a solid bunch of thrills. We know what’s going to happen, we know how it’s going to end, and we know where it’s going, but there’s still a certain thrill in the air, which with big blockbusters like this, that’s all that matters.

San Andreas was the same way in that it took a lot of tense and exciting set-pieces that we’ve seen a thousand times before, but still somehow delivered the thrills on – Rampage is sort of the same fun. It’s a whole heck of a lot goofier, what with the large monsters battling one another and the government agencies always popping up at the wrong times, but hey, it means well and it’s not a total and complete dull-fest. Which is a godsend, when you compare it to all of the other video-game movies out there.

Once again, the bar is set low, but at least it rises above and provides an entertaining time that may make you want to check out the game. Until you realize that it’s literally just a bunch of huge animals, knocking down buildings, eating people, and occasionally beating the hell out of each other. No human characters worth getting invested, no starry-ensembles working well with a lame script, and sadly, no Rock.

So yeah. Maybe just see the movie and be happy.

Consensus: When it comes to video-game movies, Rampage is better than most, with a fun and exciting feel to everything, especially with the Rock at the center of it all.