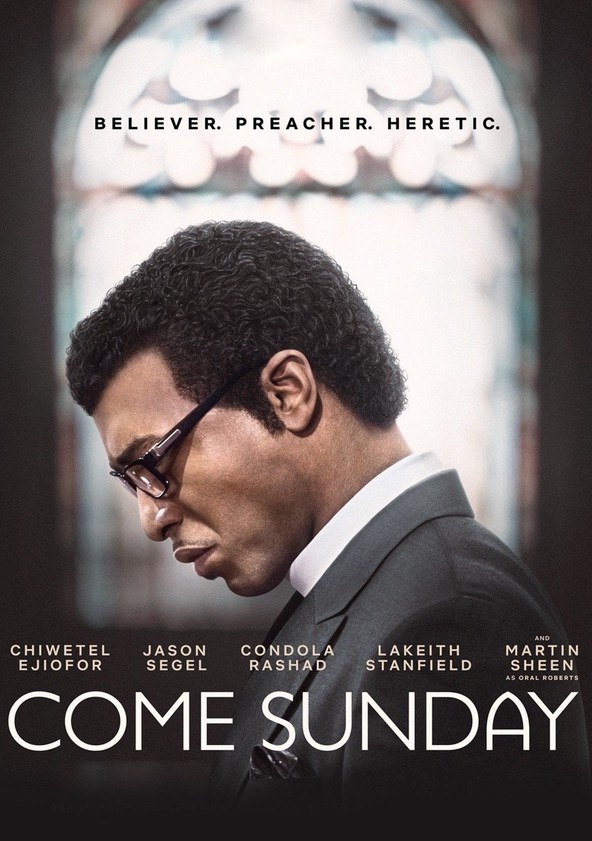 Who needs an afterlife anyway?

Carlton Pierson (Chiwetel Ejiofor) was a world-renowned and respected preacher among his peers. He was fun, electric, and most of all, passionate about what believed in; his wife (Condola Rashad) would perhaps say “too passionate”, but still a believer in his faith nonetheless. It’s why his church was one of the most popular in the area and it’s also why he was being groomed to take over the prestigious Oral Roberts Evangelistic Association. However, his life and career took an odd turn when he received a prophecy from the lord himself which stated that there was no hell, but only heaven. While Carlton was shocked by this, he made it a known fact to his congregation and slowly, but surely, suffered from the backlash, animosity, and general distaste from those who didn’t believe in his words any longer, forcing Carlton himself to sit back, think long and hard about what he heard and whether he believes it to be true or not.

At the center of Come Sunday is this really interesting note about faith and questioning it: How can we really know something to be true, when we’ve never seen it, or experienced it first-hand? Better yet, how do we know something to be true, even if we’ve never heard of it being true from anyone else who has ever experienced it? This conflict between hell, heaven, and whether or not it’s real, or even exists, is an interesting one because in Come Sunday, Joshua Marston has us side with Carlton Pierson for saying what he believes in to be the truth, but also holding him up as an anomaly, too.

Is he telling the truth? Does he really know? Better yet, do the people who throw their support away from him really know? If they don’t, why are they so quick to deny what Carlton himself has to preach? Is it out of pure terror? Or is it because they genuinely believe in something that they don’t know to be true for themselves and for anyone else around them?

It’s an interesting question that I couldn’t stop thinking about, even when Come Sunday itself moved on from it, which was a bit disappointing.

And it’s not like Carlton Pierson’s story isn’t an interesting one to begin with; here’s a black man who was somehow able to get blacks and whites together under one roof in the church, throw all of their differences away, and just praise the lord. The movie sheds some light on this, but also proves that he may be just another one of those typical preachers who’s big, loud, flashy and generally kind-hearted, but also may be totally full of s**t.

Still though, that sort of bias towards religion, or towards any form of it doesn’t matter for a movie like this because even director Marston doesn’t get too wrapped-up in what’s true or not; even the prophecy itself is handled in such a subtle way, you could blink and probably miss it. What, or who for that matter, that Marston focuses on the most is Carlton himself, his struggle with faith and the life he’s chalked out for himself and it’s made all the better by a compelling performance from Ejiofor, as only he knows how. We see a truly troubling man, struggling to figure out what information he has with him and the responsibility he shoulders everyday; he’s not necessarily a saint here, but he’s also not a terrible person, either. He’s somewhere in between, which I guess is better than being totally and completely one of the other factors.

But as for the rest of Come Sunday, for some reason, it’s all a little flat and misguided.

For example, the movie never really makes sense of what was accomplished by telling us this story in a full-length feature-form. We get an inside look into Carlton’s life and his crisis of religion, but aside from him, it’s all pretty thread-bare. We don’t really understand what the movie has to say about what he’s heard, the people surrounding him, or better yet, even the church itself. The movie tries to be about so much, but ultimately, settles on nothing and it’s what makes all of those interesting and important questions touched on throughout, feel wasted in something else that’s always figuring itself out. Maybe it was trying to be a lot more like Carlton, but then again, even he bounced back in real life and figured out what he wanted to say for the whole world to hear.

Come Sunday, unfortunately, can’t, or doesn’t know how to. Which is a shame.

Consensus: Even despite a great performance from Ejiofor, Come Sunday never becomes more than a dramatic retelling of one man’s struggle with faith, that has some interesting points to bring up, but never quite goes anywhere with them.