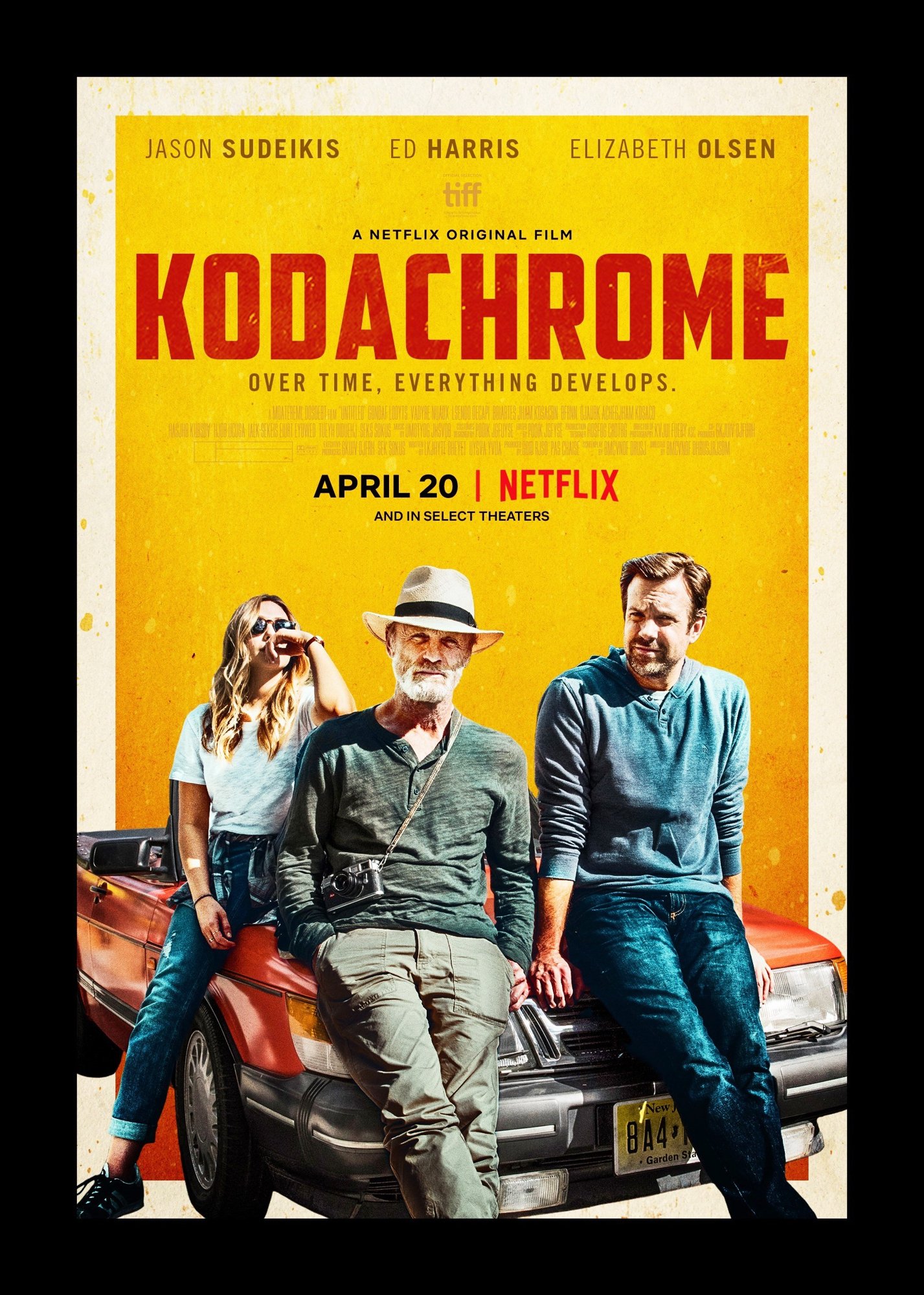 Out with the old, in with the new! So beat it, baby boomers!

Matt (Jason Sudeikis) is a struggling music executive doing his best to not just keep up with the times, but find the best and brightest names in music. It’s becoming a lot harder and he’s given an ultimatum: Sign a big name, or he’s fired. That’s when Matt hears about his father, famed photographer Ben Ryder (Ed Harris), who is slowly dying from cancer and wants to reconnect with Matt before he goes away. Matt doesn’t care, but he soon receives an ultimatum from Ben’s manager (Dennis Haysbert): Take a road trip from New York to Kansas so that his dad can process his last rolls of Kodachrome film before for the sole remaining lab closes, and he’ll get the opportunity to have a sit-down with one of the hottest names in music. Matt hates his dad and doesn’t want anything to do with him, however, he decides to take the trip and stick it out with the old man, as well as his nurse/assistant Zooey (Elizabeth Olsen), who is just doing what she can to make sure the two don’t kill each other before the trip is over.

Kodachrome is a very conventional movie that still finds small, interesting and smart ways to become something more than just another “road movie where an estranged father and son reconnect after all of these years apart”. We’ve seen this story a thousand times before, which doesn’t make it any less true or human, but just boring, as if we’re running out of ideas, even in indie cinema. But that’s why Kodachrome, in its own admirable ways, does what it can to be above the rest of these familiar flicks – it has a heart, it has some humor, and guess what it, it actually feels like it has something to say.

It may not be a ground-breaker, but hey, not every freakin’ film needs to be.

Especially for Netflix who, for the past year or so, haven’t really been delivering solid movies on a weekly-basis. But with Kodachrome, they find their ability to tell a small story, without trying to over-reach. Director Mark Raso and writer Jonathan Tropper find a solid middle-ground where the movie is just hokey and honest enough to give us an idea that these people are generally likable and enjoyable enough to be around, but they can also be mean son-of-a-bitches.

And it all comes out with the great performances, most especially from Sudeikis who seems to really be relishing in this aspect of taking him as a serious leading-man. But hey, it fits him like a glove; he’s still able to be sardonic and a little smarmy, but also a real human being that has a heart, a pulse, and most importantly, feelings. The scenes with him and Ed Harris, while somehow always feeling like they’re going to end in a sparring-bout, brim with a certain air of intensity and emotional honesty that you could only get with two actors who know perfectly well how to play it funny, but also serious. Elizabeth Olsen’s character too, despite feeling like a last-minute add-on during the writing-process, is less of a type and much more dimensional as the story progresses, with her and Sudeikis creating a nice bit of chemistry.

But really, it’s the bittersweet message of Kodachrome that sticks, even as cliched as it can get.

Sure, the movie’s about ancient, old artifacts of yesteryear going the way of dodo and the future breaking down the doors, but it’s also about keeping these artifacts close to your heart and alive, no matter how the times change. Not to say that there’s a problem with moving on, as all people should be, but remembering the past, where you came from, and all of the flaws that come with it, are also important. Kodachrome doesn’t always mask its subtlety of being both a story about a father and son coming back together, as well as the transition of film to digital, but hey, it’s an effort that we rarely see and it still works.

Consensus: With a small, but honest beating heart, Kodachrome makes great use of its simple, somewhat formulaic story, that also works as another showcase for the talents of its cast, most especially Sudeikis.