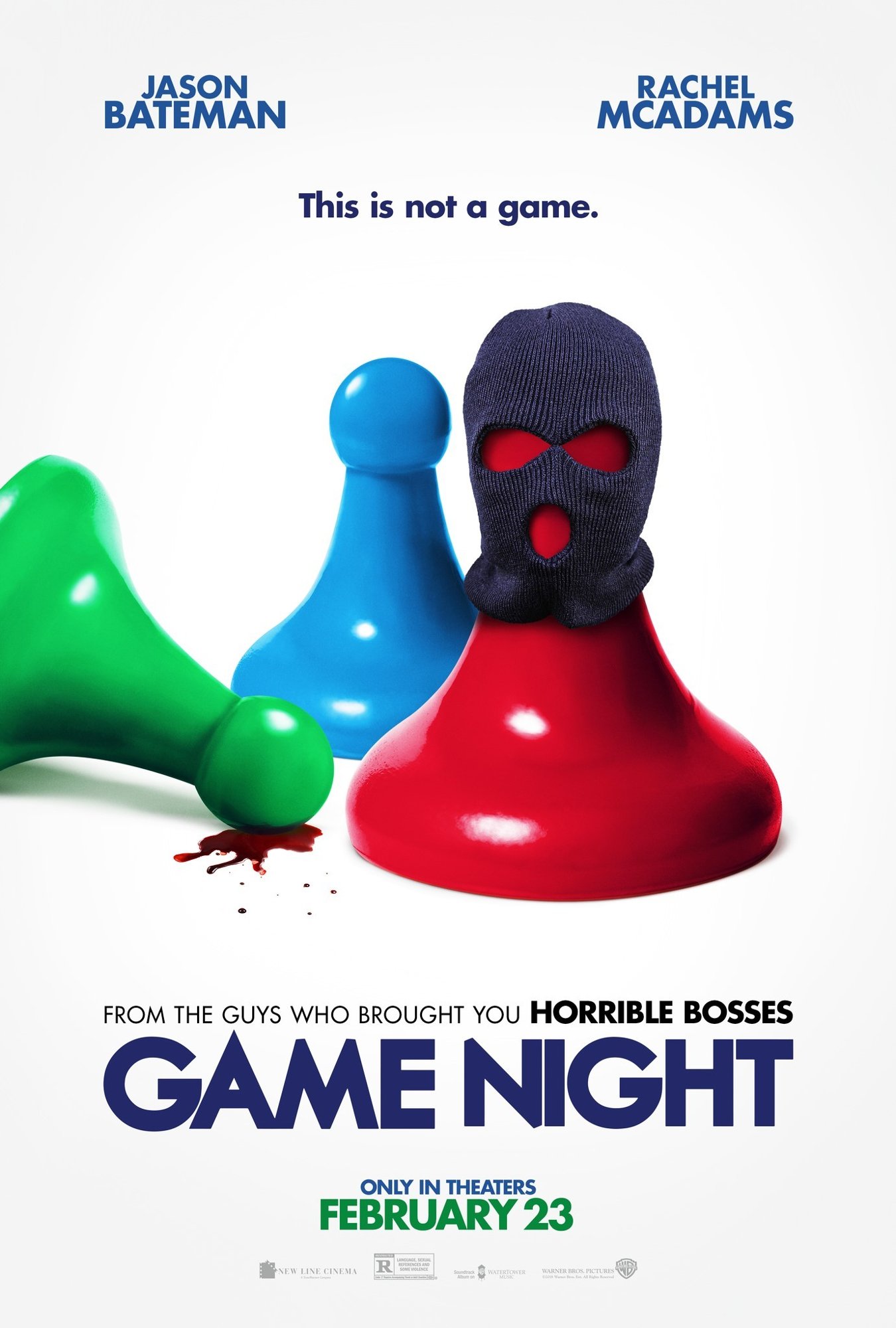 Was Go Fish not available?

Max (Jason Bateman) and Annie (Rachel McAdams) have been together for so long and have been so in love with one another for one reason: They’re both great at playing and winning games. It’s their love and their life, but they want to build a life together and are having a slight issue with that. Is it because they are too competitive and not focusing on the small losses? Whatever it is, they push it all to the side when Max’s brother, Brooks (Kyle Chandler), shows up in town for another wild and crazy game night with their usual band of friends. But for some reason, it’s at Brooks’ house and it’s much, much different from what they’re used to dealing with. What turns out to be a simple role-playing game of finding who captured Brooks, soon ends up being a real life game of life or death, with drugs, thugs, and lots of violence. Nobody is really ready for this, but it’s game night and they still feel like it’s their responsibility to fix it all and save Brooks’ life while they still can.

Game Night is the rare studio-comedy that not only feels to have an aspired idea, but seems to actually do something with it. It would have been incredibly easy for Game Night to just be somewhat about this kidnapping premise, but really just focus on the silliness of these characters, the casts’ ad-libbing, and generally not having to worry too much about the plot. A lot of studio-comedies have been doing that as of late, but thankfully, Game Night is different in that it doesn’t just have a story and a script, but a bunch of laughs that work and feel inspired, as opposed to being just throwaway gags about pop-culture.

So yeah, it’s something of a small miracle, I guess. And it couldn’t have come from weirder people in the form of co-directors John Francis Daley and Jonathan Goldstein (the two guys who did the Vacation reboot), working on a script from Mark Perez, who has mostly been a Disney guy. Together, they all make Game Night a dark, but funny thriller that isn’t afraid to keep surprising us with where the plot goes and offer us twists, but also give us genuine laughs that seem to come out of the plot that don’t feel easy; there’s a lot of pop-culture references to other stuff that, in any other movie, would have felt cheap and shameless, but work here because there’s a reason for those references to exist. The cast isn’t making this stuff up as they go along and it not only makes the film funnier, but far more entertaining, giving Daley and Goldstein plenty of opportunities to keep the plot moving whenever they feel like they’re slagging.

Which, for a movie that hits nearly an-hour-and-a-half and hardly ever lets up, then yeah, it’s good to have.

It’s also nice to have this ensemble who, even with a lesser-script and direction, would have done their best to make this work. But because they have a lot to work with, they get the opportunities to shine and remind everyone watching what they do best, especially from Jason Bateman who finally seems like he’s got a movie that’s good, but uses him tremendously well. Sure, he’s still snarky and sarcastic, but he never hits a dull moment and has you listen for every little line he has to drop, because it might be just as funny as the last one.

Same goes for just about everyone else who’s involved with this party. It’s nice to see Rachel McAdams in a studio-comedy again, not just bringing a lot of charm to her role, but being funny again; Kyle Chandler has some surprisingly fun moments as Brooks, the brother; Billy Magnussen plays another idiot, but is always fun to watch in that role; Sharon Horgan shows up as his date and is a lot smarter than she lets on, making me miss Catastrophe even more; Lamorne Morris and Kylie Bunbury are a lot of fun to watch as the bickering couple who just won’t give up arguing about the little stuff; and as the creepy neighbor, Jesse Plemons is great, stealing just about every scene and actually bringing some pathos to what could have been just a total joke character. There’s obviously a bunch of cameos here, too, but the movie isn’t totally dependent on them because it’s already got fun stuff to work with, which makes it feel all the less shameless.

Consensus: As far as studio-comedies go, Game Night hits just the right spot between being funny, exciting, and charming, using its ensemble in the right way that other movies haven’t been able to just yet.