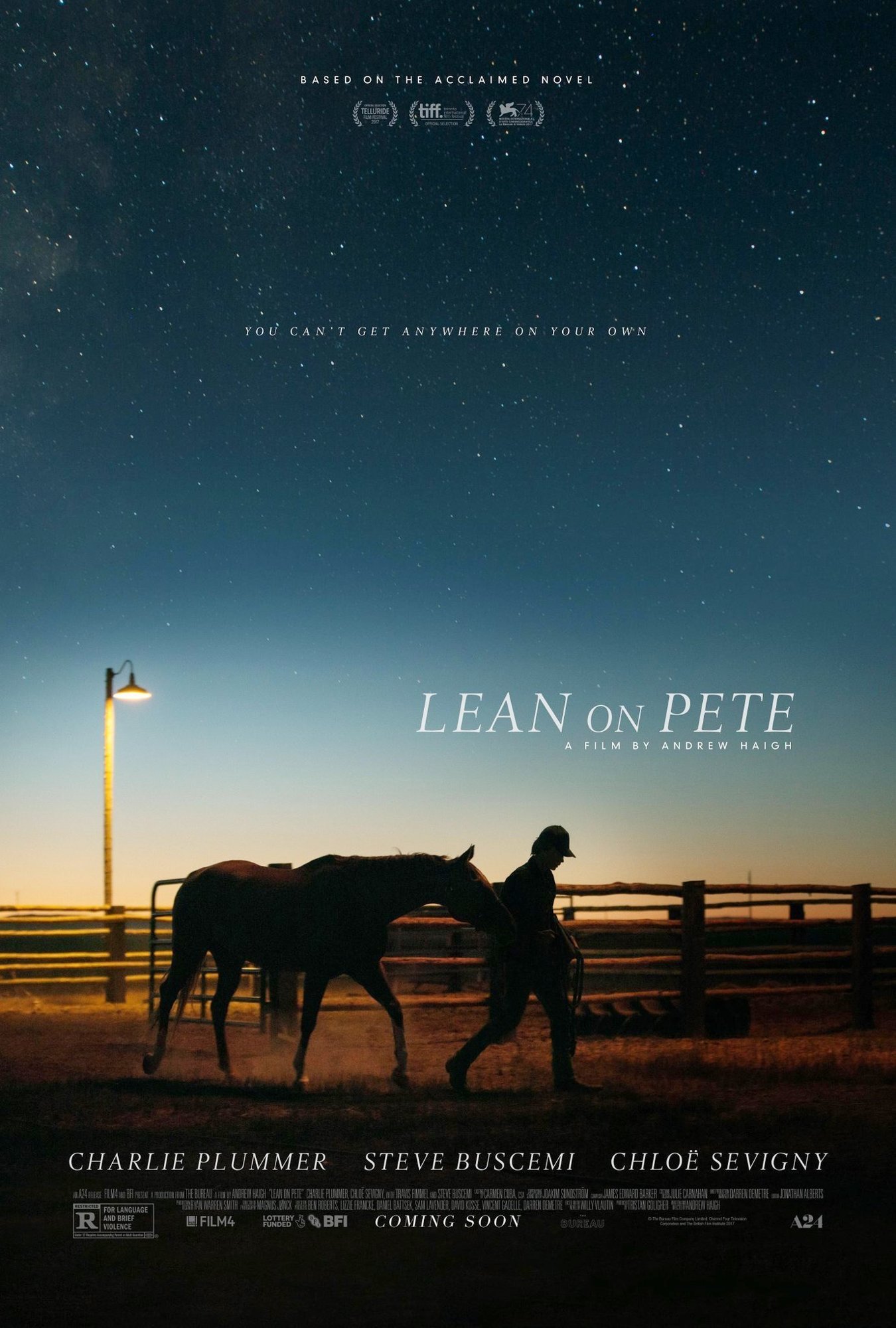 Sometimes, the best companions are the ones who say nothing at all.

After a rough time of where he was previously, Charley (Charlie Plummer) ends up in Oregon at his father’s house, where he’ll hopefully reconnect with his rather estranged father (Travis Fimmel), but maybe even stay there for awhile, too. So he picks up a job as a horse-trainer for Del (Steve Buscemi), gruff and somewhat mean-spirited guy who respects and pays Charley, but also doesn’t really respect the horses he has. Charley’s much different, however, and he grows a certain appreciation and fondness for “Lean on Pete”, Del’s prize-horse who wins him all the big bucks at the local competitions and fairs. However, when it seems like Del is going to get rid of Lean on Pete in hopes of covering his losses, Charley freaks out and decides to take the horse for a cross-state adventure of their own, away from all of the hardship and pain that was there for them in Portland, Oregon. But it’s rough out there on the streets for a guy and his horse, and especially for someone like Charley who may be resourceful, but is also still quite young and easily taken advantage of.

For the longest time, Lean on Pete feels like it doesn’t have much of a plot and is instead going to be a meditation on certain moods, feelings, and ideas that writer/director Andrew Haigh has always worked well with. Haigh himself in the past decade has learned that it’s best to not get in the way of the material and just to let it all play out on the screen, as slow and as surely as possible. Some may see this as “boring”, or “pretentious”, but for others, such as myself, it’s something of a joy to watch because Haigh knows how to pace his movies so well that you hardly notice how slow everything is moving, nor do you realize that there isn’t quite a plot to work with.

Eventually, that all changes here in Lean on Pete and it’s a tad disappointing, because it doesn’t just get more conventional and possibly formulaic, but it also feels like Haigh isn’t following his normal intentions. The pace is still slow and meditative, but there’s something driving the movie now to a certain point and it feels like Haigh has to take some small shortcuts to get there, without ever abandoning his style. Haigh’s best attribute as a writer and especially as a director, has always been his ability to just plop the camera down, let the actors put in great work, and not really get in the way of everything.

Unfortunately, he sort of does here with Lean on Pete and it’s why it’s a tad bit of a disappointment to watch.

That said, the movie itself still works because Haigh’s style never ceases to work and with this ensemble, he can’t do any wrong. In the lead as Charley, Charlie Plummer does a wonderful job playing this young, naive and somewhat depressed kid we’re never too sure of. Is he depressed? Is he confused? Is he secretly a cold-blooded murderer? Or, simply put, is he just a kid who wants something of a family-unit in his life to love, support, and be there for him, whenever he needs it? Whatever he is, the movie never strays from him and it’s a testament to the talent of Plummer who has us constantly guessing about him and thus, never getting bored of him, or his journey, wherever it may lead.

The rest of the cast is pretty great, too, with Steve Buscemi putting in a memorable performance as Del, the cranky old-timer who seems to respect Charley for his work-behavior, but doesn’t quite respect much else in life. The movie seems to say that the world aside from animals, and most of all, horses, are really the only ones you can love and trust, which is why a good portion of the characters that Charley meets, good or bad, are kind of caricatures. There’s a bunch of drunk and obnoxious cowboys who can’t seem to take no for an answer; there’s the old ranch-owner who treats his granddaughter poorly for being heavy-set; there’s a homeless drunk (Steve Zahn) that seems like a cool guy, but ultimately turns into a crazed and vindictive psycho; and there’s even a jockey (Chloe Sevigny) who’s sweet to Charley, but once again, treats the horses she uses as nothing but that: Horses.

She doesn’t treat them as loving, living, and breathing animals, but as objects for which they can be more successful from. There’s a point to be made here about humanity’s treatment to those less fortunate and inferior species’, but Haigh never digs deep enough to get there. He just sets his camera down and lets the actors do all of the work, which is fine and brings a lot of interesting-factors, but overall, feels like it’s about something, yet can’t pin-point what.

Just be nice to animals, I guess is the message.

Consensus: A slight step down from Haigh, Lean on Pete still offers smart and understated drama, with great performances across the board, yet doesn’t dig nearly as deep as one would expect.