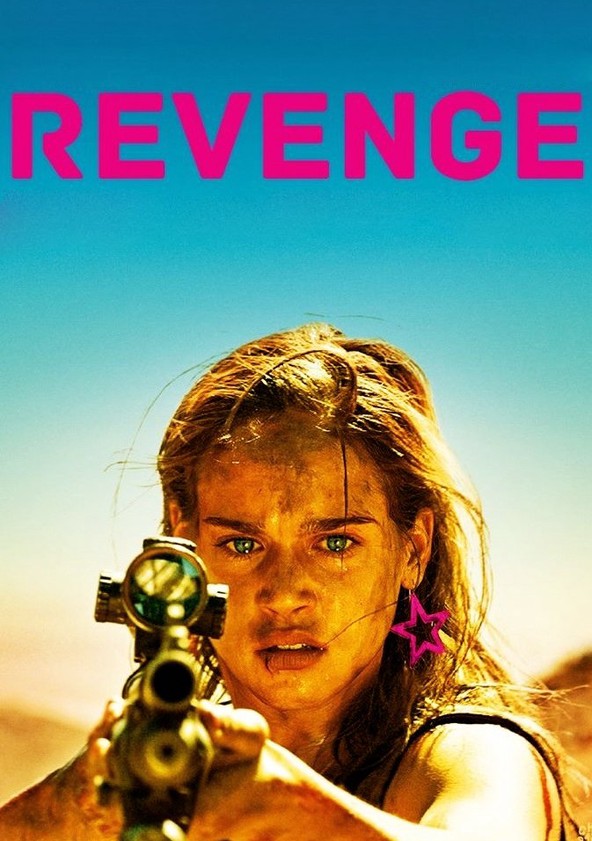 Jen (Matilda Lutz) is an American socialite, who travels with her married French millionaire lover Richard (Kevin Janssens) to a remote vacation home for a weekend full of love and passion. However, things go awry when Richard’s hunting buddies Stan (Vincent Colombe) and Dimitri (Guillaume Bouchède) arrive early, and the guys like what they see in Jen, most especially Stan who takes it upon himself to rape Jen. Obviously horrified, Jen wants out of this trip right away and threatens to not just tell Richard’s wife about what transpired, but also the authorities and it’s not something these rich guys want. So, they toss her off a cliff and leave her to die. Unfortunately for them, Jen’s not dead – in fact, she’s very much alive and ready to extract all sorts of revenge on these rapey d-bags.

Revenge is an interesting combination of genres, but mostly it’s a mix between the rape-and-revenge horror flicks and Australian outback thrillers of the early-70’s. Which means that it’s totally sleazy, it’s totally disgusting, it’s totally upsetting, and oh yes, it’s totally violent, but it’s never boring. Writer/director Coralie Fargeat could have easily gotten away with copycatting style-points and showed the world that she knew what movies were to cool to watch and take notes from, but instead, she infuses a simple story with an actual visceral gut-punch that feels like it’s out-doing itself just about every chance it gets.

Just when you think it’s done grossing you out and having you reach for your barf-bag, guess what? It takes the next best step to have you ready to walk away from this thing completely. It’s also especially telling that the rape itself isn’t shown, but just heard, leaving all of the heinous violence filled with as much blood and gore as the budget can allow. It’s the kind of movie that it isn’t afraid to take that next step into shocking us, but at the same time, doesn’t seem like it’s trying all that hard in the first place.

It’s just shocking, raw, and downright gnarly as it is. Why try for anything else?

And in the era of #MeToo, it’s a nice change-of-pace that Revenge takes its plot as serious as a heart-attack; the plot may expect all sorts of wackiness and general goofiness from a sleazeploitation flick, but the tone is drop-dead serious and inhumane to the point of where it’s depressing. But that’s the point – the movie isn’t attempting to glamorize the violence that Jen eventually gets into, but instead, show us that there’s a price to pay for sexual-assault and injustices towards humans. It’s a simple, honest message, but the movie never allows us to forget, even amidst all of the blood, guts, hacked-off limbs, and bullets, that it’s a movie about a woman receiving non-consensual sex, a woman not being too happy about that, and a woman taking matters into her own hands.

If that’s not feminist, I don’t know what is. And I respect it all the more for that.

Consensus: As dirty and as graphic as the exploitation flicks of yesteryear, Revenge never forgets about its heart at the center, even when it’s too busy literally ripping them out of its characters.