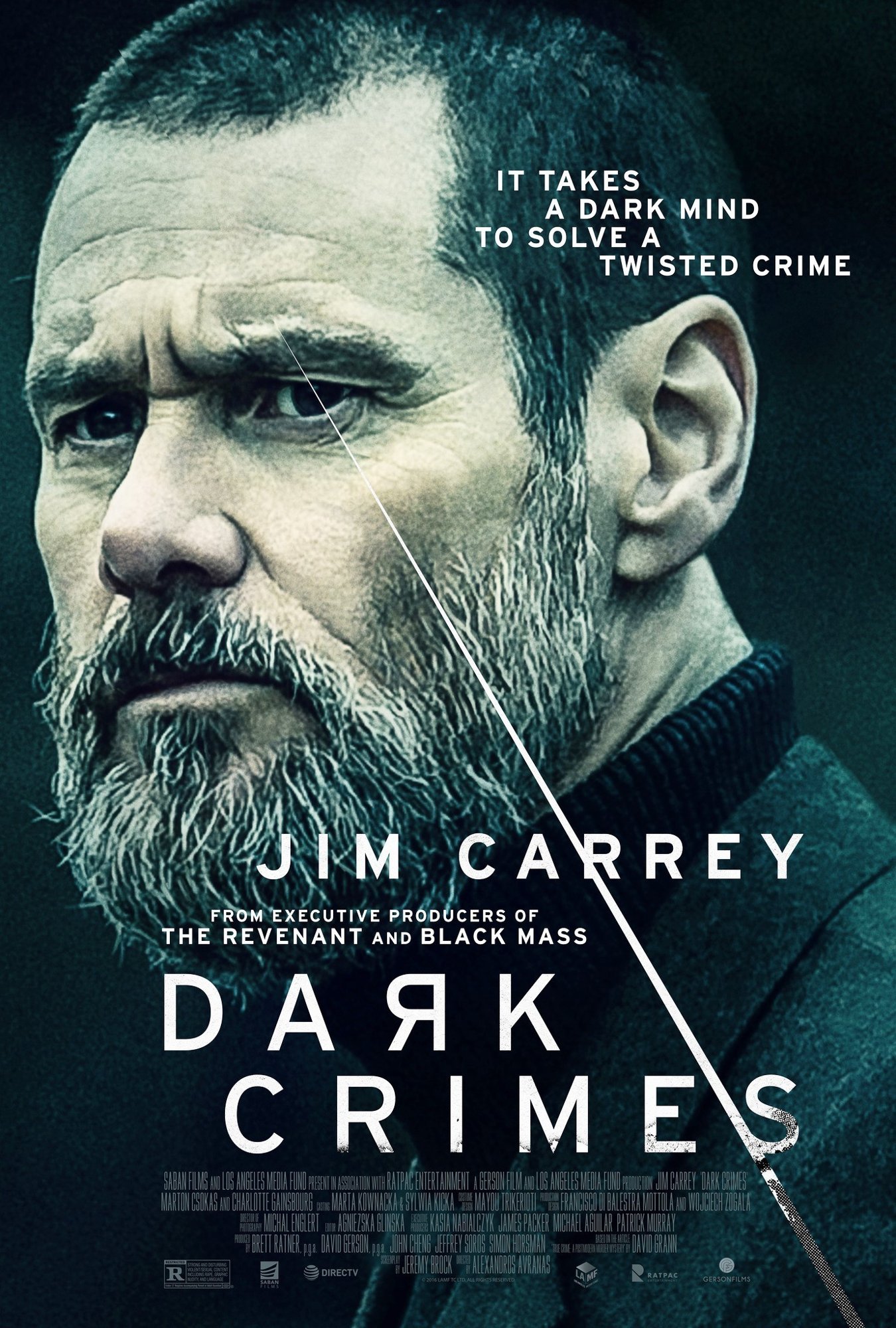 Gotta look out for those Polish authors!

Tadek (Jim Carrey) is a detective who takes on a case involving the murder of a businessman and it seems pretty simple, for the most part. There’s a murder, there’s a motive, there’s a bad person, and yes, it all has to get figured out. But it turns out that the case is identical to a character’s murder in a recently published novel by a man named Kozlow (Martin Csokas) and Tadek can’t seem to get over that fact. However, because the novel and the author is so popular at this moment, without some hard evidence, Tadek can’t get anywhere further on the case – he has to continue to drive himself, as well as everyone around him, insane. And it’s not much later until Tadek realizes that there may be a bit of a break in the case, but it may also be a break in his psyche.

It’s hard to call a movie “bad” if it never really takes off in the first place. And it’s weird because it doesn’t seem like Dark Crimes was directed terribly, or even put together in an unwatchable way; director Alexandros Avranas brings much of what he did to Miss Violence in that he remains detached and unmoved by all of the dark, upsetting things that take place on the screen. This works as far as setting the mood, but the usual issue with movies such as this, is that they mistake “mood” for actually taking over “plot”; featuring countless scenes of pale, scared-looking people staring into space isn’t developing anything, it’s just meandering.

And that’s the main issue with Dark Crimes – it just meanders and never gets anywhere throughout it’s 90 minutes.

Which is odd because it didn’t really have to do much in the first place; the story was already there, the ensemble came ready to play, and the setting was already chilly enough to begin with. But nope. For some reason, Dark Crimes moves at such a snail-like pace that by the time we start to figure out what happened with this murder, who the real culprits are and why, it feels like a little too late. It’s almost as Avranas himself just showed up, filmed everything in the most plain, simple and boring way, and left it all that, got his check, walked away, and hoped for the best.

And once again, this is odd because Dark Crimes isn’t the kind of movie that could be considered “god-awful”, it’s just a snooze that never gets going anywhere. Even the prospect of watching Jim Carrey as a bearded, quiet and slightly deranged Polish detective isn’t as much of a novelty as it should be; Carrey doesn’t feel miscast as much as he feels like he’s trying too hard to be off-kilter and bizarre, almost to the point of where it seems like parody. Same goes for just about everyone in the cast, with Csokas playing the baddie, as per usual, and Charlotte Gainsbourg playing a tortured and emotionally battered woman who somehow stumbled out of Antichrist and landed in a much weirder movie.

Okay. Maybe Dark Crimes isn’t that weird, but you get my drift. In fact, it probably could have benefited from some weirdness and gave us something to watch and even enjoy.

But nope. We can’t always get what we want.

Consensus: As far as crime-thrillers go, Dark Crimes isn’t nearly as shocking or as tense, as much it’s just slow, brooding, and boring, making it easy to see why it sat on the shelf for so long.