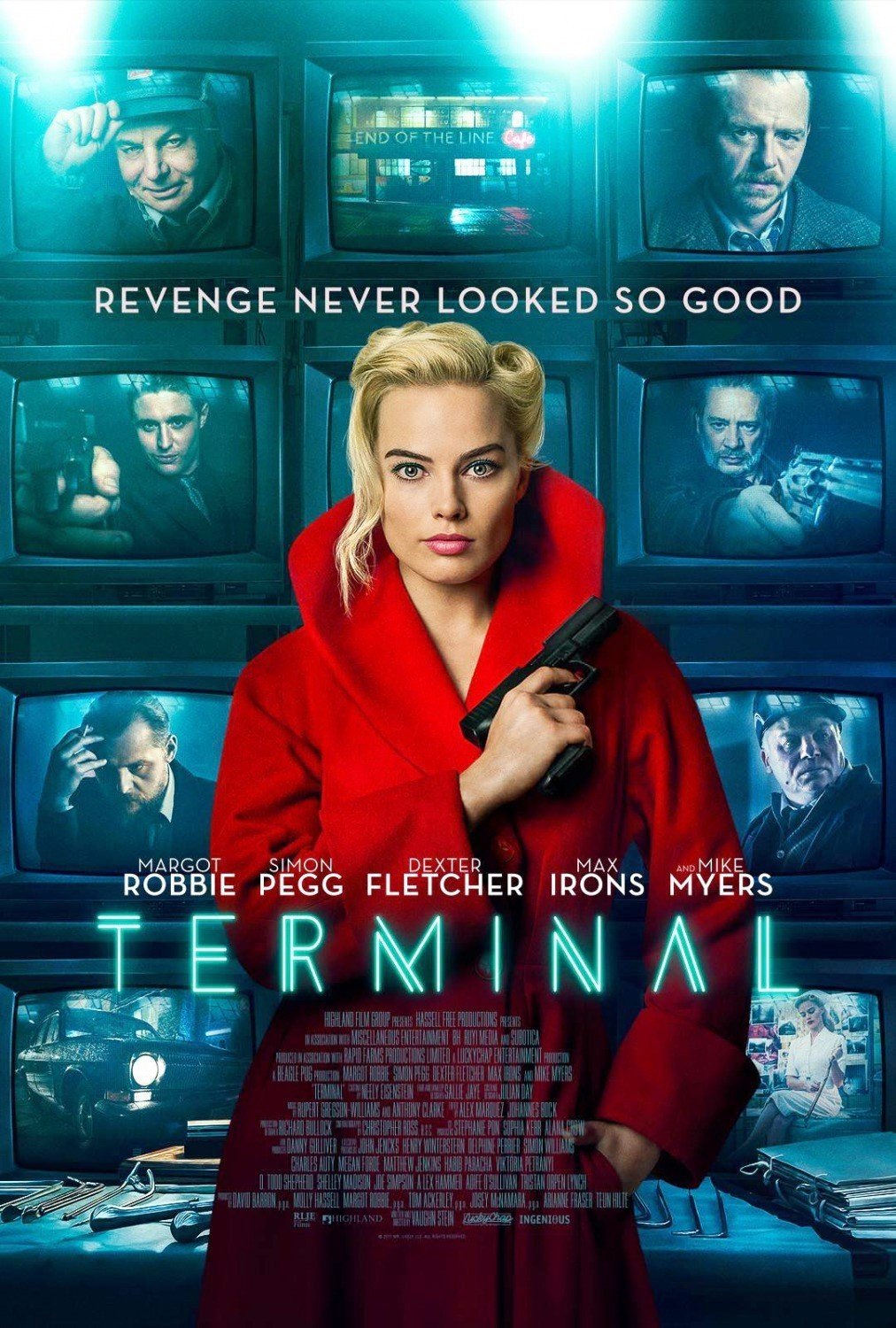 Assassins sure do have loud mouths!

Two hitmen, Alfred (Max Irons) and Vince (Dexter Fletcher), decide to take on high-paying job, without really knowing who their employer is. That’s fine and all, until the job becomes a hell of a lot more serious when Alfred falls for a waitress/stripper/possible hitman herself, Annie (Margot Robbie). Meanwhile, an English teacher (Simon Pegg) is diagnosed with cancer and trying to figure out how to spend his last moments on Earth. Annie has a few ideas and decides to talk, talk away with him, deciding whether he should go out in a blaze of glory, or just wither away and die, without anything really mattering. Meanwhile, a janitor (Mike Meyers) stumbles around the terminal, cleaning everything in sight and running into all of these characters.

Terminal is the kind of directorial debut where you can tell that the person behind it all is clearly just getting out all of his ideas that he has in his head, out onto the screen, and not really caring if they fully fit together or not. While that sounds like a total mess, believe it or not, writer/director Vaughn Stein has a good idea of what he’s doing and is able to cobble-up all of his different ideas and have them all play out in somewhat reasonable, entertaining manner.

Is Terminal a perfect movie? Not really. Could it have benefited from perhaps a few more rough drafts of the script? Possibly. But regardless, it’s an odd mixture of dialogue coming from the likes of Tarantino and Guy Ritchie, with an bright, pulpy, and kinetic direction that matches the likes of a Nine Inch Nails music-video. In other words, it’s an interesting movie that proves that as long as you have some sort of discernible and enjoyable personality, it doesn’t matter how much of your movie doesn’t entirely work.

And yes, that is the case with Terminal.

Which I know this sounds like faint praise, but considering it’s rather poor-rating on Rotten Tomatoes as this is written, it deserves to be said that Terminal has just enough wit, weirdness, and fun to make it worth the 90-minutes. Stein runs into the issue of probably not really needing a few of the twists, or turns, or especially the long explanations that eventually come into play, but he at least throws enough at us to have us forget about the missteps.

It also helps that he’s got quite the ensemble to work with, especially with the always radiant, always bubbly, and always charming Margot Robbie in the lead as the mysterious, yet somewhat deadly waitress. In a way, Robbie commands this movie and makes sure that everything revolves her character and her story – which works because she’s the most interesting character of the bunch. Her subplot with Pegg’s dying-character is a fun, if somewhat uneven bit that the movie has to offer and reminds us what you can do when you have fun-dialogue – all you’ll want to do is hear these two talk about whatever the hell is on their minds.

But what’s odd and is perhaps the big issue with Terminal, as a whole, is that this subplot is so interesting in and of itself, it could have been it’s own half-hour short and there wouldn’t have been any issues. However, as it is, it’s just a small slice to a much bigger pie, that not only has whatever is going on with the two assassins, but also with the janitor, and much more backstory into Robbie’s character. In a sense, these could have all been their own separate half-hour shorts, but for some reason, Stein decided to splash them all up together, see what stuck, see what didn’t, and move on.

As it is, it doesn’t entirely work. But hey, at least it’s a good enough time.

Consensus: With an odd, kinetic-style, witty dialogue, and a great performance from Robbie in the lead, Terminal works as a fun way to spend an hour-and-a-half, even if it doesn’t entirely work as a whole.