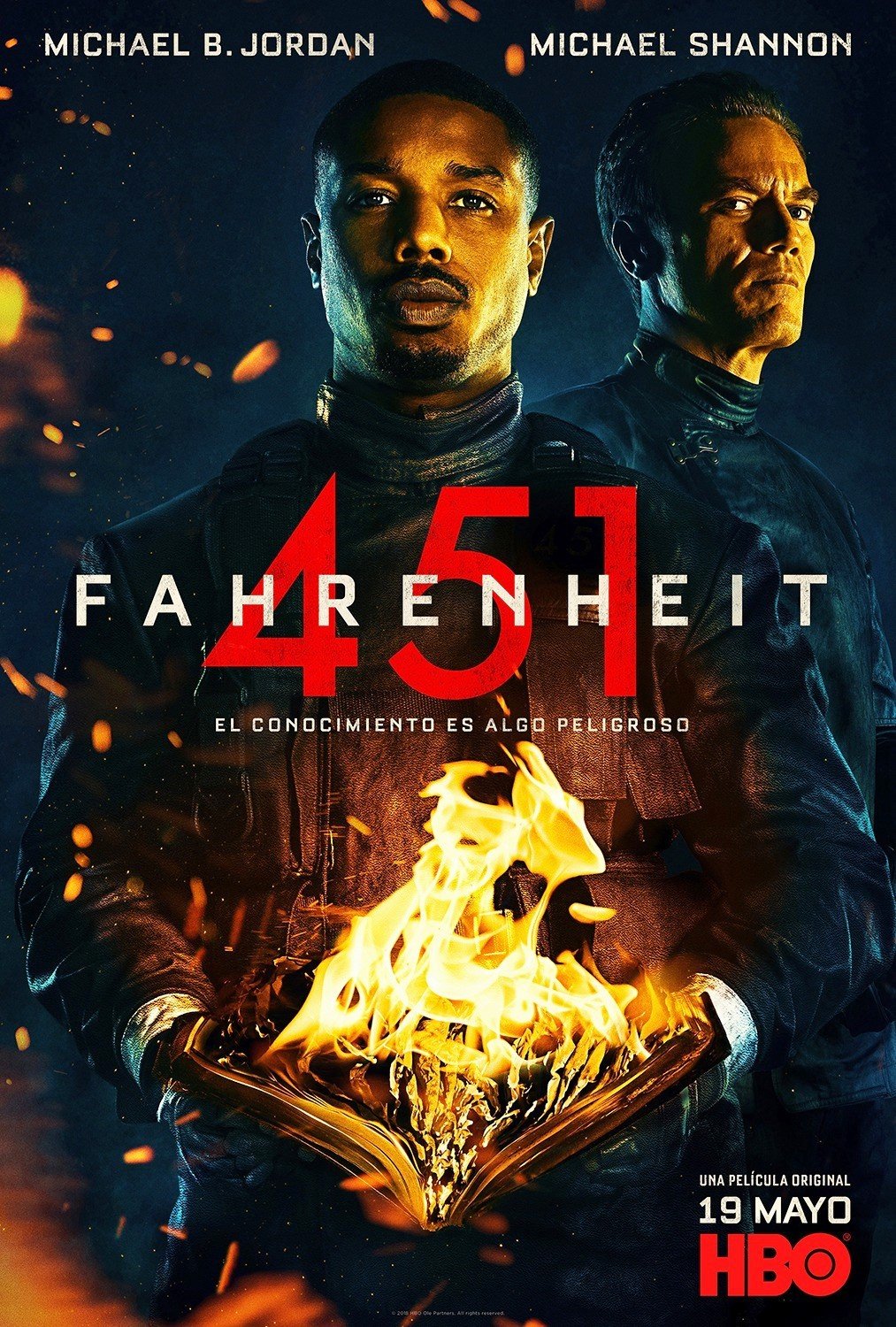 Who needs books when you’ve got reality TV?

Sometime in the future, all books of any form, shape, or size are banned. Why is that exactly? Well, books are giving the common, everyday person way too many ideas and it’s up to the government to remind the citizens what’s in their best interest and what should be thought. To help ensure that all possible traces of literature are taken away and burned, are so-called “firemen”, who do just exactly that: Light books on fire and arrest the book-smugglers. It’s an easy task and it’s one that’s become quite famous, with a TV show being broadcast nationwide to remind the world of the dangers of possessing books. It’s something that Guy Montag (Michael B. Jordan) prides himself in, believing that he’s doing a greater good for the world. But that all changes when he meets Clarisse (Sofia Boutella), an informant for the underground who may not just be as a conflicted as she lets on.

Given the A-list cast, interesting premise, solid director, it debuting at Cannes, and even somewhat being a remake of Truffaut film, Fahrenheit 451 had all the makings of a winner, despite it being broadcast solely for TV. But it becomes very clear early-on that it’s not going to live up to the expectations, nor is it going to come anywhere freakin’ close; it’s going to be a made-for-TV movie, plain and simple. But this time, with much more talent behind and in front of the camera to possibly get our hopes up.

But really, what’s the point? Fahrenheit 451 seems like it has possibly something mildly interesting to say about society, censorship, and the whole idea of book-burning itself (clearly taking cues from Nazi Germany), but they go all out the window once we realize that it’s something of a low-budget rip-off of Blade Runner, with cheesy CGI, not-so-subtle messaging, and a bunch of performances that, given the script to work with, really have no chance in hell of working.

And they don’t. Really.

Which is such an odd and damn shame because everyone here is so talented and every so often, you feel as if they’re going to overcome the shoddy material, but they just don’t. No one here feels like a real human in the slightest – just types and character-tropes for us to recognize and never really get to know, or sympathize with. For instance, Michael B. Jordan’s Guy (no literally, that’s his name) is another one of those hardcore guys who love the cause they’re fighting for, until they sniff something different and change they’re whole tune. He’s the savior, the hero character, and the guy we can calculate from the very first sight of him, and as great and as charismatic as Jordan may be, not even he can get past the fact that his character is just boring.

Same goes for Michael Shannon who, as the mentor and squadron-leader, is really just on auto-pilot. He’s mad, intimidating, and yelling a lot, yet, it doesn’t ever register; he’s a type and even worse, he’s a Michael Shannon-type, without any heart, soul, or reason to exist. Which is odd coming from director Rahmin Bahrani who, in all of his films, has shown that he’s able to get great performances out of his cast-members, which is especially all the more impressive when you realize that almost all of said films feature people who have never acted before. But for some reason, he doesn’t really drive his cast to give good performances and even he himself doesn’t really seem right for this material; the sort-of “indie-cred” and sensibility he could have brought to this, seems to get washed-away in a bunch of special-effects and sci-fi goofiness that not even Ridley Scott or Spielberg could have gotten away with.

Truffaut was able to, but hey, that’s because he was François freakin’ Truffaut.

Consensus: Regardless of an impressive cast and crew, Fahrenheit 451 falls apart from the very start with an odd direction, weak script, and general lack of excitement from just about everyone and everything involved.