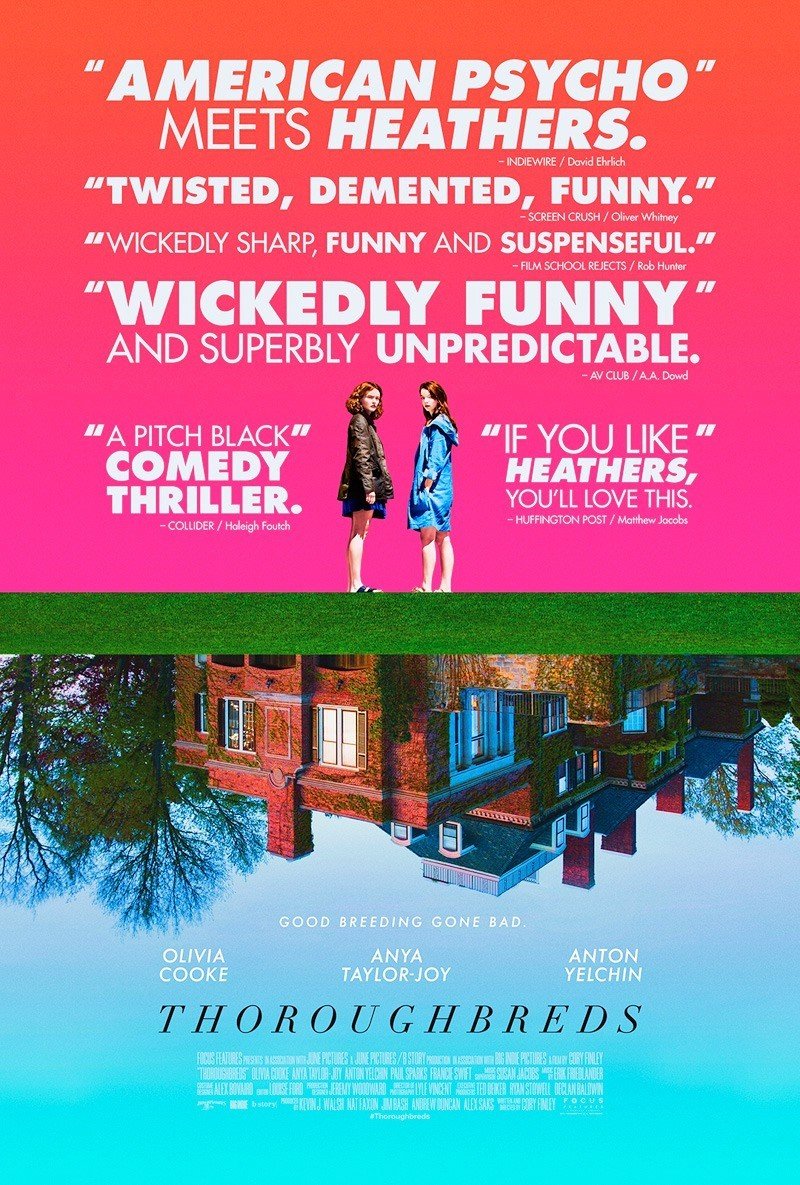 Always make friends with the psychos. No matter where you are.

In suburban Connecticut, where practically everywhere you turn is a fancy mansion or two, Lily (Anya Taylor-Joy) and Amanda (Olivia Cooke) rekindle after many years apart from one another. Lily’s a much smarter, more accomplished girl who got to finish boarding-school early, whereas Amanda had a weird tragedy beset her, which led her to miss a lot of school and in desperate need of catching up. So she does with Lily, but eventually, the tutor-sessions turn into something far weirder and more serious when the topic of discussion goes into death, murder, and what to do next. Then, local drug-dealer Tim (Anton Yelchin) shows up and together, they all plan a murder that will hopefully change their lives for the better, even if that’s not what always happens in those kinds of situations.

Thoroughbreds is the kind of directorial-debut that’s a little flashy, a little pretentious, a little too much at once, but also, a whole lot of fun to watch because it’s a movie where you genuinely don’t know where it’s going to go, or why. Those comparing it to Heathers are sort of missing the point – sure, the quick, witty-banter is still there, but Thoroughbreds is a much darker, more sinister movie on its own terms that doesn’t care about personal-taste. Granted, it’s not an outright horror film, but it teeters that line very close to where it becomes awfully intense and creepy.

Almost think of it as a Yorgos Lanthimos film, in all of the best ways possible. It’s a precise, cold, calculated, weird, tense, and incredibly stagey. But writer/director Cory Finley does a lot with his material here to where it feels and sounds completely fresh, even when the movie itself doesn’t always reach the ambitions he sets out for himself.

But hey, it’s his first-go and with Thoroughbreds, he impresses more than he disappoints.

Which is to say that Thoroughbreds is a funny movie, but not in the way you’d expect. A lot of the dialogue feels “written”, of course, but it’s meant to be; these characters take place in a certain world where everyone talks with such a precise manner, in such a certain way, using certain words, that it all makes sense. Even the way Finley frames his shots – with large-pans around the huge houses and rooms that literally trap and surround these characters – gives you the idea that the extravagant, lovely lives on the outside, aren’t so pretty deep down inside. Thoroughbreds doesn’t necessarily become an angry rant against the rich and upper-class, but once again, it comes close and it shows just what all that money can’t buy if it’s not already there in the first place: Happiness.

And to help display that idea more are two fantastic performances from Anya Taylor-Joy and Olivia Cooke, two actresses who are surely going to be taking over the world of Hollywood fairly soon. Both have a very deadpan, cold delivery to one another that makes it easy to see why they may stick it out as friends, but also why they didn’t totally stick together through all of the years; Cooke’s Amanda is much more psychotic and crazy-like, whereas Taylor-Joy’s Lily is less so and more subtle. Together, the two are great and work well this material, towing the line between adorable and pretty, but somewhat sinister, making you wish these two would continue to work in whatever else comes their way.

And although I wish I could say the same about the late, great Anton Yelchin in his last role ever, unfortunately, I can’tr. Still, as the local drug-dealer Tim, Yelchin adds a deal of heart and sympathy to a character who is otherwise creepy and borderline sickening. He reminds us that even though Yelchin himself had quite the sweet and adorable-like qualities and features, there was a darkness brewing underneath him, just waiting to come out.

Unfortunately, it never got to see the light of day. But if anything, Thoroughbreds proved to be a promising sign.

Consensus: With a biting screenplay that bounces back-and-forth from comedy, drama, and thriller, Thoroughbreds never makes up its mind of what it wants to be and it’s much more interesting for that reason alone.