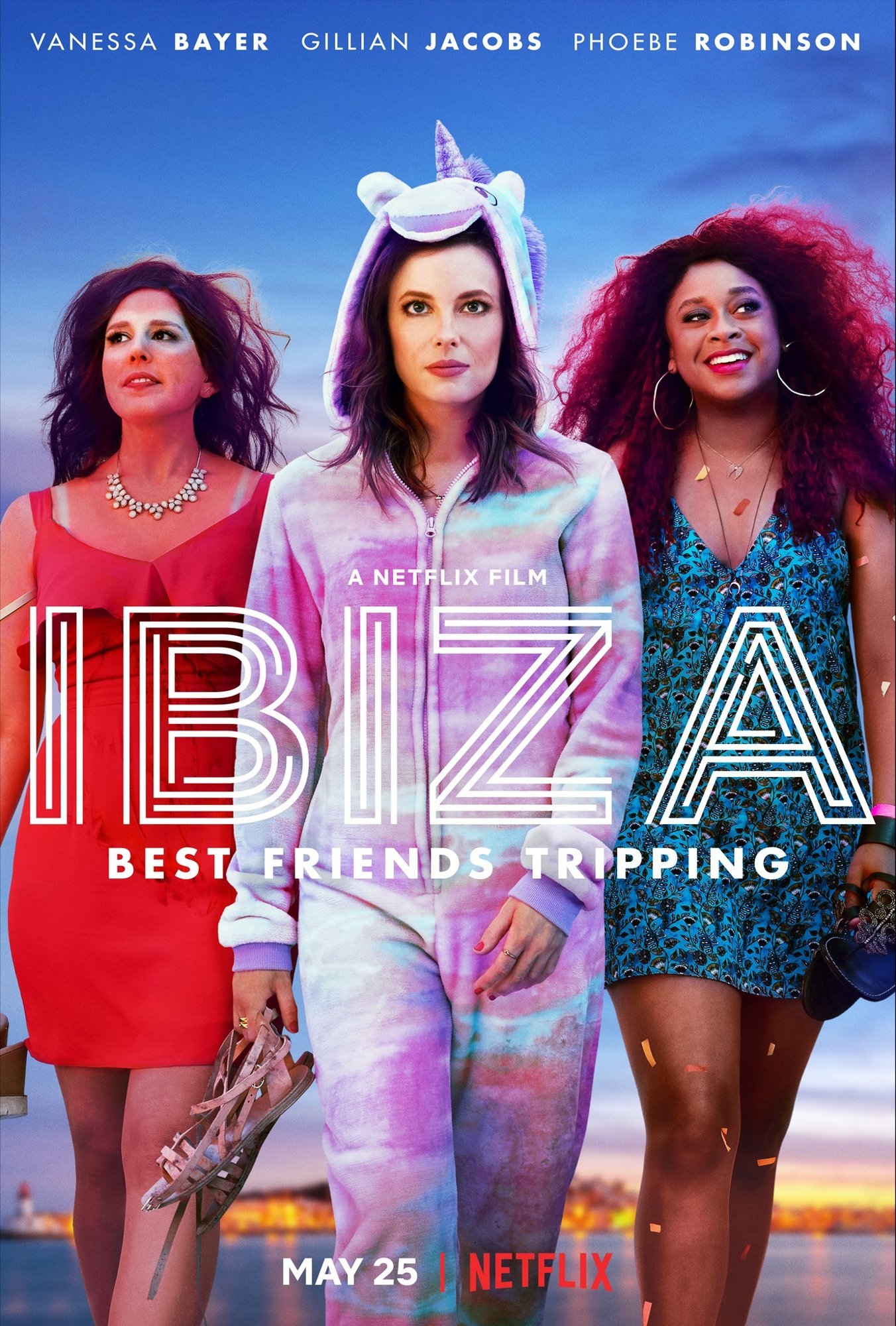 Nothing like partying with your besties in foreign countries and hot dudes!

Harper (Gillian Jacobs) is a 30-something single who has to get her life together a little bit and she’s hoping that this business trip she has to take to Barcelona will be just the swift kick that she needs. However, her two best friends in the whole wide world, Nikki (Vanessa Bayer) and Leah (Phoebe Robinson), decide that they want to come to, enjoy the country, go out, party, meet some hot dudes, and most of all, live life like they’ve never lived it before. Harper’s all for this, as long as she gets to her scheduled-meeting on the final day there, which looks like will actually happen and go according to plan, until she meets a handsome DJ (Richard Madden), and it all falls apart.

Ibiza is sort of half-knowing about its premise and how there are so many damn movies just like it. There’s even a moment where Jacobs’ character screams, “I’m a cliche!”, out of the sun-roof of a limo as it’s driving down a street. Yes, it is a cliche and most of all, it’s a boring one; though the movie likes to sort of poke jokes at the fact that it is what it is, does that make it any better? Better yet, does it make it worth watching?

Not really and as much as I want to give Ibiza the benefit of the doubt for doing its best to be sweet and charming, it never really goes anywhere that’s fun, exciting, or hell, interesting. It’s one long party-sequence, with some time in the middle to chill out, but because these characters are so cardboard in the first place, we don’t really care to get to know them, or whether or not they have a greater purpose in life. The movie only really seems to care about the jokes and wacky hijinx, with character-development coming very, very far behind in the race.

Which is why it’s so beneficial to have a likable cast on-deck, which Ibiza has. Problem is, they’re left without a paddle.

Jacobs in her first leading-role gets the chance to show that she can handle a movie, but is so wacky and goofy, she never feels like a protagonist in her own movie; she’s too schticky and weird, making her feel like a supporting-character that would show up every now and then, steal the show, and then move on. It’s hard to really connect with her, or ever follow her as someone compelling when, really, she doesn’t feel real. And it’s a shame because I usually love Jacobs in just about every little thing that she does and it feels like her surprising ability to go dark and serious with the drop of a hat, is rather lost here on a character that seems an awful lot like a Britta-clone, and not a very fun one at that.

Same goes for Vanessa Bayer and Phoebe Robinson, but in a way, they benefit more so from being the supporters here, because they can be as wacky and as crazy as they want, without the movie ever failing because of them. Bayer has some great moments that she seems to improvise and Robinson is fine, even if her character feels a lot like a type and once again, a lot less like an actual human being. Maybe I’m putting too much hope and faith in a goofy comedy to give me three-dimensional, fully compelling characters, but that’s how most comedies work: When you can believe the characters behind all of the gags, the bits, and the jokes. Without characters to really latch onto, then you’re just throwing a lot of stuff up in the air and expecting them to land in a certain spot, but without a bulls-eye painted.

Ibiza is that kind of comedy without any objective or purpose, and while some may appreciate that, for me, I need a bit more.

Consensus: Though everyone involved is likable and lovely, Ibiza is way too silly, conventional, and somewhat dull for its own good, feeling like it’s ripping-off a thousand other comedies, yet, without any real edge or creativity thrown into the mix.