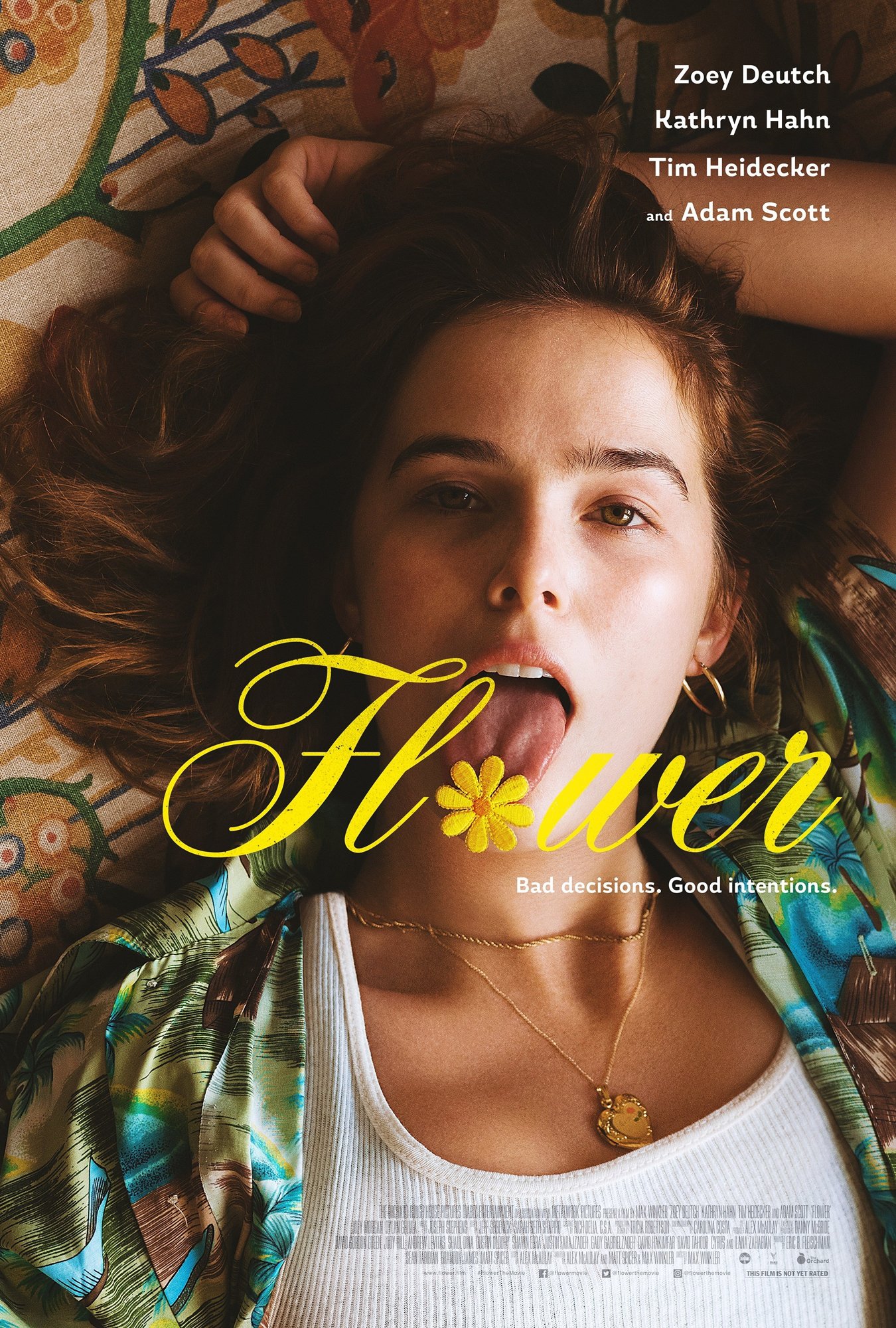 Damn teenagers these days with their sexual promiscuity.

Erica Vandross (Zoey Deutch) is a lot like other 17-year-old girls her age, in that she likes to be rebellious, mean, and always thinking/talking about sex. It takes over her life so much that she spends most of her time with her friends, planning out and setting up older men to blackmail them for coming on to underage-girls such as themselves. It’s a scam they’ve gotten away with time and time again and it’s one that they continue to work with, so long as there are creepy dudes in this world. And Erica’s latest “victim” of sorts, Will (Adam Scott), is a former teacher who was accused by her step-brother, Luke (Joey Morgan), of molesting him. Erica feels no remorse for this guy, that is, until she does and she has to wonder if she’s doing the right thing or not, and if so, for what reasons. Revenge? Or just pure, sexual pleasures?

It’s hard not to compare Flower to Thoroughbreds. They’re both dark, yet humorous takes on young, high school-age girls, who are quick-witted and also have a bit of a meaner side to them than we usually see from girls in other films. The only issue is that while Thoroughbreds seems like it has a point and was going somewhere, Flower never quite pulls itself together after the first initially great 15-minutes; it can only bite so much without forgetting to swallow and eventually, everything that the movie’s setting out to do, catches up with itself, leaving you wondering what went wrong and most of all, what was the point?

The answer is, well, there isn’t a point and that’s kind of a shame.

Writer/director Max Winkler, son of Henry, seems like he knows a thing or two about how to write snappy dialogue between a cast of colorful characters. Everyone here talks somewhat dirty, crude, rude and without much of an excuse and that’s refreshing to get in a movie, especially one that, on occasion, can be as funny as this. And it helps that he’s got such a great ensemble to help him out with all of the wordy dialogue, too.

Like, for instance, watching Zoey Deutch play totally against-type as the raw Erica is refreshing, if only because it seemed like her career was leaning more towards goody too-shoo roles. Now, Deutch is playing it mean, lean and without a care in the world of if she’s going to be the next America’s sweetheart; she reminds me so much of her mom that it’s scary, but it also kind of works in her favor because you see her as a much different of the young, sexually-free high school girl.

And everyone else surrounding her is quite good, too. Like Kathyrn Hahn as her somewhat emotionally broken mom; Tim Hedecker as her mom’s boyfriend who may or may not be a total dweeb; Joey Morgan as the awkward and depressed stepbrother; and especially, Adam Scott as Will, the possibly-rapey older-dude. But the issue is that when the movie really gets going with plot, it sort of forgets about all of these interesting characters and leaves them high and dry. It’s as if Winkler had a good idea for a story, characters, and a sense of conflict, yet, didn’t know how to end things in a smart manner. Everything’s there, but for some reason, it just doesn’t know how to work.

Maybe next time it will be better?

Consensus: With a smart, snappy cast of characters and performances, Flower works as a moderately entertaining coming-of-ager that still gets a little caught-up in its ambitions and loses track about halfway through.